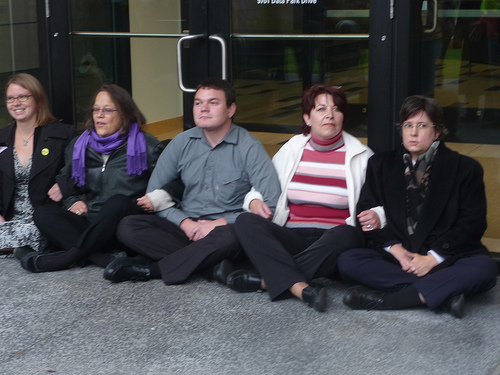 Shortly after 10 a.m. on Monday two yellow school buses pulled up in front of the corporate headquarters of UnitedHealth Group in Minnetonka. Roughly 100 people, carrying signs that read “Health insurance reform now,” filed off the buses. A half dozen protesters then locked arms, sat down on the sidewalk and blocked the entrance to the office tower.

“We’re here today at UnitedHealth group to stop business as usual,” Tee McClenty, an emergency room technician at St. John’s Hospital in Maplewood, told the crowd. “Why? Big insurance has a lot to lose if bold reform happens this fall. And it needs to. We’ve waited too long and we need a public option now.”

UnitedHealth Group is the nation’s largest private health insurance company. It has drawn the ire of reform advocates by spending more than $600,000 per day on lobbying efforts in Washington, according to the Center for Responsive Politics. The insurance firm has also been criticized for providing its top executive with lavish pay, including $744 million in stock options. The protest was organized by the nationwide coalition Health Care for America Now and was the third such event directed at UnitedHealth Group in recent weeks.

Additional coverage from The Uptake.

After about 20 minutes, a half dozen squad cars from the Minnetonka Police Department arrived on the scene. When the six protesters blocking the entrance refused to voluntarily vacate the premises, the police handcuffed them and transported them to the Hennepin County Jail. They were cited for trespassing. Among those arrested were Julie Schnell, president of Service Employees International Union Healthcare Minnesota, and Anna Brelje, political director for the Minneapolis Regional Labor Federation.