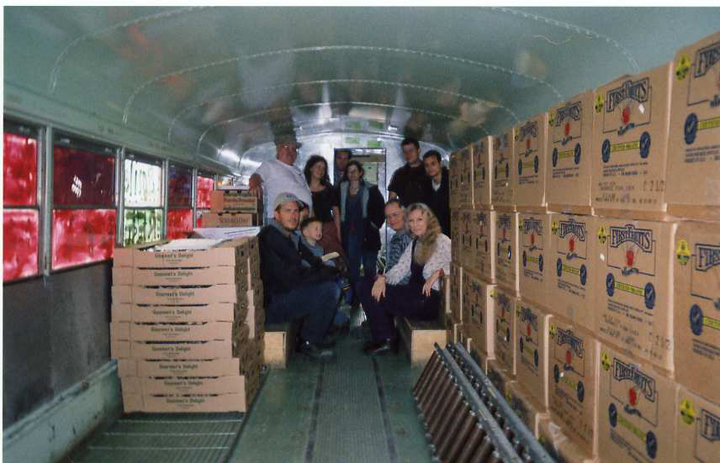 “People know us on the streets, recognize our bus,” said David Senn, a gardener and bus driver for Sisters’ Camelot, a working free organic food collective in Minneapolis.  “It is nice to feed people, especially starving people out on the streets.  It is satisfying to feed hungry people such good food.” Senn has been with Sisters’ Camelot for eight of the organization’s 14 years, working 10 to 40 hours per week as needed.

Every Tuesday and Thursday, the food share bus goes to impoverished Twin Cities neighborhoods to distribute free organic produce.  In the summer months, the distribution increases to four times a week.

“We go where there are lots of people, like Nicollet and Lake, Lake and Portland, Central or Broadway,” said Rob Czernik, a 10-year volunteer.  Volunteers show up to work at 11 a.m. on Tuesday or Thursday at 2657-32nd Street in Minneapolis.  Volunteers automatically become voting members of the collective and can voice their ideas at  weekly meetings.

The food share bus, a mobile food shelf, is the bulk of the work of Sisters’ Camelot.  No identification nor paperwork is required of those receiving the produce.  “You know people are feeding others when they take a large box of bananas back with them.” said Czernik.

The kitchen bus sometimes serves bands, community events, and support for other non-profits.  Powderhorn Park has an “empty bowl” event.  The idea is that people bring a bowl to be filled with food.  “We served between 500 to 1000 people including kids.  They ate soups, breads, snacks, and salad from Seward Coop,” said Senn.  “When nurses and transit workers were on strike, we fed them.”

Besides Sisters’ Camelot’s two gardens, their food comes from the warehouses of Seward and Wedge Coops, Albert’s Organics, and Co-op Partners.  Camelot has two garden plots at 5th Avenue and Lake Street and at 22nd Avenue and 35th Street South.

“It is not easy to have a garden on a city lot,” said Senn, a gardener. “It requires a lot of care to make it beautiful.  At the end of the day at Midtown Farmers’ Market, we ask the growers to donate their food to us.”

Sisters’ Camelot is totally volunteer except for paid bus drivers, an accountant, door-to-door canvassers, and an occasional mechanic and welder for their buses.  “We have between 20 to 50 volunteers per week,” said Senn.  Volunteers load unshippable food from the Wedge or Seward Coop to distribute out to the people on the streets or vacant lots in various neighborhoods.

Camelot has a grant from the Wedge for the kitchen bus.  “Ninety-nine percent of our funds come from door-to-door canvassing,” said Czernik.  We go every day asking for support.”

Sisters’ Camelot got their name from the book, The Mists of Avalon.  In 1996, Jeff Borowiak, the founder of the organization, needed a name for his project. He and his partner were reading Marion Zimmer Bradley’s book, which retells the story King Arthur and the Knights of the Round Table from a woman’s perspective.  “It is a gentler, kinder, more nurturing idea that just stuck with us over the years.” said Senn.

Their future plans are looking for more funding this winter, developing new and better interactive technology, having their buses run on veggie fuel, and winterizing their kitchen bus so that it can be used in the winter months.

“Why do we do this work?  It is the friendships that we have. Plus it is great feeding people,” said Czernik.  “People from out of town return to our space to help when they visit the Twin Cities.”