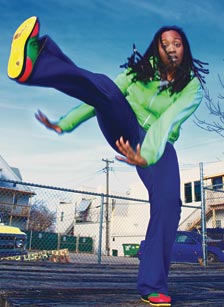 “Beware of people who have vision who can execute,” says Maia Maiden, the force behind “Sistah Solo,” an evening of performances featuring women of color at Patrick’s Cabaret in Minneapolis.

Maiden is the kind of person who is savvy enough to execute what she sets her mind to, and in the case of “Sistah Solo,” that means carving out a space in the Twin Cities arts community where female performing artists of color make their voices heard.

A clinical laboratory scientist by day, a choreographer and a producer by night, as well as mother of a young daughter, Maiden is a woman of many talents.

“It’s a challenge,” she said, “but it’s all about balance.” Juggling her work life and choreography while curating shows and being a mother means she’s a very busy woman, but whatever she’s doing, she gives 100 percent. “I’m about producing quality, not quantity,” she said.

As a performer and choreographer, she’s been featured at the Southern Theater’s 2008 “Momentum” dance works, at O’Shaughnessy Auditorium (“Snapshots: Reflections of Women”) and at Intermedia Arts’ B-Girl Be, a celebration of women in hip-hop. In addition to her work as an artist, Maiden also works as a producer.

Ever since she was a student at Apple Valley High School (where only 4 percent of the student body was African-American and where in 1995 she co-created a hip-hop dance team called Infinity), Maiden has sought to carve out her own niche.

In addition to “Sistah Solo,” she co-produced “Rooted,” an evening celebrating hip-hop choreographers both established and emerging as well as the roots of hip-hop dance. Last fall, she co-presented “This Was Meant for Women’s Bodies,” an exploration of body image featuring dance, music, words and film at Intermedia Arts as part of its Catalyst Series

In their own right

Maiden started “Sistah Solo” in 2011 as a venue for women of color to present their solo works. This year’s series includes 15 women of varying ages, Maiden said, each powerful in her own right.

She got the idea for “Sistah Solo” when she noticed that she was going to shows with a distinct lack of women of color on stage. The goal, she said, is to present the work of women of color not just as a fleeting moment, but as the main act.

Each of the women has up to seven minutes to perform, either one long piece or multiple pieces. All of the performances are solos with the exception of 14-year-old twins Iman and Khadijah Siferllah-Griffin. Maiden had seen them perform in the Twin Cities with hip-hop artist Brother Ali and wanted to share their work through “Sistah Solo.”

Maiden says she believes it’s important to have different age groups performing together. The “Sistah Solo” lineup includes both emerging performers-such as the twins and 16-year-old Amara Barner-and established performers, such as Kenna-Camara Cottman, Andrea Jenkins, Ellena Schoop and Tish Jones, who is the one returning artist from the last “Sistah Solo” event two years ago.

Maiden’s goal for the show is for the women to come together and have a “positive, powerful dynamic,” she said, and “show they are a force.”

Like her show “Rooted,” “Sistah Solo” takes place at Patrick’s Cabaret, which Maiden likes because of its intimate setting and affordable ticket prices, with money going toward the artists.

Said Maiden: “Our shows are about connection.”