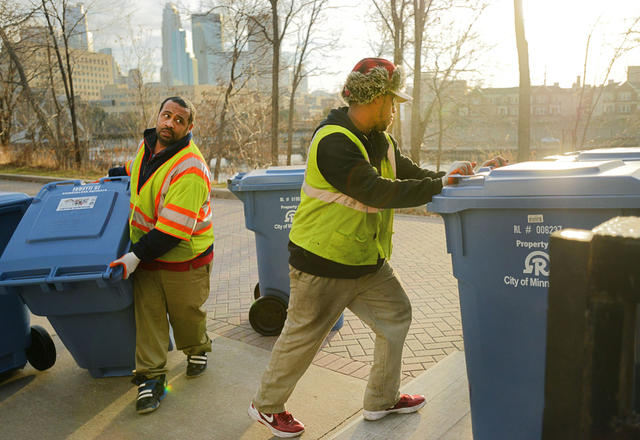 City of Minneapolis employees Keith Barker, left, and Darius Locke remove leftover one-sort recycling carts Nov. 21 on Nicollet Island in Minneapolis. Some residents in neighborhoods surrounding the University should see their new carts as soon as this week. (Photo by Emily Dunker)

The Minneapolis Department of Public Works started distributing 30,000 blue 95-gallon carts to residents Nov. 12 as part of the transition to one-sort recycling.

This is the first phase of the program, which will be completed by Saturday. The department will distribute 110,000 more in spring 2013.

“By making it easier to recycle, we expect to collect more recycling and less trash from folks who don’t recycle yet or who don’t recycle as much as they could,” said Michelle Chavez, the project’s coordinator.

Residents in the Prospect Park and Marcy-Holmes neighborhoods will get carts this week, while others, like in the Southeast Como area, will get them in the spring.

“One-sort recycling is being rolled out in pockets all over the city,” Chavez said. “This is the most efficient way to roll out because it keeps existing routes and current collection days intact.”

University of Minnesota journalism sophomore Devan Grimsrud said the new program will benefit students because it’s less confusing than the prior seven-sort system.

“I think it will be a good thing for students because I know it’s hard for us, sometimes, to figure out where to put something when we’re recycling,” said Grimsrud, who is vice president for the University’s Green Group, which promotes environmental protection and sustainability.

Grimsrud said some people don’t recycle “because it’s not easy,” but the new program allows people to “throw all their recycling into one thing, making it a lot easier.”

Jared Sipe, a material science junior and member of the University’s Active Energy Club, said he found the blue cart he received more convenient even though he was “used to sorting.”

Other members of the club, which is devoted to conservation and alternate forms of energy, agreed the change would save time for people who recycle.

“I think the benefits will be long-lasting, especially since this will really open up the conversation of sustainability and environmental awareness,” said biomedical engineering senior Chelsey Shoup, an officer for the club.

The city’s current recycling rate is 18.1 percent — about 17 percentage points short of the 35 percent goal set by Hennepin County, according to a Dual Sort/Single Sort Collection Study created by the city last spring. The new program is projected to increase the rate to 32 percent.

In the study, the department compared Minneapolis to other cities already using the one-sort program, like Ann Arbor, Mich.

The report found that while Minneapolis has a “fairly good” participation rate for recycling, compared to other cities, it’s “far below the regional and national average.”

Ann Arbor had a 15 percent increase in its weight of recyclables when it switched in 2009 from dual-stream bins — which St. Paul’s program currently uses — to single-stream carts, Chavez said.

She said crews pick up and recycle about 18,000 tons of materials each year in Minneapolis, and the department is working hard to make the number grow. It would like to see a 60 percent increase in the quantity of materials recovered by 2015, she said.

“Minneapolis is characterized by a fairly high average participation rate, but a low quantity per household,” the report said.

Chavez said the new one-sort program will make rates “go up substantially because it’s going to be so much easier for citizens to use.”

“A lot of people in Minneapolis already recycle, but for more than 10 years our rates have stayed the same and in some years have even gone down,” Chavez said. “We definitely think we will see an increase in rates with the new program.”

Residents will receive a letter detailing the instructions for the program one week before their cart’s arrival. Until then, the city asks customers to continue sorting their recyclables as usual.

The first day of pick-up for one-sort recycling is Monday. The new program will not affect recycling customers’ pick-up schedule.