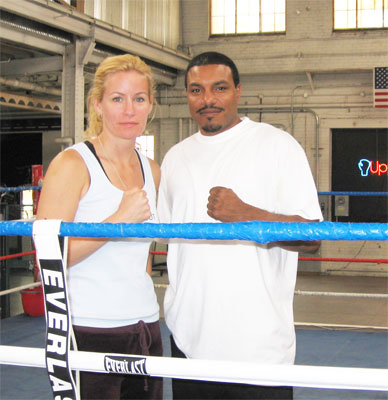 “It’s all about giving back,” says Jacques Davis, volunteer boxing coach at the Uppercut Gym in North Minneapolis. We’re sitting in an office at the Volunteers of America alternative school where Davis works. Funny thing is, as Davis continues talking, I don’t hear that he received a whole lot as a child. I start to wonder who filled his tank so that he could turn around to fill others’.

Although it might have been only a tiny break, somewhere along the way Davis saw an opportunity. It was enough for him to push open the door and barrel on in. “I didn’t have a lot of the right people when I was growing up who could guide me. And I didn’t have nobody telling me certain things, but it was so square to me at the time,” Davis says.

“School, college, all my uncles, everybody, going to be doctors, something. Everything was so right.”

So what happened? “I started to drift,” Davis confesses. “I hung around the wrong people. Nobody was really pushing me, telling me, ‘You’re good at this. You should keep going; you should keep trying that.’

“I became a parent at 14,” he continues. “Before that, I was into damn near every sport. Boxing was like natural [to me], but because I was told that I couldn’t hang [out], couldn’t drink or smoke, couldn’t be with girls, I was like, ‘I’m done with you.’ It was the gym policy. The coach was trying to make us pick and choose, and I chose the dark side instead of the right way to go.”

So now Davis, 36, a single parent to six children, tries to give the encouragement to others that he didn’t hear as a youth. “Having the elders always ask, ‘How many kids you got, now?’ — there was always an icky feeling when they’d say that. It was shaming, and I felt like I should’ve been doing better. Having [my own] kids helped me to balance or refocus on what was important. I was working nights and trying to go to school, [and it was] kicking my ass. I told myself, ‘Either change, buddy, or continue to have this dead-end life.’”

Davis spends what little spare time he has coaching kids as they learn to box. Boxing, Davis feels, improves the fighter’s virtues. “In terms of the behavior…it’s the confidence, the respect, the sense of pride and belonging” that result from the time a coach spends with the fighter.

But why boxing? Why not something that doesn’t involve fighting? Davis replies, “Boxing is a sport, like football, or rugby or any other sport. There’s gonna be contact. You gotta learn how to do it. I’m not into the violence on the streets, but boxing is an organized fight.”

Muhammad Ali played the part of a hero for many in the ’60s and ’70s. “As a kid, a little boy, I looked up to Muhammad Ali,” Davis remembers. “I was impressed with the way he spoke, the way he came off. I idolized him.”

Still, with half a dozen kids of his own, finding time must be a challenge for Davis. However, his oldest child, Jacques Jr., is 22 years old and trains and fights at the Uppercut Gym. “My son, he got me back into boxing; I had left it,” Davis says. “They’d [Uppercut Gym] been around for a long time, and they’d been helping inner-city kids, if you wanna call it that, for years; and I think that should be recognized, more so than me. If it wasn’t for Pete and Chuck Daszkiewicz, a couple of brothers who coach here, I wouldn’t be in the position I am in.”

Lisa Bauch, owner of the Uppercut Gym, says that the volunteer coaches at her gym mostly are active fighters. She has eight coaches; the oldest is 83 years old and still boxing. “It’d be rough, very rough without these guys volunteering here.”

Lots of the kids who participate in boxing have their fees covered by Lisa and the other coaches. But funding comes from other sources than participant fees. Renting the gym for different events such as office parties and events, bringing bands in to perform, and providing programming for the YMCA, YWCA, and Girl and Boy Scouts all help to make the Uppercut Gym a viable boxing venue.