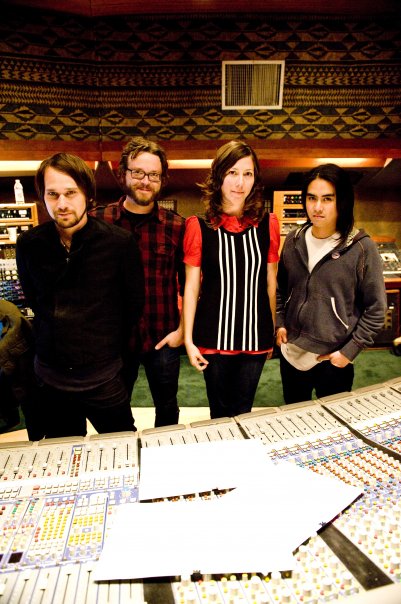 A three-act bill promised an interesting evening September 20 at the State Theatre in Minneapolis with Silversun Pickups, School of Seven Bells, and Atlas Genius. Regrettably the show’s promoter should be sued for breach of said promise.

Atlas Genius, relatively unknown Australians, handled themselves quite well in their Twin Cities bow, executed a deft half-hour of engaging alt-rock pop.  While hinting slightly of Gin Blossoms, the guitar, piano, bass, and drums quartet left their own signature with one bright, upbeat number after another, showcasing impassioned vocals in a warm sound powered by persistent energy. Particularly tasty were the guitar and drums.

Band leader and singer-songwriter Keith Jeffrey proved you don’t have to have a lead guitarist to make the sings string, strumming and stroking tight enough to make chording work just fine.  Drummer Michael Jeffrey, without once overdoing it, kept things snapping with a judicious flair for brisk fills. Their brother Steven Jeffrey (bass) and Darren Sell (keys) hell up their end of things fairly well, too. The band, promoting their EP Through The Glass and giving a preview of their upcoming full-length album, served strong notice that they’re here now with a solid presence and are about the business of making that presence well known. Look for Atlas Genius. You’ll find yourself some pretty good listening.

School of Seven Bells (out of NYC) ought to send their sound engineer back to class, because whoever was doing the mixing couldn’t handle a high school dance. It took half of the 45-minute set for the drums, piano and guitars to stop drowning out lead vocalist Alejandra Deheza. By the time you could hear her, it turned she doesn’t have a great voice but it is adequate. Actually, the sound was reminiscent of the Twin Cities’ own Jessy Greene (who was carving out a nice little singer-songwriter career until she absconded to go running around the world as part of Foo Fighters)—except that while the songwriting is proficient, even interesting at times, Deheza‘s voice doesn’t have very much body to it, which made it all the more important that the ears at the board finally figured out how to balance things.

A distracting drawback was how inexplicably self-impressed Deheza was, preening all over the place, tossing her head to and fro (how she avoided snapping her own neck is a damned good trick). Same thing for guitarist Benjamin Curtis, shuffling and shifting, going through histrionics like he was actually doing something of significance beyond plucking chords and singing backup.

There was plenty of that to go around for the headliners as well. Throughout their 90 minutes, three-quarters of Los Angeles band Silversun Pickups clearly thought they were the cat’s pajamas. Drummer Christopher Guanlao flailed away in manic abandon, hair flying and, in reality, not accomplishing much at all. The bass player, Nikki Monninger, in a spasmodic show of excess energy, looked for all the world like she’d been afflicted by St. Vitus’s Dance. Frontman Brian Aubert was just about everywhere at once, prowling the stage, basking in delusions of competence, indeed, imagined glory. The only one behaving sensibly was the keyboardist, who simply sat there and did his job—not that his chops were any more serious than those of the others.

The whole hour and a half was much ado about very little music that was loud enough to drown out a jet and Aubert’s yelling and screaming that passed for singing. Oddly, enough, the band waited until the encore to do two songs on which he actually sang, coming across bright and clear on the only tunes that had a viable melody to them.  Returning to form, the third song in the encore went right back to creating as much noise and little music as possible.

The night didn’t end as a total loss. After all, there was Atlas Genius. While, no, they weren’t geniuses, they were pretty damned good.