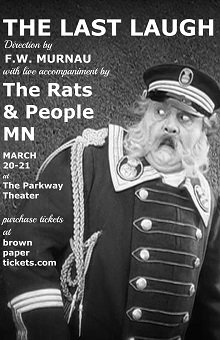 What happens to a man when he defines himself entirely by his job and then loses that job? What place does he have in his community when his old identity slips away? The 1924 silent German film The Last Laugh explores these resonant, universal themes, telling a story of a pompous hotel doorman whose world crumbles when he loses his position and gets demoted to the job of washroom attendant. One of the silent era’s most influential masterpieces, the film will be screened at the Parkway Theater in Minneapolis the weekend of March 20-21, 2015, with the Rats and People MN providing live musical accompaniment.

Critic Roger Ebert described The Last Laugh as “one of the most famous of silent films, and one of the most truly silent, because it does not even use printed intertitles.” Silent filmmakers prided themselves on telling stories with pantomime and effective imagery and minimizing the number of written titles inserted into the action. Director F. W. Murnau took things to brilliant extremes, letting camera shots and angles, facial expressions, and physical movement do the work of storytelling and using exaggerated scale and camera motion to emphasize his main character’s shifting emotional states.

Cinematographer Karl Freund (famous for his work on Metropolis, All Quiet on the Western Front, and later, I Love Lucy) “liberated the camera from gravity,” as Roger Ebert put it, mounting the camera on a swing to get one shot that creates a floating sensation. In other highly influential shots, the camera swoops down an elevator and out through the hotel lobby, then moves through the plate-glass window of a hotel manager’s office. Leading actor Emil Jannings was at the top of his game when he made the film, giving a truly heart-wrenching performance as the doorman spirals down into despair.

Rats and People violinist Beth Dill compares the film to Arthur Miller’s Death of a Salesman. “It’s so raw and real,” she noted. “Be prepared to be heart-broken. It hurts every time we see it.”

For this screening, the Rats and People MN’s musical accompaniment will feature a bit of a technological twist. The Rats and People MN typically features about a half-dozen musicians. This time, violinist Beth Dill and percussionist Seth Hayek will be performing as a duo, accompanied by digital recordings of themselves playing the score’s other musical parts.

Why the unusually lean line-up?

Dill explained, “We approached the Parkway and got a date, and then when I asked the band for the date, everybody was busy. It was terrifying.”

Still, Dill and Hayek decided they could give this showing a go, with a little digital boost.

“It’s going to be a pared-down sound,” Dill noted, “but Last Laugh is a very sad film, so a bit of it works. It’s intimidating, but we’re going to pull it off. It’s just going to be a little more pre-recorded than we’ve ever done before.”

Dill is enthusiastic about the opportunity to accompany a film at the Parkway Theater, which adjoins Pepito’s Restaurant.

“We love playing at the Parkway,” Dill said. “We like that it’s connected to the restaurant and bar. I think that kind of relaxes the atmosphere, just having a drink in hand to enjoy. The acoustics are fantastic.”

She and Hayek both praised theater proprietor Joe Senkyr Minjares, a longtime actor and stand-up comedian.

“He’s an artist himself,” Dill noted, “and he just kind of gets it. He’s just great to work with, a good guy to hang out with. He treats us like royalty.”

One of the biggest controversies surrounding The Last Laugh (aside from the fact that leading actor Emil Jannings eventually became a Nazi supporter in real life) is its ending, which I won’t disclose to avoid spoilers. Many filmgoers and critics have found the ending unrealistic and think it mars an otherwise masterful film.

“That’s the polarizing part of the film, the end,” Dill observed. The Rats and People MN toyed with the idea of simply stopping the film at the spot they think is a more appropriate ending. “But Murnau included it, so we do.”

If nothing else, that polarizing ending should provide some good fuel for post-film conversation–perhaps over drinks next door at Pepito’s.

The Last Laugh screens Friday, March 20 and Saturday, March 21 at Pepito’s Parkway Theater, 4817 Chicago Avenue South in Minneapolis, with showtimes at 7 and 9 pm each night. Tickets are $8 and can be purchased in advance at brownpapertickets.com. Visit www.parkwaytheater.com for more information.