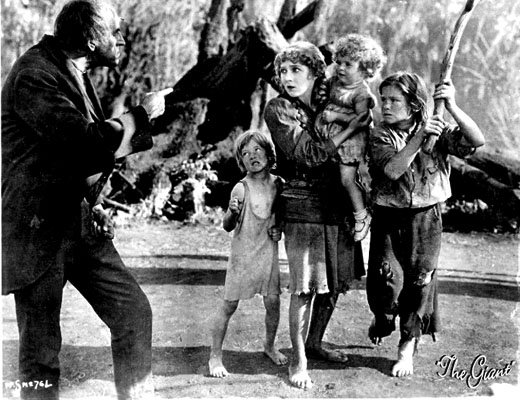 In the mood for some good old-fashioned melodrama, with snapping alligators, quicksand, and the kind of villains you can’t help but boo and hiss? Then be sure to head to the Heights Theater on Sunday, June 14, at 7:30 pm, when the theater will screen Mary Pickford’s 1926 silent classic Sparrows from a Library of Congress 35mm print.

The film tells the story of a young girl named Molly trapped at a backwoods Louisiana “baby farm,” where orphans are held captive by the merciless Mr. and Mrs. Grimes, played by Gustav von Seyffertitz and Charlotte Mineau. After Molly stands up to Mr. Grimes and threatens to run him through with a pitchfork, he drives her and the other children into the swamp, assuming they’ll die there. But led by Molly, the orphans embark on a harrowing quest for survival and maybe, if they ever make it out of the swamp, a better life.

Karl Eilers will accompany the film on the Heights’ magnificent Wurlitzer organ. Admission is $10.

Mention the name Mary Pickford to most people, and if they’ve heard of her at all, what comes to mind are her long golden curls and her penchant for playing little girls. At first glance, Pickford may look like a sugary-sweet relic with no relevance for today’s women.

The truth is that Pickford was a trailblazing Hollywood pioneer who wielded tremendous power behind the scenes–and whose characters were almost always busy fighting injustice, exposing cruelty, and generally raising hell.

Born Glady Louise Smith in Toronto, Canada in 1892, Mary Pickford was the primary breadwinner for her family from the age of seven, hitting the road in touring theater productions and missing out on anything resembling a real childhood.

“I’m the father of my family,” she told producer David Belasco at age fifteen, when she parked herself in his office and wouldn’t budge until he agreed to give her a shot at Broadway.

When Pickford made the leap from the stage to the fledgling movie business in 1909 at the age of seventeen, her acting and her arresting looks quickly caught film fans’ attention. Unlike many trained stage actors, Pickford understood that acting for film called for subtle gestures and understated reactions, and her insights helped her thrive in the movies when many other stage actors failed.

As director George Cukor once put it, Mary Pickford was a Method actor long before the Method was even invented, living and breathing her characters. By 1914, she was the most highly paid actress in the world.

Pickford was better than perhaps any other actor at portraying much younger characters believably; her good friend Frances Marion thought that by playing children, Mary got to experience some of the childhood she’d never had. But Mary also played fierce, feisty grown women who epitomized the rising strength and changing role of women in the early twentieth century.

In The Pride of the Clan, Pickford portrayed a Scottish clan leader who hounds the men of her village to church with a whip (I can’t help but think of the women of the then-active temperance movement, insisting that their men would be better off if they headed to church instead of their local saloons).

In Tess of the Storm Country, Pickford’s shanty-dwelling Tess defends poor tenant farmers from a greedy landlord, adopts an illegitimate baby, and pretends the baby is her own to protect the baby’s real mother–who just happens to be the greedy landlord’s daughter. When the baby is on the verge of death, Tess shocks her town’s church congregation by striding to the baptismal font and baptizing the baby herself.

In Daddy-Long-Legs, Pickford played a rebellious orphan named Judy Abbott who strikes back against the degrading, miserable conditions at her orphanage and ends up attracting a rich, anonymous patron who pays to send her to college. Judy finds fame and fortune as a novelist and writes a check to her sponsor to settle her debt to him. In this Cinderella story, the prince doesn’t rescue Cinderella; she sits down at her typewriter and saves herself.

Pickford’s character in Sparrows is firmly in the lineage of strong Pickford heroines, and the film itself offers many cinematic riches, including darkly atmospheric cinematography by legendary cameramen Charles Rosher, Karl Struss, and Hal Mohr and an unforgettably spooky set by designer Harry Oliver. As Mary Pickford biographer Eileen Whitfield put it, “The Sparrows set is redolent of mud, muck, snaky vines, staleness, dust and heat. . .Still, for all its creepy details, Sparrows has a strange, almost lurid beauty.”

When Sparrows first came out, many of Pickford’s fans were upset that America’s Sweetheart had made such a dark, disturbing film. Variety carped, “There isn’t a ray of brightness”–a charge film historian Kevin Brownlow points out ignores the many moments of comedy in the film. Many moviegoers fretted that Sparrows’ child actors must have been exposed to terrible deprivations and dangers while making the movie. They weren’t, but it’s a testimony to the film’s realism that people fretted.

Today, many critics and film buffs consider Sparrows one of Pickford’s best, perhaps even her masterpiece.

On June 14, moviegoers will get the rare opportunity to see Pickford the way she was meant to be seen–on a big screen, with live musical accompaniment and an audience to heighten the onscreen action with their own spontaneous responses. The fact that the Heights Theater opened in 1926, the same year Sparrows was released, should make for one very memorable night of cinematic time travel.

For more information on Mary Pickford:

Without Lying Down by Cari Beauchamp (Scribner, 1997)

Pickford: The Woman Who Made Hollywood by Eileen Whitfield (University Press of Kentucky, 2007)