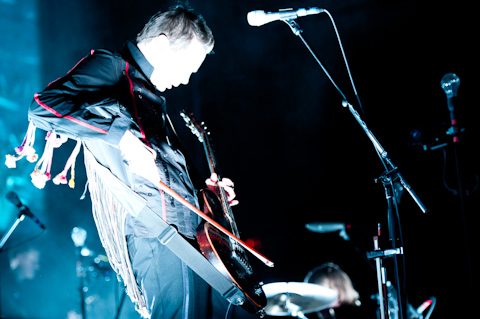 There were moments during the Sigur Rós concert at Roy Wilkins Auditorium where the bass and percussion permeated into my chest, where the vocals and strings opened the pores of my skin, where I felt completely transported by the multidimensional sound. I’m not exaggerating when I say those moments felt like a religious experience of sorts—and this is coming from an atheist. The Icelandic band has the ability to completely take you to another place.

I think that’s why I’ve favored the band as yoga music for years—because their sound is so rich and stirring emotionally, I love to use it to aid in my little breaks from the real world. Plus, because I can’t understand the lyrics, it effectively serves as an ambient sound that I love to use as background music.

Now, I will admit that at times I got a little bit restless at the concert, maybe because I’ve conditioned myself to be doing something else while I listen to them in my life. I yearned to know what they were saying, honestly, to let me in to what they were trying to communicate. I thought—couldn’t they have superscripts? But, I supposed that wouldn’t work especially because often they aren’t even speaking Icelandic but actually a nonsense language the band created called Vonlenska, or Hopelandic.

I did quite like the new “metal” sound the band is introducing on this tour, although to be honest, the metal sound still carries with it that angelic fullness that characterizes their usual style. Brennisteinn had a definite industrial quality to it, and Kveikur (also the name of their new album coming out in June) had a strong percussive sound that propelled the music forward.

I’ll also make a note about the terrible acoustics of Roy Wilkins Auditorium. Now granted, I was up in the balcony, so perhaps my experience would have been different down on the main floor. But sometimes I felt somewhat removed from the experience I should have been having because the sound didn’t quite reach me adequately.

Still, I adjusted to the circumstances and very much enjoyed the concert. There’s a lot to love about the band. The sheer number of musicians, for one thing—from string instruments to brass instruments, percussion, keyboard, and bass—lend to a complex, full sound that honestly had more than one college kid in tears by the end. And Jónsi Birgisson’s falsetto glory and badass mastery of the bowed guitar cannot be beat.