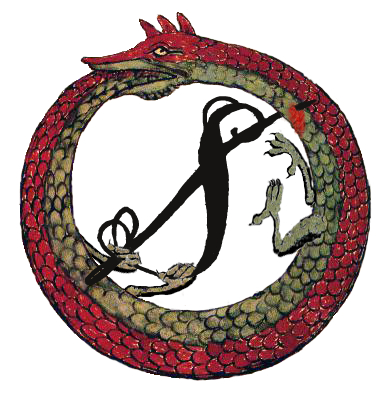 While the Twin Cities are always considerably bookish (obvs.) there’s something in the air this spring that’s making publications, events, and organizations breed like crazy. Just in June alone the Twin Cities are booked with events launching the Whole Beast Rag, Double Barrel magazine, and Thirty Two magazine, not to mention that Northern Spark is bringing it with literary events from Rain Taxi, as well as the Loft and Paper Darts (both places where I work) and heck, even the Literary Death Match is coming back for sevenths! I mean, holy dang, is this city is insatiable when it comes to words and nerds or what?

Getting prepped, too, to rush into the lake of Minnesota’s welcoming and avid readers are the minds behind Sic Semper Serpent, an umbrella organization that houses a myriad of creative components, each one aimed to please dovetailing sensibilities. This June, Tom Crouse and Kevin Haugen—long time friends from Morris, Minnesota, who both attended University of South Dakota—are setting not one, but two publications afloat into the world, and that’s just the beginning. While most new publications are situating themselves around existing online or in print, Sic Semper Serpent is planning things that exhibit a kind of naïve (not to say insane) drive that is a delight to witness.

Under the title of Sic Semper Serpent, Crouse, a former theater major, and Haugen, a designer and photographer currently living in Portland want to print books, package comics, start a production company, reprint works from the public domain in handmade hardcover, and publish everything under the sun, from pictographic novellas to Crouse’s own Indiana Jones inspired adventure novel. But this month, the duo will start with Spontaneous Combustion and The Fugue.

Together, these publications are, to Tom Crouse’s mind, “sister publications” and “polar opposites…like Yin and Yang.” Born of a monthly part-curated, part crowd-sourced short story slam competition, Spontaneous Combustion (or SpoCo as it’s also called) is meant to be an uncensored, gritty publication that hopes to (like all of SSS’s projects) put “literature back into the hands of the people.” The first volume, set to be on local shelves by mid-June, is full of stories from an April event (two, actually) held at Magers & Quinn where participants were supplied with three components each story must include and then sent away for 24 hours to come up with a story. Out of the stories turned in, Crouse and Haugen (along with Crouse’s mom) selected 15 finalists to read their stories at a second event at the Uptown bookstore, where the crowd selected their ten favorites of the bunch. All ten will be published in the upcoming issue of SpoCo, and the three authors with the most votes from the event will receive royalty contracts. Crouse says that hopefully these SpoCo events will happen bimonthly.

On SpoCo’s off months, Sic Semper Serpent hopes to publish The Fugue regularly. The opposite of its sister, The Fugue—which will be launched in late June with another event at Magers & Quinn—aims to be a little more refined, curling towards the arts and culture side of things. Crouse says that its inaugural edition will hopefully include three stories, three poet showcases, feature a photographer, an illustrator, and a painter, and have a feature about a mysterious photographer/poetress, as well as interviews, and a few cartoons from cartoonist in Sioux Falls, South Dakota.

If you’re thinking that already, between these two bimonthly publications, all the events involved, and having time for regular work, Crouse and Hagen might be taking on a little too much for two dudes who live half a country apart, then you and I are on the same page. However, Crouse seems to be planning to far into the future, and taking such care to ensure that he and his partner don’t burn out at the eleventh hour, that when talking to him it’s easy to forget that the word “failure” even exists. Who knows, maybe in addition to drive, purpose, good ideas, and tenacity, the secret to success is also hidden in those eight hours each night that many of us take for granted. “I’ve always been a natural insomniac,” Crouse says, “and I’d rather be awake doing something instead of, well, whatever other insomniacs do.”