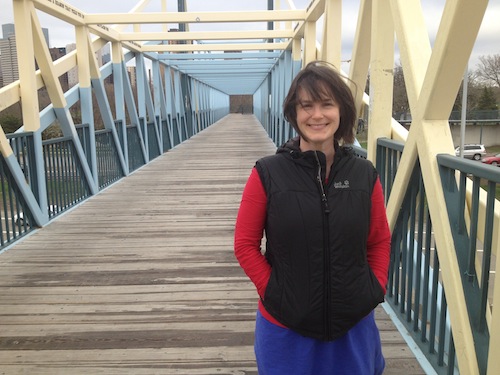 Last week, I met Sibyl Kempson on the day of her arrival from Brooklyn as she began final rehearsals for the preview performance of Fondly, Collette Richland at the Walker Art Center. She’s a petite, exuberant firecracker of a woman, and we immediately dished about arts education policy, the economy, sexism, and a number of other political, artistic, and social topics as we walked across Loring Park to have a drink.

Kempson’s work as a playwright on the production marks a departure for the company Elevator Repair Service (ERS), which has gained notoriety from their experimental performances drawing from non-theatrical texts, such as novels, written mostly by dead white males. Kempson said director John Collins approached her and said that he was interested in working with a living female playwright, and she “was the gal to do it,” she said.

Kempson first performed with ERS in 2002 in their production of Gatz, a six-hour devised performance based on the novel The Great Gatsby. She dropped out of the show when she started graduate school and her mom got sick, but later filled in for one of the cast members of the same show, which went on to be extremely successful as a different role. She performed off and on in Gatz for 10 years, and also collaborated with various company members on different shows in contexts outside of ELS.

Knowing all of the performers so well influenced the way that she wrote the work, Kempson said. “I love them all so much.” She felt it was both a privilege and a challenge to write with the performers in mind, as she wanted to give each of them as juicy and substantial part as possible. As a result, the dramatic text ended up being quite long.

Working in development with Collins, Kempson says she’s generally fairly quiet during the rehearsal process, offering background information, and speaking up on occasion. “We have a short hand of working,” she said. While Kempson has written the dramatic text, Collins shapes the piece and creates the performance script, what the actors actually say on stage.

When ERS decided to take on Ernest Hemingway’s The Sun Also Rises, Kempson raised objections, in part because there were other female authors she felt would have been more interesting. One of those authors is Jane Bowles, a contemporary of Hemingway who was friends with Tennessee Williams, Truman Capote, and Jose Contero. Bowles was highly tuned to the metaphysical.

When the company signed on Kempson as a playwright, she brought in Bowles’s work as a performance text, and the company, accustomed to working from novels, did a reading, much in the style of their previous devised work, from the text. The reading was enormously successful, and Kempson said she asked Collins if he wanted to forget about her writing a new piece and just work from the Bowles text, but he told her he wanted to see what she could do.

Kempson writes in both a feminine and a feminist way, she says. She began the writing process focusing on atmosphere, and the time in history. “I was doing this impulsive, weirdo writing,” she said: scribing long, impulsive letters, though she didn’t know quite what they meant.

One day, inspiration hit, and she saw two performers in a domestic situation. “It was Jane Bowles boiled down to the lowest common denominator,” Kempson said. “That’s how I started writing the actual play.”

Kempson was also inspired by Mary Shelley, as well as critical writing of Shelley’s work. One particular essay caught her eye especially. It’s an essay by Susan Winnett, called “Coming Unstrung: Men, Women, Narrative, and Principles of Pleasure,” in response to another essay by Peter Brooks (not to be confused with the famed British theater director) in which Brooks provides a Freudian analysis of Shelley’s novel. Winnet’s essay challenges the notion of narrative mirroring male orgasm (with the rising action, climax, and closure) in favor of the female experience, which is much more nuanced and varied, Kemson said. Until we recognize sexuality in narratives, Winnett suggests, “we only get half of the story.”

Kempson never thought she could write plays until she actually wrote one, in 1997, six years after she took her first playwriting class. She performed piece in 1999, and realized, “This is what I want to do.”

Mostly, she wrote plays for herself, and she defied the police cops of narrative structure, permitting herself, instead, to “focus on the details.” There’s a bit of chaos theory in her work, of turbulence. “I can’t always set it down in a linear equation,” she said. “That’s where I live—that’s where the feminine part of the brain lives.” Kempson believes that focusing too much on structure actually is focusing on the most boring part of the play.