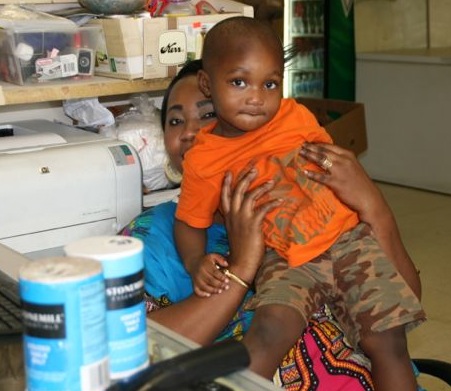 It's a family affair. Abigale Abbey and two-year old Martin work in the store owned by Abbey's brother Yaw Obiri who owns a second West African store in Northeast Minneapolis. (All photos by Stephanie Fox)

Tucked away in a little strip mall on the border of Richfield and Minneapolis is a small African market with a large ‘Obama 2012’ poster in the front window. Adom African Market stocks food for the local community of West Africans who traveled 6,000 miles to make new lives in the Twin Cities, but who still want a taste of home.

Behind the front counter and in charge of the store is Abigale Abbey, holding her handsome 2-year old son, Martin in her lap and wearing a bright African style dress and a gold chain supporting a large gold cross. She came from Ghana 13 years ago, living first in New York City, then following her brother, who owns the store, to Minneapolis. She proudly points to her hometown, Accra, on a large wall map. Behind the counter a loud and raucous Christian religious service streams across the computer.

“This place is perfect,” she says of her new hometown. “Everything here is going OK.”

Many of the store’s West African ingredients are starches, unexpectedly mild with a surprising number of corn-based products. One is the corn husk-wrapped kenkey, ready to heat and eat, an impulse item temptingly positioned near the cash register. Think tamales. 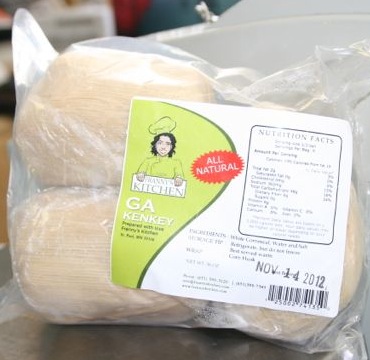 Also at the cash register is a West African version of snack chips called chin-chin. Made in St. Paul, chin-chin comes in two flavors, slightly sweet and slightly salty. They are surprisingly addictive. Next to the chin-chin are donuts – dense balls of fried, sort-of-sweet dough. Abbey wouldn’t tell me the African name for it. “Everybody has their own language in Ghana,” she said. “There are 42 languages. Each region has its own language. Everyone calls these something different. Just call them donuts.”

“You guys are lucky,” she added. “Here, everybody speaks English.”

Small geographic differences can also determine what foods end up on the family table. A food popular in one area may be met with scorn a few miles down the road. 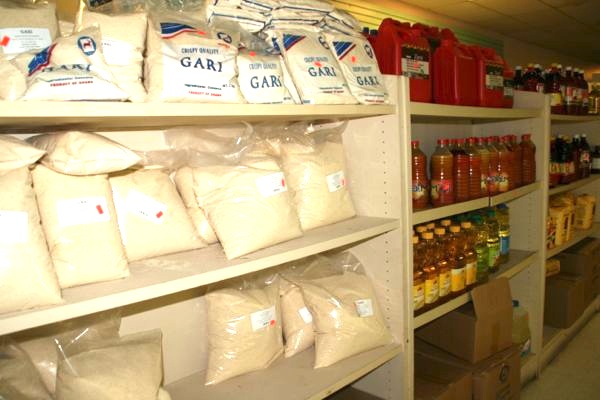 Packages of Gari – flour made from cassava (aka yucca), a tropical plant root also used to make tapioca. The flour can be used to make gluten free bread.

One intriguing and apparently universal ingredient is egusi, a starch made from ground squash seed. Since apparently everyone in West Africa knows how to cook with egusi, there were no directions on the packages on how to proceed. I asked Abbey what to do with egusi.

“Cook the spinach in water,” Abbey told me, “and then add the egusi. Lower the heat and stir it and cook it until it looks like scrambled eggs.” This seemed simple enough.

I didn’t have spinach, but I picked a mess of Swiss chard from my garden and boiled it up in a big spaghetti pot. I added the egusi, lowered the heat to medium and let it boil away.

After a half an hour, there was nothing that looked like scrambled eggs. It was my own fault. I used too much water or perhaps, too little egusi. I let the mixture boil for another 20 minutes before it seemed was done. It did look a lot like scrambled eggs.

The result was good, but not exciting. Abbey had assumed that I knew, as does any good cook, that the egusi soup can include onions, meat or dried fish, lots of palm oil, curry powder, garlic, maybe even a scotch bonnet pepper. Next time, I’ll know better.

So beloved is this food that even a question about its nutritional value sparks spirited debate on West African internet forums. However good for you (or not) everyone should try it, at least once. 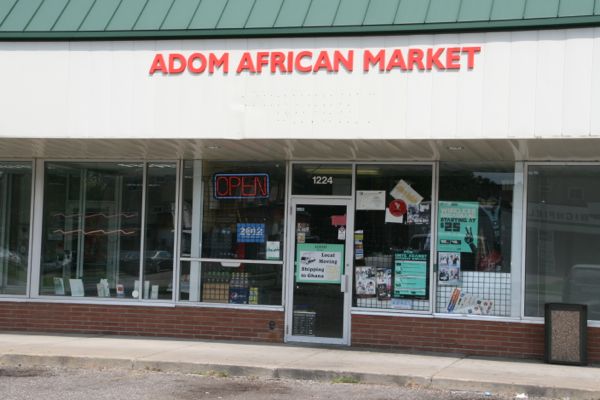