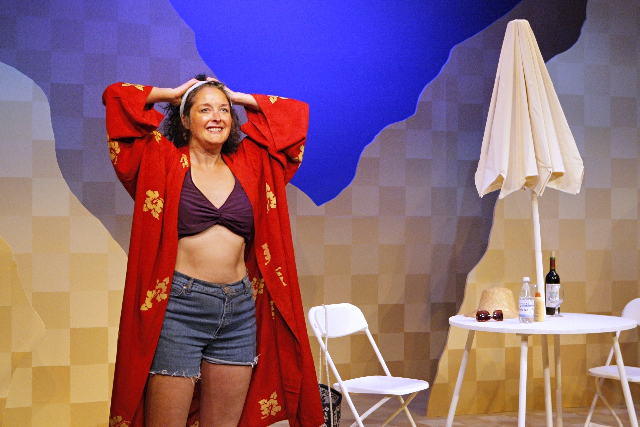 There’s absolutely nothing wrong with Shirley Valentine. The script by Willy Russell holds up remarkably well for being over 20 years old. The character of Shirley is charming and funny, and Cheryl Willis’ performance is equally winning. If you’re looking for an evening of theater that goes down easily and leaves you with a happy feeling, Shirley Valentine at the Jungle Theater is a perfect fit for you.

Even the most jaded theatergoer would have a hard time not rooting for Shirley Valentine. She’s self-aware enough to know that she could stand to get a little more out of life, but she’s also got enough of a sense of humor about her lot in life that she doesn’t spend a lot of time whining and moaning about it. Shirley has made her peace with her existence, and it’s only when a friend offers a fully paid trip to Greece for two weeks that Shirley gets jolted out of her routine. Shirley spends the first scene of the play enumerating all the reasons she simply can’t go. Then she spends the second scene of the play packed and ready to head out the door, if she just doesn’t lose her nerve. The program gives this away right up front so it’s not a spoiler to say that Shirley does indeed make it to Greece. The question, of course, is what does she find there, and how will her life change, for good or ill, due to the change of scenery?

Russell’s script lives in that comfortable vein of You Can’t Take It With You/It’s a Wonderful Life sort of storytelling, where a sense of humor and an openness to a different way of seeing and living your life is a saving grace. Sure, Shirley drinks a little, and is fascinated by the newfound awareness of the clitoris in modern society, but that’s about as edgy as the script gets. The script isn’t called Shirley Bradshaw, her married name, but Shirley Valentine, the young woman she once was. Shirley’s challenge is to get back to the person she used to be, one more willing to take risks to live her life fully. She states at the start that she planned to leave her husband after the kids were grown, but when the day arrived, she couldn’t think of anywhere to go. The play Shirley Valentine is about Shirley figuring out there’s a whole world of places she could go, if only she let herself.

It’s not perfect. This is mostly the script’s doing. Shirley spends a fair amount of time literally talking to the wall (“Isn’t that right, Wall?”) and later to a rock on the beach in Greece. (The rock can’t talk back to her, because it doesn’t understand English. Apparently, the people dealing with tourists, but not the rocks, are bilingual.) It’s a device that gets old fast. Also, if Shirley mentioned one more time how tough her life was at 42, I’d have been tempted to slap her. Oh, your husband has a job that pays well enough for you to stay home and drink wine all day. Boo hoo. Tell it to a person living in a refrigerator box, or someone stationed in Afghanistan. A sense of proportion, please.

The thing that saves Shirley Valentine from being completely self-indulgent is that Shirley is smart enough to understand her place in the world. Yes, she is the center of her own personal story, but that doesn’t mean the rest of the world is required to kiss her butt and make sure all her wishes come true. Other people have lives, other people have wishes. Everyone is the center of their own story. No one else is required to play along with you, unless it suits them. At the same time Shirley finally understands that she’s not born to always play second fiddle to the needs of her husband and children, that awareness includes an understanding that no one else is required to put her needs above their own. Shirley makes her own escape, and others are welcome to come along for the ride.

The combination of Bain Boelke’s direction (and vibrant set design in a bright pink frame), Russell’s script, and Willis’ performance is almost effortless enough to make you forget just how hard it is to do what they’re doing. One-person shows can be deadly dull. The writer has to have a gift for shaping a story, and the actor and director need to have a gift for telling it in an engaging and varied way. Plus, the actor in particular has no safety net, no fellow actors to pitch in and help out if the thread of the script gets lost. If the actor in a one-person show messes up on their lines, they’re screwed. It takes a certain kind of bravery (or foolishness) to tackle a task like that. Everyone associated with this Jungle production throws themselves into the task with all they’ve got.

Is Shirley Valentine life-altering? No, but I don’t think it means to be. Life-affirming? Certainly. It’s good to be reminded every now and again not to let your life slip by you without savoring it. Some of us need a reminder more than others. For all those folks, it’s a good thing Shirley Valentine is out there. After all, Shirley isn’t just talking to the wall, she’s talking to all of us, in the audience. The question behind the play is always: Why is she telling us this story, and why now? After we’ve heard Shirley’s story, what are we going to do about it?