But socially, a teenage girl has to confront all of that while battling hormones. And watching as those insecurities potentially turn them into the butt of everyone’s jokes.

What’s self-esteem if you don’t have a clear face? Why is everything so hyper-sexualized? How can you stand to be alone when everyone seems to be dabbling in dating already?

This is what set Ethelind Kaba to start Stargirl Initiative, a community outreach group that strives to build self-esteem in young girls.

Kaba—a South Minneapolis mother of three, including two daughters—said that while parents can try to give their kids the best family experience, the outside world influences how young girls feel about themselves. Female images on television and in magazines, especially, are beyond her control.

“I started thinking, ‘How can I create this community where girls are … not really bothered by what’s happening or what the media wants them to do?’ So they don’t think, ‘Oh, I want to wear these super tight leggings because everyone else is wearing them,’” Kaba said.

“Like, how would you define what’s beauty for you?” 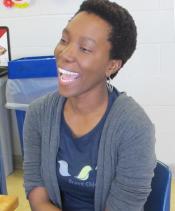 Right: Ethelind Kaba is trying to do her part for young girls by promoting positive self-image and self-worth through her newly constructed Stargirl Initiative. (Photo by ThreeSixty staff)

Kaba grew up without electricity, let alone a TV, in Ghana. The “it takes a village” mentality guided her childhood, one mostly spent outdoors.

If she would act up while outside the home, Kaba said other adults would “whoop me before even consulting with my mother. They just took responsibility for every person in the community.”

“One of my daughter’s friends was sending text messages that I thought (contained) inappropriate language, and I called the mother. But I’m afraid to say, ‘Hey, maybe you shouldn’t do that’ to the girl. There’s not a sense of community, at least not the way I was raised (in). It’s very individualistic.”

Kaba needed support, but she couldn’t find it from any existing groups in the Twin Cities. Since most are geared toward at-risk teens, Kaba reached out to Dana Suttles, a youth facilitator at Amicus, to brainstorm about Stargirl—which is named after the book “Stargirl” by Jerry Spinelli.

Suttles said she believes that girls aren’t confident enough because they lack representation. The standard of beauty is twisted by showing only a “few types of women.”

“The media doesn’t really show a lot of diversity either,” Suttles said.

Kaba is testing the waters, so to start she gathered several of her 13-year-old daughter Yayra’s friends on a recent Saturday morning at Pearl Park Community Center in Minneapolis. The small group discussed what made them feel powerful and comforted. They wrote about what they wanted to become.

While gathered in a circle around two life-sized outlines of human bodies, they filled its interior with words like “confidence” and “beauty.” They also wrote in smaller type the words they struggle with—among them, “insignificant” and “ugly.”

Another activity involved the girls picking female role models they identified with, including Lakshmi (the Hindu goddess of prosperity), Maat (the Egyptian goddess of truth) and rapper Lauryn Hill. The meeting ended with yoga to promote a positive body image.

“Sometimes I feel insecure about myself, but I try to overcome that,” Yayra said after the meeting. “And I want to feel powerful about myself.”

“At this age, all girls talk about is boys, boys and boys,” Nguyen said. “When I talk to some boys and ask them what the most important thing to them is, they’ll say sports or academics. So they’re actually shooting for something. They have a different focus.”

One of Kaba’s guiding themes to the Stargirl group is that “you have to find your own beauty.”

For instance, when Yayra had a difficult phase where she wanted to grow her hair out and straighten it, Kaba stressed that she should embrace her uniqueness. Yayra eventually settled on being comfortable with her own hairstyle as a young African-American, and even expressed an interest in cutting it.

The goal, Kaba said, is to focus on those conversations through monthly workshops that engage young girls. Or as one Stargirl sign at the meeting said: Let them “experience the power of being a girl.”

“Human beings, we tend to be very reactionary. ‘Hey, here’s a problem.’ But this is more, ‘Hey, let’s try to prevent it,’” Kaba said.