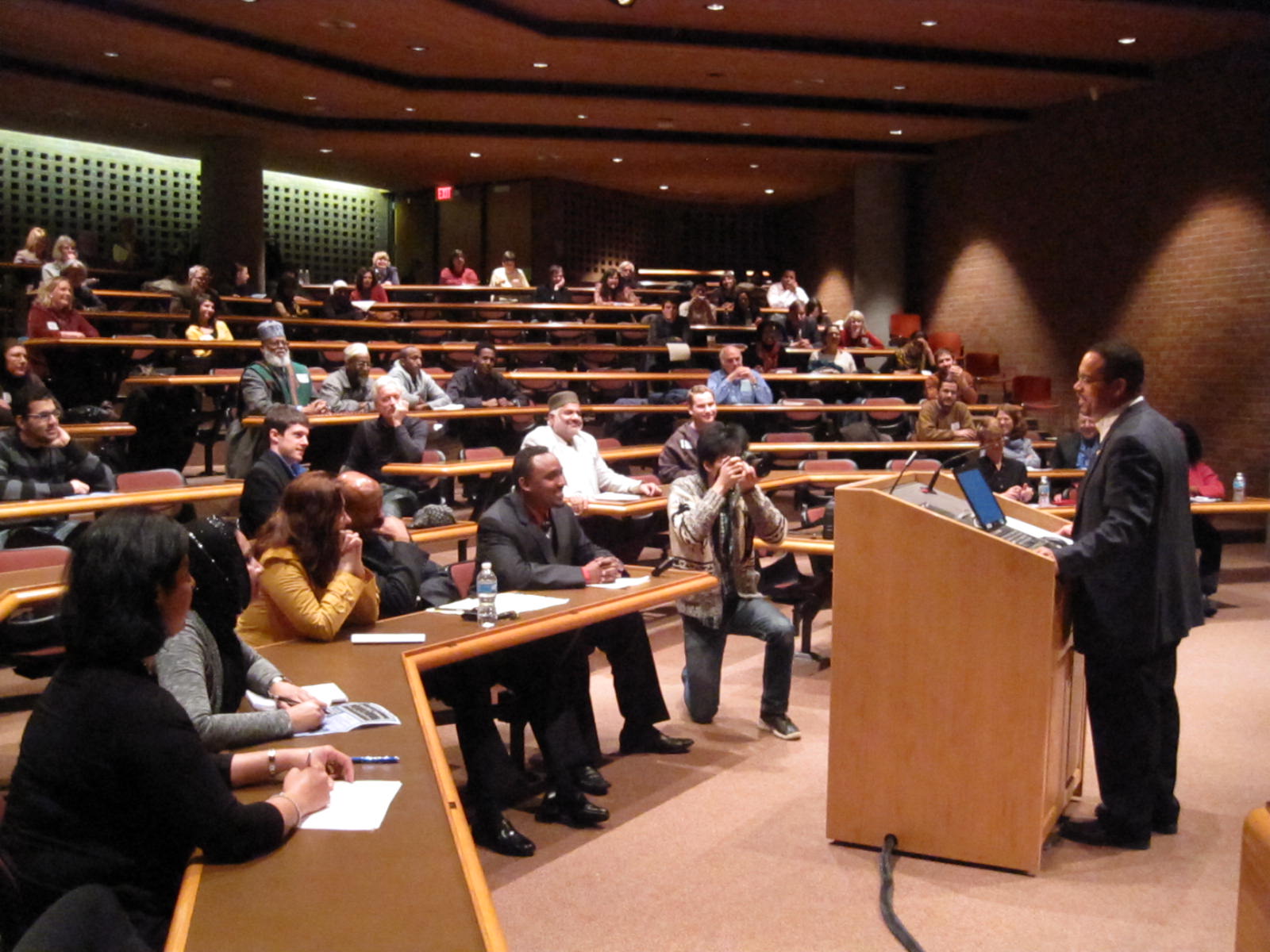 At the opening ceremonies for the University of Minnesota’s new think tank on Islamic law and Human Rights, Congressmember Keith Ellison described a time when he was a young boy afraid of what lurked underneath his bed when the lights were off.  One day his mother turned on the lights and told him to look underneath the bed and said, “There’s nothing under there but some toys you lost a long time ago,” Ellison recalled.  Similarly, the fear, hysteria and misinformation have circulated worldwide about the topic of Islam.  “We find ourselves afraid of something we don’t know anything about,” Ellison said.

Combating that hysteria, fear and misinformation is one of the prime goals of the Islamic Law and Human Rights Program, which will focus on topics and controversies involving Islamic law, human rights, terrorism and the Muslim world.  The program will incorporate publications, research, fieldwork and public seminars in its public outreach, according to a press release.

The kick-off event for the Islamic Law and Human Rights program on February 4 included remarks by a number of scholars, Ellison, Executive African Development Center director Hussein Samatar, and fellows of the program.

Professor David Wippman, Dean of the University of Minnesota Law School, said the Islamic Law and Human Rights program will look at questions of the compatibility of Islamic law and human rights, and examine topics such as property rights, the position of women, and crime.  The program will address what the traditions are in a “dispassionate, informed way,” he said.  Already, there have been reactions to the forming of the program, Wippman said, and not all those reactions have been favorable. He said he is looking forward to the fruits of the program’s research, which will benefit to the school, the university community, and the nation at large.

Abdulwahid Qanlinle, the Director of the Islamic Law and Human Rights Program, said the tension between Islamic law and human rights is not dissimilar to that experienced by other faiths.  For example, other faiths struggle with human rights as it relates to homosexuality or abortion.

Outeiba Merhebi, an Islamic Law and Human Rights Program Fellow as well as a Fulbright Humphrey Fellow, said that last semester she took a class on Islamic law because,  “I thought it would be easy for me.”  However, taking the class made her realize that the subject would become a major part of her professional interest.

Merhebi, who is from Lebanon and is herself Muslim, said she is aware of how Islamic law is interpreted differently in different regions of the world.  “Every country has a different Islamic law,” she said.  “In my research, Islam doesn’t oppress women…  the only reason women don’t have equal rights is not because of Islam but because of incorrect interpretation of Islamic law.”  Merhebi said she hopes to bridge the gap between the true teaching of Islam and its interpretations.

Hussein Samatar, who is a Minneapolis school board member and director of the African Development Center, said that he hopes the program will examine the vast diversity of Islam itself.  There is much diversity of thought and culture within Islam- it is not static within modernity, he said.  “How do we address these identities? Do we go back to the Koran?”  The challenge, he said will be to see if Islam can survive in a multicultural society.  “What does being Muslim in America really mean?” he asked.   “Can Islam protect human rights?”  While he doesn’t have the answers to his questions, Samatar hopes the program would be a place for research, debate and discussion.

Congress member Keith Ellison said he was proud that his alma mater was starting the program, and that it will be “shining light on a subject that has been in darkness and misinformation.”