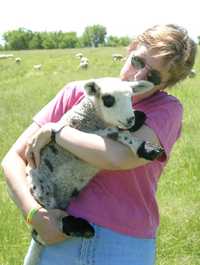 It’s a dream many of us have indulged in at some point during an idle moment when the hustle, bustle and toil of urban living seems too much: moving to the country to start a farm. We envision a place where life is simple, the sun shines daily on emerald green pastures and where all the animals are cute and cuddly. For anyone seriously considering making that dream a reality, Catherine Friend has some friendly advice: Don’t. Really. Just don’t do it.

The author of the humorous new memoir, Hit by a Farm: How I Learned to Stop Worrying and Love the Barn, [Marlowe & Company, 2006] knows of what she speaks. In the mid-1990s the city-dwelling writer of children’s picture books followed that dream—actually, her partner Melissa’s dream—to a 53-acre slice of vacant farmland in southern Minnesota. Together, with the blind optimism of newbies, they set about looking for something to farm. They settled on sheep.

With little more than familial connections to farm life, a few books and a weekend course in sheep sex, the pair plunged into what is now a decade-long odyssey with sheep, goats, llamas, ducks, chickens and geese. Farming tested their brains, their backs, their commitment to each other and pushed them to the very limits of their tolerance for gross.

“Farms have fences,” Friend writes in the opening paragraph. “People have boundaries. Mine began crumbling the day I knelt behind a male sheep, reached between his legs and squeezed his testicles.”

But grabbing a sheep by the balls was just the beginning. Life on the farm brought difficult births, difficult deaths, diseases, mud, rain, cold, hard work and bone-crushing exhaustion, almost all of which Friend finds a way to make funny, hilarious even. We can laugh because it’s not happening to us safe and dry in our living-room armchairs.

But, just like life, the farm also returned moments of joy—new lambs, cuddly baby ducks, and a fulfilling sense of productivity for Friend—both as a farmer and as a writer.

Even so, after a decade as a part-time farmer, part-time writer, she speaks of farm life in measured tones.

“I have come to appreciate the farm,” she said in a recent phone interview. “I don’t regret the farm. The farm has helped me find my writing voice. Just in the process of writing down the ridiculous things that were happening to us, that’s when I started to experiment with humor. And I had never really done that before.

It’s a voice that seems to resonate with a wide audience.

“When the book came out I wasn’t sure who it was going to be for,” she admitted. “And I’m getting feedback from farmers who have struggled but just never told anybody. …from people who grew up on farms, from the sort of armchair farmers who would like to some day move out to the country; city people who have no interest in farms. It’s been just all over the board, which surprises me.” She’s even had readers stop mid-book to email their appreciation.

These days, Friend and her partner of 23 years have settled into something like a routine, or as much routine as the farm will allow. Both women work other jobs, the economics of farming making it nearly impossible to survive on farm income alone. They take turns with chores, and Friend has carved out space to write. She has a new children’s book coming out next spring, followed by an adult novel, and a nonfiction work headed for publication in 2007.

Despite all that, what does Friend tell readers who say they, too, want to start a farm?