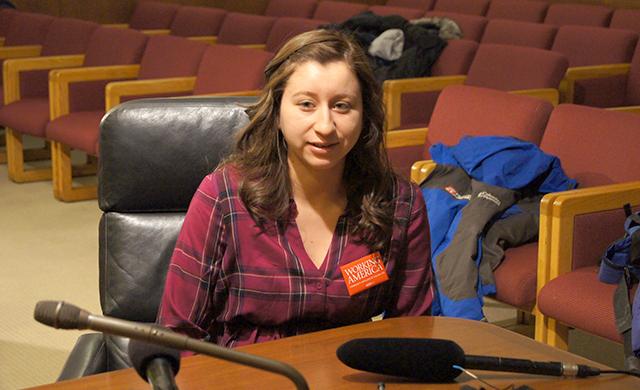 Judith Nunez testifying at a recent public meeting at the Capitol regarding raising the minimum wage. (MinnPost photo by Joe Kimball)

Until recently, Judith Nunez had a full-time job making pretty decent money and had no experience — or even interest — in political activity.

“I wasn’t into politics,” she said. “And with a full-time job, I didn’t really have time for it.”

But when the 23-year-old South St. Paul resident lost her $17-an-hour job as co-manager of a clothing store, her outlook changed.

She’s working two part-time jobs these days, making about $8.40 an hour at each, and finding it harder to make ends meet. So when a friend who’d been working with supporters of a statewide minimum wage increase asked if she’d like to help, Nunez said yes.

She found herself at a legislative forum last month with several liberal lawmakers who were promoting a bill to raise the minimum wage to $9.50 an hour. As part of their effort, the DFL legislators had been conducting a Minimum Wage Challenge, which meant they’d spent a week learning what it was like to buy food and find an apartment and a ride to work while earning $7.25 an hour.

After the challenge, the legislators held a public meeting with Nunez and three other low-wage earners, comparing their experimental experiences with poverty to the real thing.

Some results of the Challenge:

Rep. John Lesch of St. Paul, who’s a prosecutor in addition to his legislative duties (and pay), talked about grocery shopping on a $35-a-week food budget: two eggs and one cup of Froot Loops for breakfast, a peanut-butter and jelly sandwich and Ramen noodles for lunch, and often repeating the lunch course for dinner. He did fit in a couple dinners with a Tostino’s Pizza. “Now keep in mind, this is for one person,” he said.

Rep. Karen Clark said she looked for a place to live in her South Minneapolis district that would be affordable on the $375 a month that the Challenge allowed for housing: She found a room in a tiny house that she’d have to share with three others.

Nunez says she appreciates their efforts.

“I definitely feel that they are working to do the right thing, and I understand that they have many other things they need to deal with that are more important,” she said. “I’m grateful for the time they put into it, and that they even gave it a try.”

But she notes: “If they’d have gone a little longer [with living on little] they’d have an even better understanding of the minimum wage. It’s very tough having to make it last until the next paycheck.”

Even with her old $17-an-hour management job, Nunez says that she wasn’t getting rich, but that it was enough to afford a car and pay all the bills and maybe have a little left over each month. She lost that job after what she says was a dispute over the way employees were treated.

Since then she’s applied for other management jobs, but without success, and for now is stocking shelves at a Mall of America store and working as a clerk at a hardware store in West St. Paul. She gets about 40 hours a week, between the two.

She remembers when she was a boss:

“I became good friends with the girls I worked with, and saw how they struggled with a low-wage job. I tried to help them advance in the company and give them more hours, so they weren’t coming in for just three or four hours a day.

“Now I’m in the same position.”

Nunez is pregnant now with her first child, and couldn’t afford to buy a car when her other one was totaled. So if she can’t get someone to drive her to Bloomington for that job, she takes a 90-minute bus ride. The bus to the hardware store takes only 15 minutes.

Because she has a roommate, she pays $390 a month in rent and tries to keep her grocery bill to $200 a month.

Although it appears that the minimum wage legislation may be stalled for the time being, Nunez said she’s glad she made the effort to be heard and to tell her story.

“It was definitely a good experience,” she said. “I know the outcome is up in the air, and it’s definitely going to take time and negotiations, and many more discussions to make sure people understand the problem.”

Does she have plans to take part in other political activities?

“I don’t have any other events scheduled, but if anything comes up, I’ll try to go,” she said.