“Ben and I have been together 13 years, but have only acted in five shows together. [Through Tempests] we get to actually see each other work, and be creative together, teaching each other what we need,” Noë said, and Ben chimed in “and not be sick of each other.” Between day jobs and separate acting gigs, they say they otherwise don’t see each other at all. (Photos by Margo Ashmore)

It’s their wedding anniversary on the last day of the Fringe Festival, so they’re hoping their play will earn an encore. Ben and Noë Tallen, who live near Lucy Craft Laney school, are applying much more than hope to make it happen, and are rehearsing their show, Tempests, almost every night.

They’re just one of several North Minneapolis theater households with work in the Minnesota Fringe Festival, Aug. 4-14, one of the largest collections of new theater in the world going on at venues concentrated on the West Bank, in Uptown and Downtown. The Tallens’ company is called Tedious Brief.

Ben Tallen, Aaron Greer and Brian Watson Jones produced Bard Fiction in 2009. It involved more than a dozen cast members (Tempests has 16), quite a large undertaking for a play that also has to clock in at less than 60 minutes. Noë joins this year as director.

“The mashup seems to be a big deal,” she said. “A combination of what we remember as a kid combined with something more modern.” (And, this critic adds, the successful shows are funny or meaningful on their own without a person having seen either of the blended shows.)

Tempests mashes Aliens with Shakespeare’s The Tempest and all dialog is in the iambic pentameter of olde. Miranda (played by Kate Willer) returns to an island that has been overrun by fairies led by Ariel, the alien queen (played by Jane Froiland), and meets Caliban who was “baddish,” Ben says, in The Tempest but has now turned pious. They’re surrounded by military marines who’ve gone to see why they’ve lost contact with the humans on the island.

They use three different dance conventions and need more rehearsal space than The Warren (44th Avenue North and Osseo Road) can handle. “We practiced Bard Fiction there,” Noë said, but have outgrown it, and are rehearsing in a South Minneapolis church where Theatre Unbound also practices.

The Tallens remarked that North Minneapolis, where they’ve lived for eight years, is becoming home to a growing artistic/theater community. “It’s a good place to find a first house,” affordable.

Mike Fotis, who has a show in the Fringe, lives a few blocks away from them, and they listed off a handful of others, crediting Duane Atter of the Warren for keeping them all connected.

Noë works a lot with Theatre Unbound. Ben has acted and produced “all around town,” since he was six years old, and though their dreams are to “make a living off what we’re passionate about,” Noë said, “only a select few” can do that. Their day jobs are in IT and paperwork processing. “We couldn’t survive in the day jobs without this outlet.”

Noë said the Fringe provides a structure that would be extremely hard to duplicate, allowing the artist to develop both the show itself and their own marketing savvy. With 168 shows competing in 15 venues throughout the 10-day marathon, not only do the companies hope to make enough at the box office to pay their actors, but the most attended show in each venue wins the prized 11th day encore.

“We did a Kickstarter, and wrote appeal letters to people we know,” Ben said. Kickstarter is a website where project ideas can be posted, and people pledge money. Only if the goal is reached, is the money collected. “A couple of people from other states” gave based on seeing their trailer. Ben explained that a filmmaker friend filmed for two days in their garage and at another location to make an action-packed professional-quality film trailer accessible at the Kickstarter.com website.

“You’ve got to have a way to stand out from the crowd,” he said. They learned a lot about other kinds of marketing while doing Bard Fiction, “like sending news releases to local newspapers.”

The Fringe Festival does not “jury” the shows that sign up, though many more are proposed than get in. It’s a lottery system. “I love that it’s random. It’s so cool that people are coming from all over because they’ve heard the Minnesota Fringe is (the place to be),” Ben said. There are Fringe Festivals all over the world that give theater companies a place to start, or to try new things. Noë said in the last four to five years many Fringe shows have been remounted, fixing what didn’t work, refining, or enlarging.

“The number one way to see the Fringe is to ask the people in line next to you, what’s good. They WILL tell you what they think. There’s an excitement in the audience members, energy, revving to go see” several plays in one evening, the Tallens said. For the extremely devoted, there are bulk passes that reduce the individual play costs dramatically.

“Did you feel it? (nods yes) “You have to have the same intention (as in the fight scene) in the first half.”

“Those wonderful hissing sounds you make, can you make them between words so we can actually hear her?” and the actress said “I’ll actually pronounce consonants” and that’ll help.

Another actor filled in the blank when Noë shook her head over an illegible note. “Are you saying you couldn’t hear me? I’ll work on enunciating.” Noë: “Yeah, that’s probably it,” and others nod their heads.

“How the hell does she know there’s a blanket in there?” Ben Tallen (center, below) asked, leading to a discussion that eventually got the prop dropped from the play. 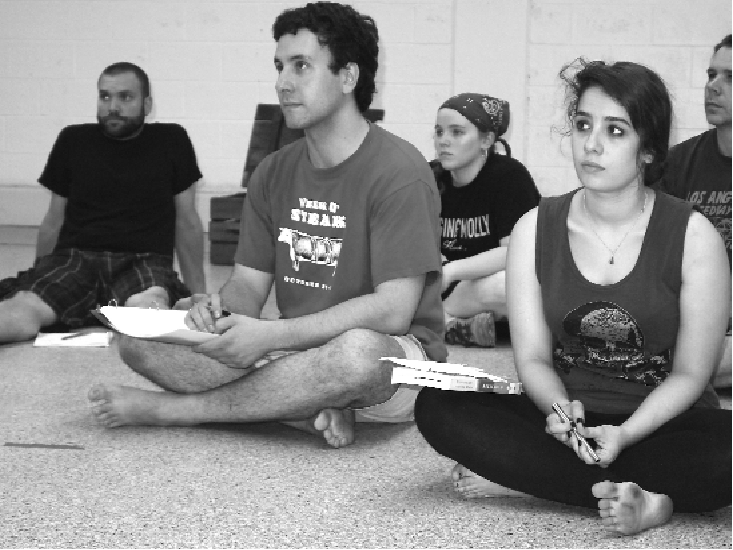