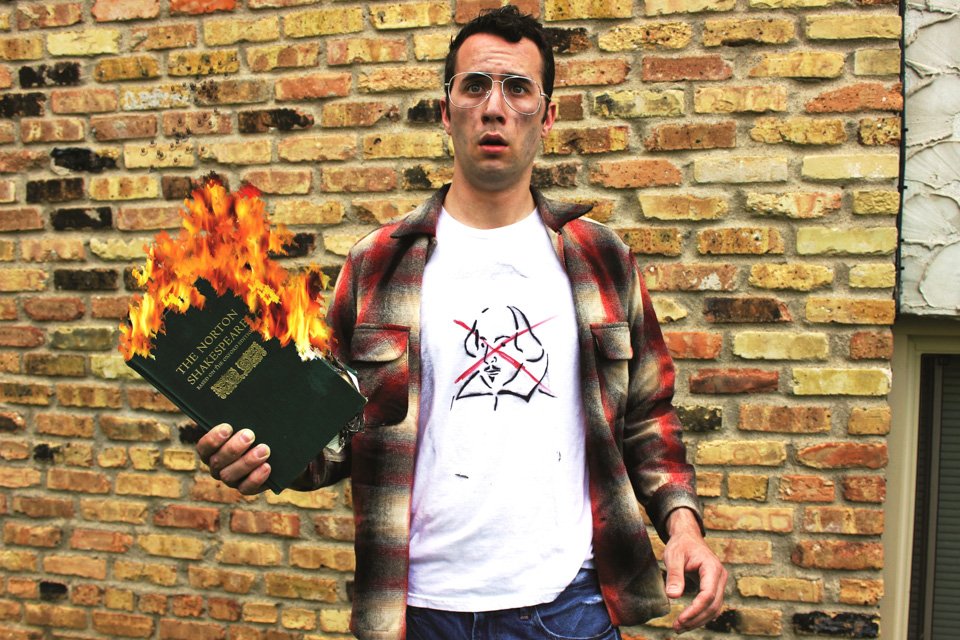 There is a continuous battle fought by actors and high schoolers alike—understanding Shakespeare. Except for the mighty few who are either geniuses or lying, it is quite hard for most of the population to comprehend the 400 year old words of Shakespeare’s literature. Shakespeare Apocalypse, performing at Theatre In The Round, exposes many of the issues modern generations have with Shakespeare’s writing and provides a glimpse of what would happen if we decided to stop reading Shakespeare – an apocalypse, obviously. The story begins with Peter, a starving young actor (naturally), and Amy performing Hamlet when Peter forgets his next line. He then begins improvising. Then improvising turns into a big rant against Shakespeare. This is all filmed by teen vlogger Tracy, who puts it on the internet and the video goes viral. Soon people all over the world are burning Shakespeare’s work and proclaiming #downwiththebard! In a turn of Freudian proportions, Shakespeare, Jane Austen, and Ernest Hemingway come back, having sold their souls to the devil for literary immortality, to destroy the world. Peter and Amy must save the world. With twists and turns at every corner, Shakespeare Apocalypse does not follow the normal path of apocalypse stories at all, making it truly original and innovative.

This absolutely hilarious musical, written by Keith Hovis, is filled with clever pop culture references, as well as tons of sneaky musical theater references. Some are more obvious, like beginning a song with “Something has changed within me, something is not the same,” and some are more subtle for the real nerds in the audience. The jokes are well written and even more appropriately placed, but, many of the best are not heard because the performers do not wait for laughter to end to say their next line. For example, one of the best lines in the show is when Shakespeare is dying and he says “tell my wife I’m sorry I stole all her plays!” but no one can hear it because Adam Rousar, who plays Shakespeare, doesn’t wait for the audience to stop laughing. It really only becomes a big problem when important plot points are missed leaving people who are busy laughing, or who have a hard time hearing, lost.

The music of Shakespeare Apocalypse, also written by Keith Hovis, is nothing extraordinary, but is made better with amazing performers. The songs sung by Peter (Philip C. Matthews) and Amy (Jill Iverson) are entertaining and hilarious because of the quality of their voices and performances. Philip C. Matthews, although singing a score that is slightly too low for him, has wonderful comedic timing and energy and can belt his face off. Jill Iverson is a standout and by far the best part about Shakespeare Apocalypse. Every time she opens her mouth, a beautiful, powerful voices comes out, blowing everyone else out of the water. Most of the other songs are less impressive as the vocal quality goes down, but performances quality does not, which makes the songs still bearable.

The one thing missing from Shakespeare Apocalypse is that it’s not long enough. The show is so fun and entertaining that when the hour is up, you won’t want it to be over. Nevertheless, to miss up on the opportunity to see a clever take on an apocalypse story with brilliant performances and hilarious writing would be crazy. Just make sure to listen carefully, or you might get lost in all the laughter.

There is one more chance to see Shakespeare Apocalypse at Theatre in the Round Sunday, August 10 – 2:30 pm. Visit www.fringefestival.org for more information.