Photos from the Phillips lab, by Stephanie Fox

Before the turn of the 21st Century, vodka drinkers looked almost exclusively to Europe when shopping for high-end vodkas. Then, eight years ago, bucolic Benson, Minnesota, with a population just over 3,000 people, became the center of an epicurean vodka revolution.

Shakers Vodka and the birth of Minnesota’s vodka empire

One of Benson’s major industries is the Chippewa Valley Ethanol Company (CVEC), a co-op of 975 farmers, most living within 50 miles of the plant. From the grain these farmers grow, the company produces 46 million gallons of ethanol—mostly for E-85 gasoline and industrial use. But while their slogan is “Better Fuels for a Better Life,” a sign in front of the company’s main building reads, “Home of Shakers Vodka.”

In 2003, CVEC was approached by a group of entrepreneurs who had created Pete’s Wicked Ale. The group had sold Pete’s for $69 million (as of March 1, the Pete’s Wicked Ale brand is now entirely defunct), and with start-up money in hand, they wanted to make the first high-end American vodka. The new vodka’s marketing vibe was the elegant 1920s, and the frosted bottles were shaped like Martini shakers. The new vodka was named Shakers and the company was based in Blaine.

Mike Smith, Shakers’s VP of sales, who said he’d been with Pete’s Wicked Ale and Shakers since its first days, explained that the Benson plant was chosen because it was just above the 45th parallel—halfway between the equator and the North Pole, an area known to grow superior grain. “That’s where the glaciers came down and left mineral-rich soil,” Smith said. “Most American-made vodka is made with the cheapest grain bought on the open market. What they typically buy is #2 yellow corn, milo and sorghum. We though other grains would taste better.”

“We have 48 farmers farming wheat and rye fields within miles of Benson,” said Smith. “Farmers grow to our specs with lower protein content.”

CVEC’s ethanol comes to Blaine at 192 proof, is cut with water and then filtered though birch, peat and coconut shells. “Our process is extractive distillation,” said Smith, “which keeps the taste of the grain but filters out the bad stuff. The vodka picks up different tastes and it takes off the roughness. We feel that our ingredients are far superior and we own the process from ground to bottle. We think it’s the best vodka in the world.”

Shakers’s distiller, Pat Couteaux, is one of only three Americans to have a master of fermentation from the University of Munich. “Most have master blenders and he’s a master distiller,” said Smith. “He’s our mad French scientist.”

In less than three months from its introduction, Shakers was the number one selling vodka in Minnesota and quickly expanded to 19 other states. Vodka connoisseurs loved it. It received a 100 perfect score from Wine Enthusiast Magazine, the highest score ever for a vodka. “I especially like the rye,” said Guy Grad, a manager at South Lyndale Liquors. “It’s got more character, more grip and a better mouth feel.”

But within a couple of years, problems began to emerge. The price of more than $30 for a bottle was too much for most vodka drinkers, especially after the recession hit. Some liquor store owners complained that the distribution was spotty and that sometimes Shakers was hard to get. It was hard to find in a lot of bars, too, where many people experiment with new brands. “It was really flakey. We had trouble getting it for the store,” said Grad. “That sort of thing makes us look bad.” As this article goes to press, the brand’s website is down as well.

The artisan vodka movement Shakers hoped to create the same way the craft American wine and beer industries were fashioned 20 and 30 years ago may have been too successful. Although Shakers had started the trend, more than 200 other American vodka companies were soon on the market, all claiming to make an superior product. “Midwest grown” became a bragging phrase in the vodka wars; often, that meant a CVEC-made base ingredient. Connecticut-based Moon Mountain and NYC-based, Minnesota-bottled Crop Organic were two of these. Another was Prairie Organic Vodka.

Prairie Organic is made by Ed Phillips & Sons, a distributing company founded in 1912 by an immigrant from Minsk and still based in Northeast Minneapolis. The company got into the liquor-making business soon after the end of Prohibition and was the first American company to sell flavored spirits when, in 1937, a salesman reported that drinkers were adding peppermint candy to their alcohol to make it more palatable. The result was the perennially popular Peppermint Schnapps.

Company president Dean Phillips (above), great-grandson of the founder, was also the first to distribute posh European vodkas such as Belvedere and Chopin in Minnesota; he realized that there was opportunity in home-grown luxury vodkas. Prairie Organic was launched in 2008, and unlike many of his competitors, Phillips had the marketing power to make Prairie a success.

Instead of wheat or rye, Prairie Organic used certified organic and kosher #2 yellow corn, grown on three family farms. “We can trace a bottle of our vodka to the very field in which it was grown,” said Phillips.

Like Shakers, the critics loved Prairie Organic Vodka. It was named Best New Vodka by Food and Wine Magazine in 2009 and was winner of a Double Gold Medal at the 2008 San Francisco World Spirits Competition. Phillips emphasized the ecological aspects of his products. “The left over biomass waste—the corn cobs—are used as fuel to run the stills,” he said. “Even the glass bottles are made with recycled glass and packed in cardboard made from sustainable wood pulp.”

UV, Phillips’s internationally distributed line of sweet flavored vodkas also originates at CVEC and is priced at around $10 compared to Prairie’s $25 price tag. Aimed at a younger partying crowd, it currently comes in 10 flavors like cherry, apple, sweet green tea, and lemonade, with more on the way. The newest flavor, expected in early June, is called Cake and tastes like a slice of yellow cake with white frosting. 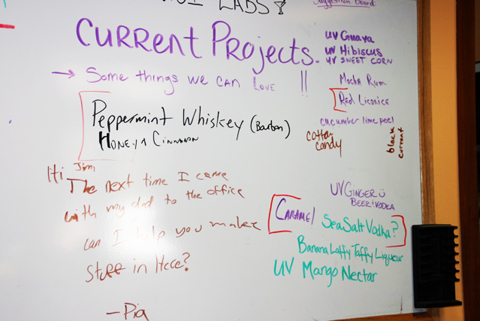 The vodka wars rage on

Ben Le, a manager Lake Wine & Spirits, pointed out the limited shelf space his store has given the once-trendy Shakers. “It’s been in and out of the market a few times,” he said. “The price used to be too high for regular consumers. I think they’re coming back. Shakers is doing a little better, but it’ll depend on the marketing and how aggressive they get. I think they need to rebrand.”

“We sell a lot of Prairie, though,” said Le. “Here in Uptown, the organic labels do better.”

Shakers, which Smith says once owned 30 percent of Minnesota’s high-end vodka category, still has a loyal following and the company is working to increase its customer base. They lowered the price of the standard 750 ml container to a little more than $20 and switched to a cheaper clear (rather than frosted) bottle that better reflects Shakers new mid-range marketing category.

Shakers’s Facebook page is still by far the most popular American vodka page with nearly 100,000 fans, as well as hundreds of fans on 20 additional state fan pages (plus Antarctica). Prairie Organic’s page has fewer than 3,000 fans.

While Shakers’s Facebook page announced that “2011 is our coming-out party across the nation. You, our fans, helped the brand grow in 2010 and we want to make 2011 our best year yet,” Smith said that Shakers is considering downsizing the geographic marketing and promotions to seven or eight states. “We’ll put all our dollars in Minnesota, Iowa, Wisconsin—the Midwest,” he said.

While the vodka wars continue, the little ethanol plant on the prairie continues to grow. Its food grade division, Glacial Grain Spirits, provides their alcohol in drum, truckload, and rail-car quantities. “We’re happy with our growth,” said a CVEC spokeswoman who wouldn’t release exact figures or provide her name. “We’re seeing a lot of new companies come here. It’s always happening. We’re always getting phone calls inquiring about our product.”