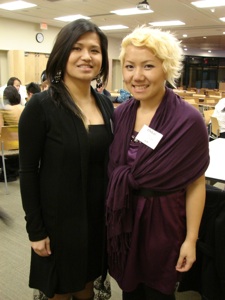 Oskar Ly, vice chair, welcomed guests and said SOY is excited to hold its first fundraiser and now has a full board of directors to help guide the organization outreach and work they do in the social justice area.

“This means a lot to us and we don’t take this for granted for a single day at all,” said Ly.

Linda Her gave a keynote address, which was her own coming out story as a Hmong lesbian growing up in the Twin Cities and the difficulties of coming out. She said that to become the confident person she is today was a long challenge

The reaction of her family and community was to hear from them that there are no same-sex people in the Hmong culture. She said it was difficult to feel alone that nobody understands you.

As a college student she left to be with a partner in San Francisco in 2003. She found the environment very supportive but felt a part of her was missing by not being with her queer and Hmong community and her family.

“I just didn’t feel at peace without the relationships with my family and just struggled with all that,” she said.

Her was worried about coming back but today she said her life has changed for the better as an artist, activist and writer who works on social justice issues. She said that in 2003 she could not have imagined there would be a Hmong queer fundraiser filled with hundreds of supporters from all areas of the Asian and mainstream communities.

“I am just so happy that we are taken for real and looked at as important and that the next generation of Hmong people that want to come out or discover something about themselves and not pretend to be something else – a sad and depressing fate.”

Kevin Xiong, executive director, talked about the SOY history. He said it started in 2003 when Phia Xiong and Xeng Lor wanted to create a social gathering place for Hmong LGBTQ. They wanted people to be able to talk about their lives together and have a place to meet where they feel safe and welcome. This spread into activities from picnics, volleyball and potluck dinners.

In 2006 the organization formalized with Hmong American Partnership as a fiscal agent. In 2008 SOY started work on attracting more women to the organization. In 2009, Xiong was hired as the first SOY Executive Director, which allowed them to apply to create programs and apply for grants.

This past summer they conducted interviews with members and held board retreats to create a new mission: To support a community of empowered Hmong LGBTQ to create positive cultural and social changes that enhance their lives and communities.

The SOY vision is to educate a community that is aware, supportive, and engaged in Hmong LGBTQ issues.

To talk about the need for SOY, Xiong reflected on his own experience. He came out in 2002 and having been close with his mother, he said she did not talk to him for a year. She finally asked him to explain what LGBTQ is and it led to her telling a story she her from her grandmother. As a youth she was told the story of a boy who was “acting a little flamboyant”, who was then abandoned in the forest.

“A very good friend of mine, Yube Castillo, came up to me one day and said, ‘Kevin, SOY is that forest’,” said Xiong.