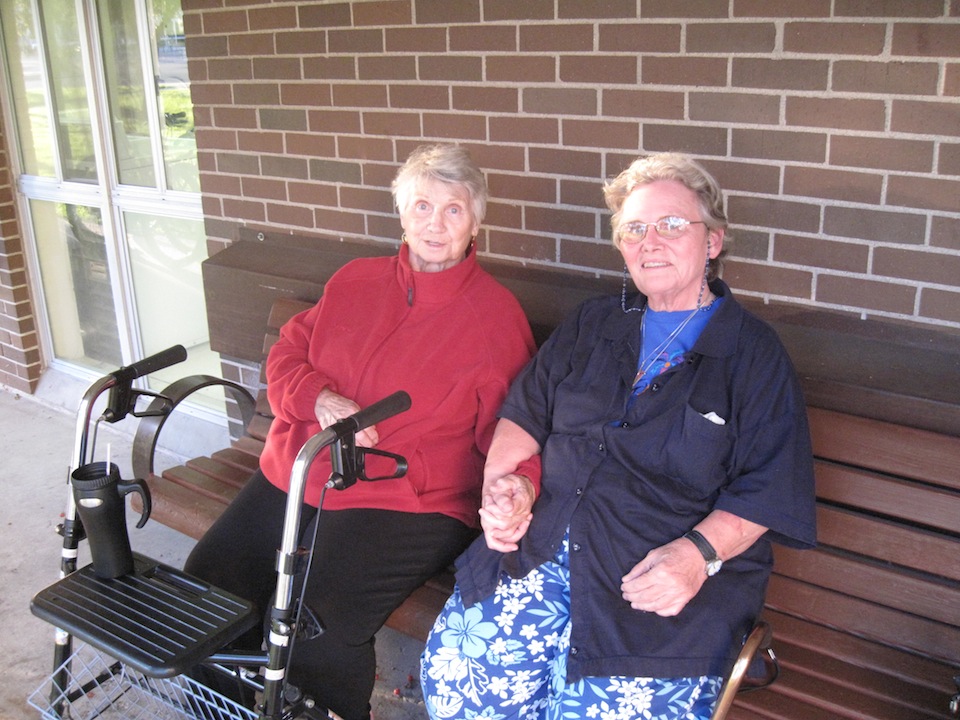 Grace (Dotty) Larsen and Karen J. Gano relax on the bench outside of Seward Towers East

If you’ve ever driven down Franklin Avenue or Riverside Avenue just south of Interstate 94, you’ve probably noticed two high-rise towers that, at 21 stories high, are a landmark of the neighborhood.  Seward Towers East and West, originally called Bor-Son Towers, were built in 1969 and 1970 and for forty years have provided affordable housing for Minneapolis residents.  While the population has changed over time, from a mixed population made up students, seniors, and others to the current make-up of mainly African immigrants, the Towers have offered a clean place to live in Seward’s richly diverse neighborhood.

Jim Gabler (TCDP Associate Editor Jay Gabler’s father) moved into the Towers the year they opened, when he got back from serving in the Navy. “I loved it,” he said of his time there, which was about a year.  “It was wonderful.  It was such a good combination of young people and old people.  I thought it was one of the best situations that I’d ever been in.”

When Gabler lived in the Towers, they were run under a different subsidy program than today, with the rents the same for different sized units.  There was one threshold income, which applied to anyone who wanted to live there.  “What it did do was it created quite a bit of economic integration,” he said.

Later Gabler became the manager of the multifamily division of the Minneapolis Community Development Agency (now CPED), where he worked from 1986-1995.  At that time, the affordable housing requirement dictated by the federal funding that originally went into financing the Towers  was about to expire, as was the requirement for affordable housing in Riverside Plaza.  (The Towers then comprised about 10% of the affordable housing in Minneapolis).  The owner of the Towers, Tony Bernardi, who owned a lot of different developments including the Skyline Towers near Hamline and 94 in St. Paul, was thinking about converting Seward Towers into market rate housing.  “The city didn’t want that to happen,” Gabler said.

Today Seward Towers East has 320 units, 207 of which are Section 8, and the majority of which have one bedroom, according to a report provided by Ayan H. Ibrahim, property manager for CommonBond.  The report states that 425 people live in Seward Towers East, of whom 244 are women.  There are 375 Africans and/or African Americans, 50 white people, two Native Americans, two people of Hispanic heritage, and two people of Asian heritage.  The average income is $10,468.72.  There are 82 people ages 0-17, 257 people age 18-61, and 86 people over the age of 62.

Seward Towers West also has 320 units, of which 318 are Section 8 housing.  The demographics in the west towers show a slightly higher African/African American population (399) and a slightly lower average income ($10,255.96).  There are also slightly less people over 65 who live in Seward Towers West (78) and more young people under 17 (102).

Karen J. Gano has lived in the Towers since before it was taken over by CommonBond. She had moved to Minneapolis in 1983 to escape an abusive marriage in Emmetsberg, Iowa, where she is from, and after working at the IDS center for several years, was laid off and “had a nervous breakdown.”  After spending some time in the hospital she joined a journal group, where she found out about the Towers.  She said she moved in “on a beautiful autumn day when the trees were golden” in 1987.  It took her a while, but eventually she put pictures on the wall and called the place home.  While living in Seward Towers East, Gano attended classes at Minneapolis Community College (now Minneapolis Community and Technical College)  where she got an A.S. degree in Human Services, and later got a B.A. at Metro State.

Gano said she loves living at the Towers, where she has gotten help from social workers and also taken computer classes. She said that, while she was one of the few young people living in the Towers when she first moved in, now “it’s like living in a little United Nations.”

The Advantage Center, which serves both Towers, offers programming ranging from youth programs, job help programs, and programs for seniors.

Fadumo Ibrahim, who has lived in Seward Towers East for more than 11 years, got help from the Advantage Center’s job program and found work doing janitorial work, which she continued for five years until she had to stop because of her allergies.  She has lived in a few affordable housing facilities since moving to Minneapolis from Somalia in 1986, but she said Seward Towers is the best, because it’s a clean, safe place to live.  She said she also enjoys the diversity of the Towers.  “I talk to people whatever country,” she said.  “We are all friends.”

According to CommonBond Communities, 83 percent of the youth living in the Towers (about 55 young people)  participate in the youth programs, including the Homework Center (a weekly drop-in homework help for school age students) and Study Buddies (a weekly one on one mentoring program).

Carol Lewis, a resident at Seward Towers East for 14 years, said that her son Isaac began using the Study Buddies program when he was a junior.  “I cannot tell you what a blessing it was,” she said.  “They just connected,” Lewis said of Isaac’s mentor, Dan, who was a graduate at the University of Minnesota, “They still keep in touch,” now that her son has gone on to college.  “I appreciate it so much to have mentors and have help where you live,” she said.

Lewis has also been active in the residents council and was formerly on the board of the Seward Neighborhood Group.  “There was a time when I knew every tenant in this building,” she said.

There are also 36 individuals registered for computer classes, according to CommonBond.  The Advantage Centers also has received funding to work with the Healthy Housing, Healthy Communities program which focuses on environments that foster healthy weight, lower tobacco use, and less exposure to second hand smoke.

Adrienne Hyde lives in the Towers and has worked in the Advantage Center since it opened ten years ago.  “There’s been a lot of changes,” she said, “It’s all designed around what the residents want and need.”  English classes and employment, she said, are the greatest needs right now, as well as help with paperwork, especially for the immigrant community.  She said of the programs at the Advantage Center:  “We have a lot of things that can benefit people besides just an apartment.”  Hyde runs a garden at the Towers, but she tries to keep her work life and living separate “so I don’t have people at my door wanting things.”

Seward Towers is just a fantastic place to live, says 82-year-old Bill Kindem, who moved into the Towers nine years ago with his wife, who has since passed away.  When they moved in, they “didn’t need welfare,” Kindem said, but were told if they invested their money in a low risk insurance company, they would qualify, since qualification was based on income.  Kindem said he loves living at Seward Towers East. “Everybody is polite,” he said.  “It’s a peaceful quiet building to live in for $250 a month.”