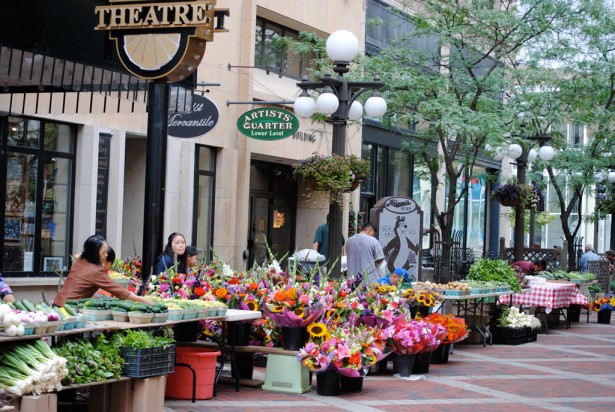 Downtown Saint Paul is rarely accused of being exotic. But hidden right in its midst is a thriving, bustling microcosm of the great wide world. I’m talking about Seventh Place.

Only one block long, Seventh Place is Saint Paul’s answer to European pedestrian-only city centers. From the golden entry archway facing St. Peter Street to the frequent bustle of the Wabasha pedestrian crossing, the patterned brick underfoot lifts its denizens out of the workaday world and transports them to an old city square in Nordic Europe, or on days when the farmers’ market is in session, to Southeast Asia.

Even on nonmarket days, the Place offers a panoply of diversions. During Winter Carnival, the Great Waters brew pub puts out an elegant ice throne (I’ve heard that drinks are free if you down them while seated there, but I’ve never seen anyone brave it), and some years they feature a complete ice bar and side tables with chairs.

In warm weather, your mood can’t help but rise as the laughter and conversation from the dueling patios of Great Waters and Wild Tymes draws you down the street, past the stone slab of the Hamm’s Bear monument (even just glancing at it sets the tones of “From the land of sky blue waters” running through my head), to savor the always offbeat displays in the front window of the Artist Mercantile. You walk past the playbills for Park Square Theatre (during spring lunchtimes, swarms of middle schoolers pour onto the brickwork), the huddled smokers in the alley, the pigeon feeders slumped on wooden benches tending to their “pets.” The music of buskers accompanies you along the way-the Dylan devotee, the blues harp player, occasional students from McNally Smith College of Music-while the smell of baking bread wafts from Jimmy John’s and Bruegger’s Bagels. Finally, you pass the hot dog man, with his oldies station blaring and his beach umbrella spread wide above his wares.

Near the Wabasha end of Seventh Place, a perplexing mural decorates the side of Walgreens, showing central Saint Paul landmarks-but all out of place, as if the city planners had decided to scramble their toys and try out a new configuration. Gone are signs for a recording studio that never quite happened (for months, that sign was enough to inspire excitement at what might be coming next), and a mythical art supply store that was created for the Arnold Schwarzenegger vehicle Jingle All the Way.

But there’s nothing like those Thursday (and sometimes Tuesday) farmers’ markets, when the whole street is ablaze with color-some from the enticing flower stall (which always seems to do a thriving business), and most from the tempting, delicious-looking displays of local vegetables. (Is that really food? It looks like art.) Most of the vendors are Hmong American, their stalls operated by family members of all ages. It’s a communal scene, one I’ve seen many times in the Hmong homelands (and elsewhere) in Southeast Asia. The old grandmother resting in the shade, the toddler content to wave an asparagus stalk in the air, the teenagers who’ve made sure they’re styling right even during work hours, and, under it all, the industriousness and tight-knit sense of family that so characterizes Hmong culture. I don’t always need vegetables, but my spirit never fails to be lifted by strolling past the displays, immersing myself in a vibrant, clustered community life that draws Saint Paulites of every age and background together, even if only for the length of a city block.

Though I tend to scoff at the conceit, I must admit that the sign above the defunct Palace Theatre advertising a long-closed Brave New Workshop show still says it well: “Minnesota, It’s Not Just For Lutherans Anymore.”

Daniel Gabriel’s new short story collection, Tales From The Tinker’s Dam, has nothing to do with Saint Paul. Though he has worked for COMPAS for over 20 years-both as roster artist and as director for the Arts Education and Arts in Health Care programs-he denies any conflict of interest.