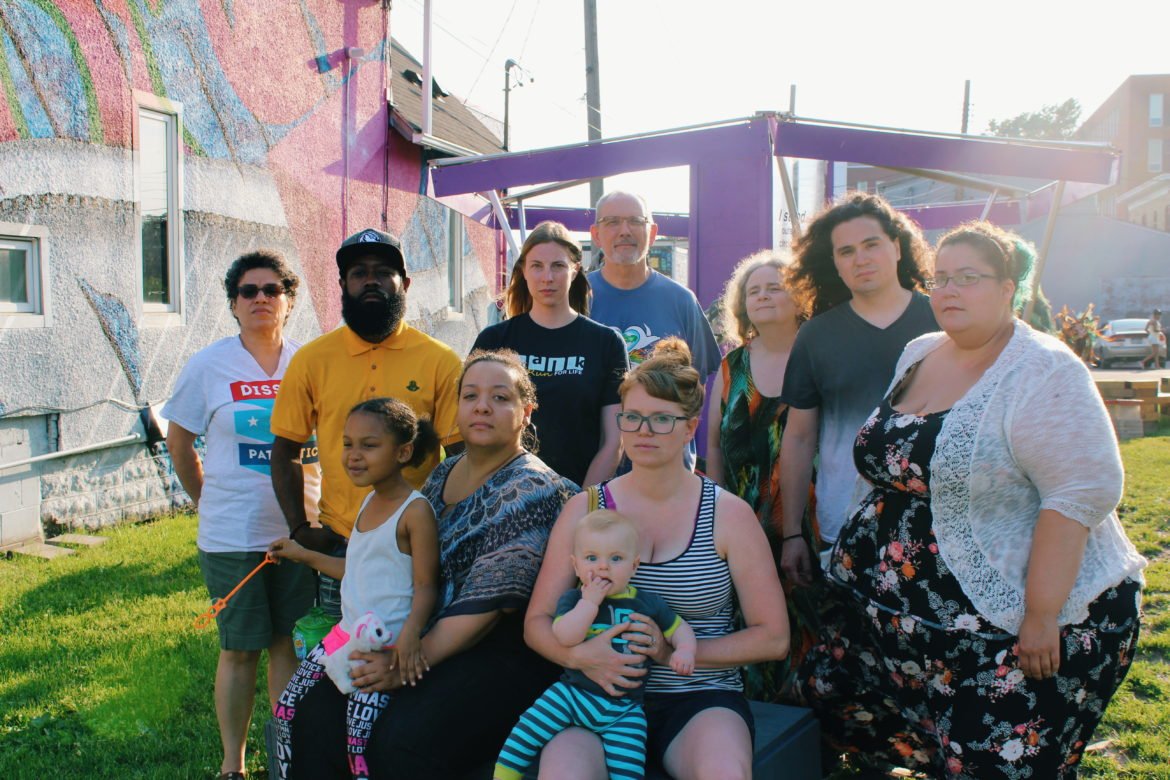 “We are still out here dying. My son still has asthma. That thing is still in our backyard,” said Felicia Perry, a fashion designer, activist, mother and North Minneapolis resident.

It’s a sentiment that could have been said by any other resident on the Northside. Perry, along with her colleague and fellow activist Roxxanne O’Brien, live in the Northside’s 55411 and 55412 zip codes, an area with a population of over 70,000 people – of whom more than 70 percent are people of color. The community is home to more than a dozen schools, parks and a growing business corridor, as well as the unwelcome industrial polluter Northern Metal Recycling, situated just off of Broadway Avenue on the west side of Interstate 94.

The company has a near decade-long track record of permit violations, illegal emissions and confirmed high rates of lead and other heavy metal pollution. For years, residents such as Perry and O’Brien door-knocked, spoke at public meetings and wrote letters until the Minnesota Pollution Control Agency (MPCA) conducted a 2015 study confirming the community hazards that residents already knew: that the area has the highest amount of asthma hospitalizations in the state and sky-high cancer rates, with the finger pointing directly at industrial polluters, especially Northern Metal Recycling.

The 2015 study became the impetus for court litigation against the company and in 2016, negotiations seemed to be moving in the right direction when a judge ordered a partial shutdown of Northern Metal, sending the company into negotiations.

“By that time, the company had changed their legal representation, some staffing and then wanted to talk about a settlement,” said Sarah Kilgriff, manager of the MPCA’s land and air compliance section.

But as negotiations played out, the final settlement contained none of the recommendations community members made. In addition, the settlement goes entirely to government entities, continuing to leave the residents most harmed – most of whom are low-income and people of color – without justice.

According to the settlement, Northern Metal will remain in operation at its current location on the Northside – albeit with quarterly air quality monitoring – until summer of 2019.

Northern Metal will also pay $2.5 million, which will go toward:

Xcel Energy and Northern Metal signed an agreement to relocate the recycling plant to Becker, just outside of St. Cloud, where it will move near Xcel’s Sherburne County generating station. 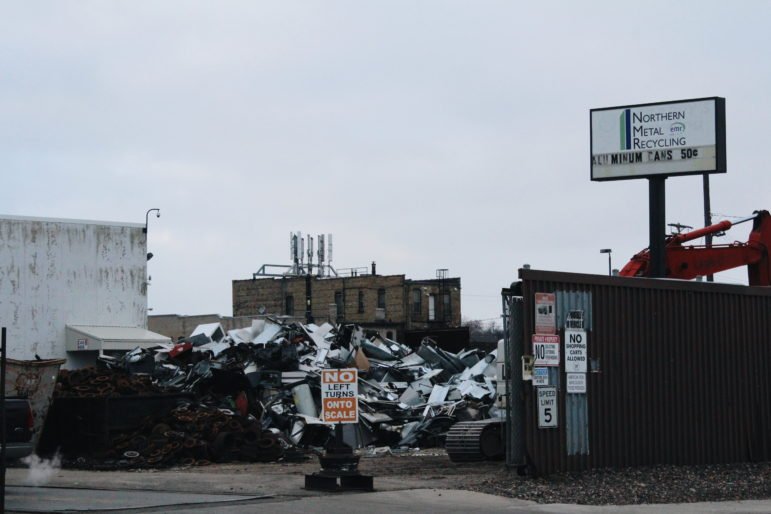 “We didn’t want this settlement.” Perry said. “People who were a part of this decision, like the MPCA and the elected officials, went completely against the community desires, against all of us who have been fighting for environmental justice for years,” Perry said.

Roya Damsaz is a North Minneapolis resident and engineer that works a block away from Northern Metal Recycling.

“The fact that this settlement is coming so late, and that we have to settle with Northern Metal, just proves that the city and state did not pay attention while all this was happening. They allowed this disaster to happen. It is their fault that not only Northern Metals, but all the polluters in this area, were allowed to get to this point,” she said.

Community feedback for the settlement was distilled into only two listening sessions held in January. Both sessions were held on Wednesday evenings, preventing many residents with nontraditional work hours from attending. At the sessions, residents said they wanted health care access to those affected, an immediate shutdown of the plant, clean up and rezoning of the site to provide for greenery and public park spaces, and direct compensation for damages.

Despite the community voicing concerns, Kilgriff called the Northern Metal settlement a victory for citizens because the MPCA, with advocacy from the city, broke tradition from past environmental enforcement lawsuits by engaging public in conversation and asking them how the funds should be allocated.

“We were able to allocate some money in the settlement for community health projects only because the city came on board as a signer to the settlement,” Kilgriff explained. “Given all the factors in the case, we felt that this was a positive outcome because it guaranteed a move and it included some definite changes.”

In Minneapolis, the city’s $600,000 portion will go toward blood testing for lead as well as a new program that will deploy housing inspectors to rental properties where children with asthma live to find and reduce asthma triggers.

While such programs may be helpful, for residents they are not enough. The amount of heavy metal poisoning North Minneapolis residents have seen is causing asthma, learning disabilities and certain types of cancers. No amount of blood testing will reverse these effects or restore the damage that has been done to the community.

“This is a messed up way of making us participate for free in our own oppression. You know that settlement wasn’t right,” Perry said.  “The mental burden has been placed back on us for a problem that we didn’t create in the first place.”

O’Brien attributes much of the inequity around the Northern Metal settlement to bureaucrats and officials refusing to connect the dots between environmental racism, pollution and justice. “They are just so far removed from it all,” she explained.

“Pollution is out here killing more people than gun violence. They want to point the finger at us but never the system. We are exploited and under resourced,” O’Brien explained.

“Hawthorne has the highest foreclosure among residents. You have got to ask yourself, ‘are these people sick? Are they unable to go to work? Are they constantly going to the doctor? Can they not pay their mortgages or hospital bills so they’re losing their homes, losing their wealth? How is this all connected?’”

“This is what environmental racism looks like. What else could it be?” O’Brien said.

“At this point, it’s not really about just Northern Metals anymore, it’s about holding the entire system accountable for their historic disinvestment from and exploitation of our community and our land,” O’Brien said. “They try to chop it down to building industry, making money and creating good jobs.”

Even though the enforcement settlement with the MPCA is over, residents still have the option of forming a class action lawsuit to sue for personal damages.

In a statement, Ward 5 Council Member Blong Yang said that he supports the idea of residents getting together to form a class action lawsuit for damages. He also clarified the distinction between this particular enforcement lawsuit and other lawsuits that would garner more financial compensation for affected people.

“The suit by the MPCA was in regards to Northern Metal lying about their business. It was much more technical and not a class action personal injury suit,” he said in a statement.

According to Yang, the city of Minneapolis plans to use the funds from the settlement to focus on lead remediation and air quality improvement in the area.

“We hope that that does a lot of good,” Yang said.

Ward 5 Minneapolis City Council candidates Raeisha Williams and Jeremiah Ellison have both had their ears tuned to the Northern Metal negotiations, but both admitted that they would need to better familiarize themselves with how policy works around environmental justice issues.

“I don’t think this was an equitable settlement,“ said Williams. She said that she isn’t an environmental justice organizer, but if elected she would love to have the guidance of residents to learn more and make the right decisions.

“People should be able to live in an environment that is free of toxins, and everyone should have quality of life whether it’s economic, social justice, or environmental,” she said.

For Ellison, the effects of environmental racism and pollution have personally impacted his own life. Growing up as a kid on the Northside, he had activity-induced asthma and  had to use an inhaler.

“I respect all the hard work that they [elected officials and agencies] put in, but it’s not justice,” said Ellison. “I’m disappointed that Northern Metal will continue to operate. When you think about how many years [of pollution], does a couple hundred thousand dollars really do it justice? I think no, but I also want to honor the fact that I don’t know what that number is.”

In spite of the settlement’s outcome, the community has vowed to continue planning and strategizing around this issue. O’Brien herself has been working with the Center for Earth, Energy and Democracy (CEED), a Minneapolis-based organization that works in collaboration with grassroots communities, policy makers and researchers to help promote and develop just, equitable and sustainable energy and environmental policy.

Going forward, O’Brien said that the movement is in special need of legal and scientific minds that can lend a hand. She also is looking for community members who have asthma, cancer or lead concerns who might be willing to share their stories.

“We have residents who have all types of superpowers… creating flyers, sending emails, making phone calls, holding politicians accountable… everybody [can] pitch in somehow, someway. And that is the beauty of the struggle,” O’Brien said.