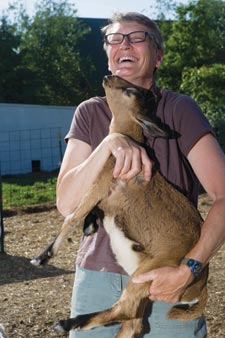 "Sometimes when I am weeding or driving the tractor, I am rolling a sermon around in my head."

Robin Raudabaugh is one of those few fortunate people who can look at her career and say she cannot imagine anything else she would rather do.

The fact that she has two careers may help her feel that way. Raudabaugh is bi-vocational, working as the operator and manager of the Nitty Gritty Dirt Farm in Harris and serving as the pastor for Pilgrims United Church of Christ in Maple Grove.

Raudabaugh grew up on a dairy farm outside Pine City, Minn., with one sister and five brothers.

“I always wanted to be a farmer, but my dad told me that girls could not be farmers,” she said. However her mother, an artist, supported her, often going with her to help her trim the hooves of her dairy cow.

She went on to the University of Minnesota, receiving her degree in agricultural education. She taught in that field, but also felt a call to the ministry and attended United Theological Seminary.

“My second year in seminary, I got divorced and came out as a lesbian,” Raudabaugh said. “Coming out was huge. My daughter was 10, and it was wrenching. That was a tough year.” Her son was 12 at the time.

While she was living in the seminary apartments in 1991, she bought 15 acres of farmland.

“We had been a visible back-to-earth farm family, and I was going crazy not having any land to grow in,” Raudabaugh said. “The first year I had my land I bought a shovel and dug a 12’x12′ garden. I planted trees and increased the gardens every year.”

Raudabaugh said she owned the land for six years before she built a house on it. “It was more a hobby farm,” she noted, “but I learned things. I raised sheep and chickens and a lot of perennial gardens.”

After serving in a variety of roles at a church in Robbinsdale for eight years and co-pastoring there for three years, Raudabaugh took a break and worked in a bakery in Grand Marais while the owner was on vacation. “I learned how to bake artisan bread, and I knew I wanted to do something in which I could bake bread as part of my daily life,” she remembered.

She and her partner, Gigi, began visiting Community Supported Agriculture (CSA) farms. Typically a farmer offers a certain number of shares to members, who pay an annual amount. It has become a popular way for consumers to buy local, seasonal food directly.

Raudabaugh started farming the land and offering shares in April 2004. Growing from 25 that first season, the shares have numbered more than 100 in the last few years.

The farm now has six full-time stipend interns, all women, and several volunteers.

Meanwhile, she has spent the past five years serving as pastor at Pilgrims United Church of Christ.

“Pilgrims called me as a bi-vocational minister,” Raudabaugh stated. “They celebrate the fact that I can be both a farmer and a minister. If I can’t get away from the farm for a meeting, we have a conference call. We plan ahead in case there is a Sunday I can’t make it, and we have a sermon in a box ready and a plan for the worship service to happen.”

“Sometimes when I am weeding or driving the tractor, I am rolling a sermon around in my head,” she reflected.

Raudabaugh said situations on her farm can be like those playing out in the gospel. She said that watching a chick die just before its egg cracks open can give her a new way of preaching about life and death at Easter time.

“Writing sermons about these concerns helps me make sense of the farm,” she noted. “And having my faith and church to temper my controlling about the farm helps me to be more mindful, looking for signs of wonder in every moment.”

She said her greatest accomplishment so far has been pulling it all together in a way that people and the institutions she respects honor and respect her work instead of wonder what it’s about.

“I recognize that farming and church are both about celebrating food,” she explained. “Breaking bread, sharing and celebrating community are ideas that are important to both.”

She said the farm, like the church, is all about rituals.

“I would like to bake bread, brew beer, make cheese, raise beef, garden and maybe pray seven times a day while I’m doing it,” Raudabaugh said with a chuckle. “I’m called to be a farmer-minister, not a farmer or minister.”