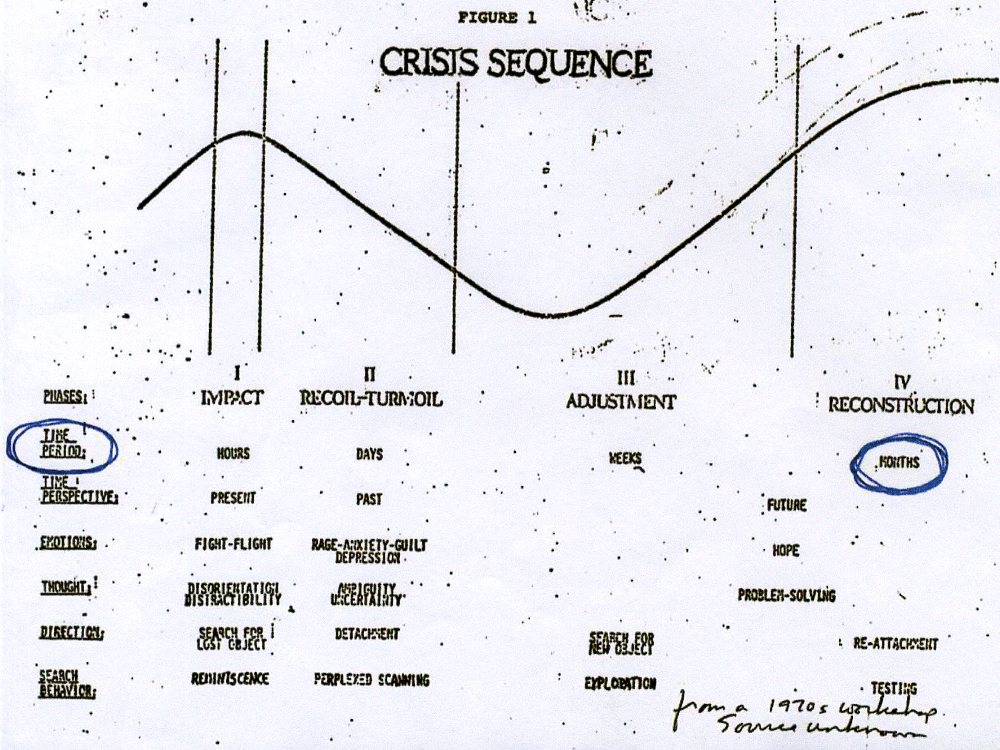 September 11, 2001, was a Tuesday, and by the next Sunday, September 16, the initial shock had largely worn off, though confusion reigned.

A good illustration of what was happening comes from a chart I’d seen many years earlier, where a normal Crisis Sequence for human beings had been explained, and I had kept the handout, which is above. This chart comes from the early 1970s, and I’ve preferred to keep it as I received it, then.

The words on the chart are probably difficult to impossible to read here, but the chart itself is straightforward and logical: normally, shock lasts a very short time; the normal person has moved on – gotten perspective – in a matter of months. The continuing hysteria surrounding 9-11-01 is abnormal behavior which has to be fueled and encouraged externally.

The essence of the ‘peaks and valleys of the illustration:
PHASE: Duration of Phase
IMPACT: Hours
RECOIL-TURMOIL: Days
ADJUSTMENT: Weeks
RECONSTRUCTION: Months

This posting is about what happened during the “Recoil-Turmoil” time: September 16, 2001, a Sunday, and September 20, a Thursday, in Minneapolis.

We went to 9:30 a.m. mass as usual at the Basilica of St. Mary in Minneapolis. The church was filled more than usual that day.

We had a visiting priest, Father Dandurand, for that mass, and I wrote about his homily (sermon) to family members. The relevant portion of my September 24, 2001, e-mail follows:

“The Sunday after September 11 [Sep. 16] our Priest was faced with the universal dilemma of his colleagues of every denomination, everywhere: what should I talk about? In the end, he briefly and very powerfully focused on the Gospel reading for the day (Luke 15: 11-32) on the Prodigal Son, his father, and his responsible – and very angry – brother. [The Priest] chose to focus on the angry brother, and on the absolute need to replace anger with forgiveness.”

The [next] Thursday, September 20, 2001, I had been to a regularly scheduled meeting of the Catholic Archdiocese Social Justice committee. Understandably, the agenda of that meeting changed to accomodate the need to talk about September 11. I had described that meeting in my letter, and continued “…At the aforementioned Social Justice meeting, one lady commented on the aftermaths of a conciliation message preached by her pastor. Three families quit the parish. And so it goes…goes…and goes….“

Today we remember nine years, and the hysteria is once again ginned up. The 1970s Crisis Sequence presentation laid out what we all know is true: regardless of the event, a normal person/society moves on, and it is a matter of months. The devastation of the Haiti earthquake happened only eight months ago, and Haiti has been off the radar screen of almost everyone for months already.

Fear and loathing are useful political tools, used to manipulate and control. They can only be effectively used with someone willing to be used.

After September 11, 2001, our society had a choice of two forks in the road: to reconcile, or to war. We all know the fateful choice and its consequences for us and everyone else.

Something else was happening in New York City on September 11, 2001.

As the first plane was about to hit the World Trade Center, a group of children and adults had gathered at the nearby United Nations building to celebrate the International Day of Peace, which then coincided with the opening of the General Assembly of the United Nations. As some children played music, the first plane hit the tower, and the program was cancelled.

As such things happen, this September 11 event also celebrated a singular accomplishment by a young Englishman who had successfully lobbied the United Nations over several years to standardize the International Day of Peace at September 21 of each year. You can read about him and what he accomplished here.

September 21, 2011, is a specific, symbolic day of peace. Whether by yourself or with others, participate in it now, and strive to make all 365 days of every year days of peace.