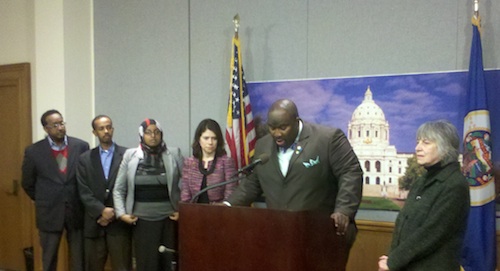 Four DFL legislators and a group of Somali community leaders spoke out at a State Capitol press conference April 16 in support of  HF 1902/SF 2159, a resolution urging a solution that would allow Somali-Minnesotans to send money to their families in Somalia and in refugee camps. Senator Jeff Hayden said that “there is no safety net” in Somalia. That is why the more than $100 million each year that Somali-Minnesotans send to families in the Horn of Africa is so important for survival. Inaction, Hayden said, “is causing people to die.”

“Certainly we need to ensure that money transferred from here to the Horn of Africa is not going into the wrong hands, but the solution is not to cut off this service altogether,” said Hayden.

“Somalia is in the throes of a terrible famine that is claiming the lives of thousands of people,” explained Representative Karen Clark. “This is not just an issue of fair policy, but one of a humanitarian effort. The situation is dire.”

Hashi Shafi, the executive director of the Somali Action Alliance, said money transfers are a lifeline for families, and “the only safe way to send money back home to Somalia and to refugee camps.”

Somali-owned MSBs operate in refugee camps, explained Hindia Ali, also of the Somali Action Alliance. She said many families have been internally displaced, by the civil war, and then relocated in remote areas. She emphasized that Somalia has no banking system at all. Moreover, she said, the country has no health insurance, so when someone must seek medical care, “they need money right away.”

Said Mali said he is a provider of money service business, and that there is currently no Minnesota bank that will cooperate in transferring funds to Somalia. He described dealings with a succession of banks, as U.S. Bank stopped MSB to Somalia in 2005, then Wells Fargo in 2006, then Bremer in 2007, then TCF  in 2008, and finally Franklin Sunrise Community Bank — the last Minnesota bank — in 2007.

Mali said MSBs are highly regulated, checked by the IRS and the State of Minnesota every year, and require all customers to produce identification. He said they have never had a problem, but that the banks simply said, “We cannot do this because of the U.S. government.” The issue is concern over federal regulations designed to stop funding for terrorists. According to Mali, they are now negotiating with U.S. Bank.

Sadik Warfa said that he sends $400 every month to his mother-in-law in Somalia, who supports five other family members. “She needs it to stay alive,” he said, asking that people “work with us so we can resolve this issue.” He noted that Somali-Minnesotans send more than $100 million each year to their families in the Horn of Africa.

Senators Jeff Hayden and Kari Dziedzic and Representatives Karen Clark and  Phyllis Kahn spoke in support of the resolution, and said Republicans in the Minnesota legislature have repeatedly refused to allow a hearing. They will hold a “People’s Hearing” on April 17 at 8:30 a.m. in Room 300N of the State Office Building.