State Sen. Bobby Joe Champion (DFL-59) recently hosted a town hall to update his constituents on happenings at the Capitol; and according to Champion and others, the picture is a lot rosier for North Minneapolis than in years past.

About 75 people turned out at the University of Minnesota’s Urban Research and Outreach Center (UROC), 2001 Plymouth Ave. N., to hear from Champion and others including State Sen. Jeff Hayden (DFL-62), the interim CEO of MNSure, Scott Leitz, Alex Tittle, equity director for the Minnesota Sports Facilities Authority, and others about happenings affecting the residents on the Northside. According to Champion and others, things are turning around for the area’s residents, as additional monies and services are making their way to the community that some critics say has been an afterthought on the state level. But much of the news shared at the two-hour meeting could have been for residents of any part of the state, as the presentations were more state specific than neighborhood based.

MNSure’s Leitz, speaking to the audience was as much about resurrecting the image of the health exchange as it was about providing information. Leitz took over as CEO when April Todd-Malmlov resigned in December amid harsh criticism that the exchange was being run poorly. To date, the exchange has signed up approximately 92,000 people, about two-thirds who were on either Minnesota Care or Medical Assistance. Leitz acknowledged the program’s shortcomings, but said things are back on track with the goal of making sure everyone has access to affordable healthcare. 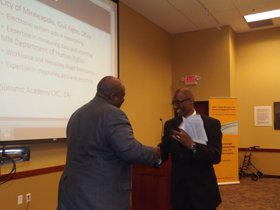 Left: Senators Jeff Hayden (left) and Bobby Joe Champion greet one another during a town hall meeting at the University of Minnesota’s Urban Research and Outreach-Engagement Center (UROC). The town hall was attended by close to 75 north Minneapolis residents.

“It hasn’t been the cleanest or easiest process to get into MNSure, but we’re getting much better,” said Leitz, noting that people who have signed up with the exchange have the lowest cost premiums in the nation. “We’re doing everything we can to meet the needs at the local level. We don’t want to just get people into health coverage, we want to improve the overall health of the community.”

The deadline for all Americans to have health coverage as mandated by the Affordable Care Act is March 31. 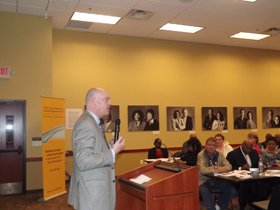 Right: Interim CEO of MNSure, Scott Leitz, addresses said despite the early hiccups, MNSure is on track and has signed up more than 92,000 for health coverage. (Photo credit: Harry Colbert, Jr.)

In a meeting of wide-ranging topics, Hayden, who is the Senate’s Deputy Majority Leader, discussed efforts to increase the state’s minimum wage. The current minimum wage in the state is $6.15 – a wage lower than the federal rate of $7.25. Bills in the House and Senate seek to increase the wage, but the two bodies differ on the amount. The House has passed a bill to up the rate to $9.50, while the Senate is proposing a more modest increase to $7.75.

“But let’s talk about the minimum wage as the floor and not the ceiling,” said Hayden. “We really should be striving for a living wage.”

One industry that is paying a living wage is that of construction and Tittle of the Minnesota Sports Facilities Authority (MSFA) – the entity behind the construction, maintenance and operations of the new home of the Vikings – said many of those jobs are going to African-Americans and other minorities. According to the MSFA equity director, 34 percent of the $975 million project’s workers are minority and 12 percent are women – both above stated goals. 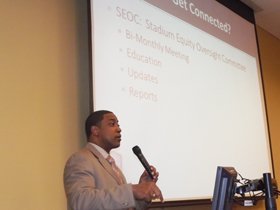 “Time and again we see projects like this and we see all this work going on and very few (African-Americans) on the site,” said Tittle, who said many of the workers are from north Minneapolis. “The construction industry is made up of white men who keep passing down this opportunity to their heirs. We’ve got to figure out how to infiltrate and sustain. I have a vested interest in the Northside. It’s my hope that the stadium works for the Northside as well.”

Tittle touted Thor Construction as one of the minority-owned firms contracted to work on the project.

“Who hires our people? We do,” said Tittle. “We have the best opportunity to hire us, so it was very important to get Thor on the project.”

Construction on the 65,000 seat multi-use stadium began in November and is expected to be complete by the start of the 2016 NFL season.

Other topics discussed at the town hall including housing, the Senate budget and criminal expungements.