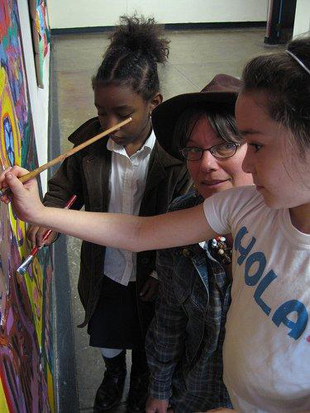 A South Minneapolis non-profit organization, SELF International, Inc., has teamed up with Sabathani Community Center and the Science Museum of Minnesota to create an event aimed at students who may not have had the opportunity to explore cutting edge science or to talk with scientists and science educators.

SELF International (Science, Education, Literacy, Fine Arts) began as a collaboration with a network of micro clinics in Ghana and a plan to use science education to lower the rate of infectious diseases in that country. But when funding for that project dried up, the local organization saw that there was a need in Minneapolis for science education to prepare the next generation for careers in science, engineering and technology. SELF’s long-term plan, said Executive Director Bonnie Everets, is to target interested students who might not otherwise have to chance to learn about science and to get them interested in science during their early years in school.

The organization’s first event, NanoDay, is scheduled for 1 p.m. to 5 p.m. Saturday, March 31, at Sabathani Community Center, located at 310 E. 38th St., and is part of a nationwide festival of NanoDays educational programs. The national event began in 2008 and has grown to include 200 events including this year’s NanoDay in Minneapolis. The event is free to everyone.

Minnesota, said Everets, has one of the biggest educational gaps between affluent and poorer students and she hopes that her organization can make a difference for lower-income students. “We want to eliminate that gap so there will be equal opportunity for these kids,” she said.

“I think many of these kids don’t see science as being part of their world,” Everets said. “They think it’s irrelevant or that it’s hard. We want to get younger kids involved so it will be natural to them. They’ll grow up with it. Science will be part of their world. Then, they’ll be able to fill the jobs of the future.”

The Science Museum has signed on as chief sponsor of NanoDays, supplying a NanoDays kit to Everets who, with Nanoscale Informal Science Education Network and other volunteers from the science and educational communities, will be planning the programs.

The Sabathani event will be geared for grade school and middle school aged children, offering opportunities for fun scientific activities. Students can go from station to station to talk with experts and teachers, and can explore science through hand-on nanoscience experiments. Interested students will be able to sign up for Sabathani’s after school science programs.

Nano, shorthand for the science of particles as small as a billionth of a meter, is already used in products like sunblock, cleaners, clothing, sports equipment and medicine. Nanoparticles act differently than the same elements do when they are larger. Hydrogen gas will ignite nanoparticles of platinum without a spark, something that wouldn’t happen with something the size of a platinum wedding ring. Nanoparticles of gold change color as the particles get smaller, even though the element itself remains the same. Nanoscience is still in the initial stages but the scientific, and the economic possibilities, are seemingly endless. It is the next big thing in science, said Everets, and will have as strong an impact on our culture as the automobile and the computer.

“Nanotechnology is so new that we’re all learning the risks and benefits together,” said Science Museum spokesperson Kim Ramsden. “We’re proud that we can introduce these ideas to the public. This is very exciting for us.”

State Senator Patricia Torres-Ray, who was instrumental in getting the Science Museum involved in the event, is a strong supporter. “Facilitating a partnership between the Science Museum and SELF International was an essential step to insure that SELF’s mission to increase and expand community access to science becomes a reality,” she said.

Among the presenters is Rajan Vatassery, a chemistry graduate student at the University of Minnesota and a science tutor for a group of students from East Africa. He will, he said, be putting together a demonstration showing how nanotechnology affects everyday life, which he hopes some of his students will attend. “This is not futuristic,” he said. “We have been using nano and will be using it for a long time to come. The end goal is to get kids interested. We want to show them what they’ll need to know to become a nanoscientist by demonstrating applications of nanoscience and how it affects their lives.”

Doug Shoemaker, vice chair of the Minnesota Renewable Energy Society (MRES), said his organization hopes to interest students in nanoscience by showing how new solar panels and solar water heaters have been made more efficient by nanotechnology. “We tell kids that these can be used in schools and homes,” he said. He also hopes to introduce some of the students in other science programs such as MRES’s Solar Boat Regatta, where students in the 7th through 12th grades can learn about solar electricity and fluid dynamics by building and racing their own solar powered boats.

Other participants in NanoDay include Carr Kpanyour, a teacher at the Friendship Academy Charter School, who plans to show students how they can measure nanoparticles and Colette DeHarpporte’s company’s Laser Classroom.

The event at Sabathani is just the beginning, said Everets. She said that SELF hopes to expand with educational events in other sciences, including alternative and renewable energy. The long-term plan is to buy and equip a mobile science lab that can travel from schools and community centers to reach as many young minds as possible. The need extends outside of the inner city, she said, and a van could bring the ideas of science to students in rural areas as well. “There is as much need there as there is in the city,” she said.