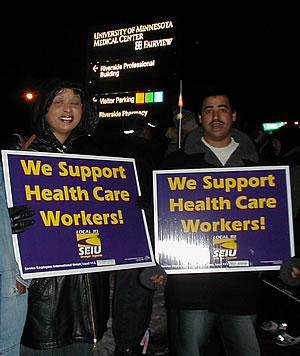 Every day in Twin Cities hospitals, members of Service Employees International Union Local 113 provide critical care to thousands of patients. With the launch of a new campaign Wednesday, they hope to become a force for change in the entire health care system.

The effort, themed Together for Quality Care, “isn’t just about health care workers,” said Charles Mitchell, a patient care aide at United Hospital in St. Paul. “We can’t provide quality care until everyone in our community, our state and our country has access to quality, affordable health care.”

The launch coincided with the start of negotiations between Local 113 and Twin Cities hospitals on contracts covering some 5,900 workers. One focus of the talks is the fact that too many health care workers can’t afford coverage for themselves and their families.

“It’s time to hold hospitals accountable – starting with quality, affordable health insurance for their workers,” said Lori Theim Busch, a phlebotomist at North Memorial Medical Center in Robbinsdale. She spoke at a rally to kick off the Together for Quality Care campaign.

Health care “is big business,” said Minnesota Attorney General Mike Hatch, whom the union has endorsed for governor. “Big benefits are being paid to certain people, but a whole lot of people are being left behind.”

Hatch said there is “no excuse” for hospitals “not to provide health care for each and every one of their employees.”

St. Paul Mayor-elect Chris Coleman lauded the campaign, saying, “This is about the kind of society we want to create.”

Local 113 is negotiating the hospital contracts in two groups: the Allina group consisting of Allina-owned facilities; and the Metro group consisting of about a dozen other hospitals. On Wednesday, Allina and Local 113 announced plans “to develop a strategic alliance to solve problems and improve the delivery of quality health care in Minnesota.”

Specifically, Allina and SEIU agreed to work together over the next 45 days to establish a partnership agreement. During that time, both parties have agreed to work cooperatively on a number of issues, including expedited negotiations for metro contracts, maintaining a positive approach to communications, and joint problem-solving. During this period, Allina has also agreed to neutrality in union organizing campaign efforts.

“We are working with Allina to solve issues with affordable health insurance, improving quality patient care, and building a safe and respectful workplace,” said Julie Schnell, president of SEIU Local 113. “This is the beginning of an unprecedented strategic alliance that is in the best interest of our patients and our communities.”

“This is the first step to improving quality health care for our patients and our communities,” said Dick Pettingill, president and CEO, Allina Hospitals & Clinics. “Our plan to work together will make our hospitals the best in the Twin Cities and around the state.”

According to Pettingill, among Allina’s specific objectives for exploring a partnership agreement are reducing employee injuries, reducing use of sick time, securing active participation in achieving department productivity goals and improving patient satisfaction, and establishing labor-management committees at each site.

In contrast to Allina’s actions, Fairview Health Services is going in the opposite direction, the union said. Fairview has implemented a new health insurance plan that provides as many as 52 different options, all of which workers say leave them paying more for their health care.

“I left my job at Fairview when I heard about this plan,” said Lane Toring, a staff pharmacist that recently began a new position at Abbott Northwestern. “My out-of-pocket expenses were going to be about $10,000 per year and I couldn’t handle it financially.”

Noted Local 113 President Schnell, “Our goal is to improve the quality of care for patients, families and the community . . . We have offered hospital employers in the Twin Cities the opportunity to build something strong together.”