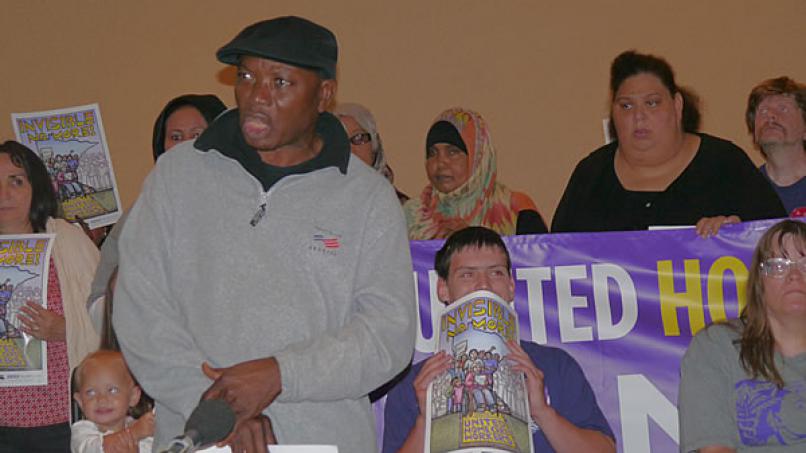 Home care workers and the clients they serve held a press conference Friday to describe how a union will improve their lives. (Workday Minnesota photo)

“Eighty years ago, the people who cleaned the hospitals, mended the linens and cared for patients were mostly women and people of color – the work they did was not seen as real work. When Congress passed the National Labor Relations Act in the 1930s, they left these workers out of the law,” said Jamie Gulley, president of SEIU Healthcare Minnesota.

“But 80 years ago, something special happened here in the Twin Cities. These workers – women, many of them women of color – joined together to fight against low pay, lack of benefits, and most of all, the lack of respect that accompanied their work. They formed a union and won voluntary recognition to create the first healthcare workers’ union in America.”

Mary Kay Henry, the international president of SEIU, joined in the weekend’s celebration. Henry, the first woman elected to lead SEIU, began her career as a union organizer with SEIU Healthcare Minnesota.

Although exact numbers aren’t yet known, the union estimates that between 12,000 and 15,000 home care workers would be eligible to vote in a union election.

“For too long this vital occupation, upon which the health and independence of millions depend, has been treated as marginal and casual work to be performed under poverty conditions,” said Henry. “This has been so, even as the occupation has become among the fastest growing and most vitally important within the American health care system.

“I welcome these workers’ efforts to make home care jobs into the good quality jobs that we need to get our economy moving again and to ensure that all Americans have access to the quality care they deserve.”

Home care workers spent part of the day laying out their vision for their union, which they shared during a press conference.

“The PCA [personal care attendant] program is a blessing when it works. But in my years as a PCA, I see that most of the time it’s not working very well because of the high turnover and the lack of training opportunities. I have met and talked with many other PCAs — the problems are affecting all of us,” said Shaquonica Johnson, a home care worker from St. Paul. “I want a union so that if my family ever needs to rely on a PCA in the future, there will be a lot of good, well trained, reliable people to draw from.”

“Home care workers provide care for our seniors and people with disabilities,” said Gulley. “Yet today they have the same struggles the hospital workers who founded our unions faced 80 years ago – low pay, lack of benefits and lack of respect. We look forward to their inclusion in our great tradition of improving people’s lives.”