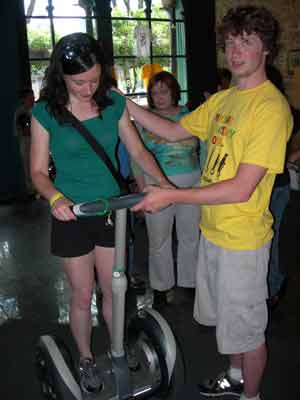 The author gets a few pointers from the tour guide.

I have to admit that I have long been skeptical of Segways, and in particular, the Segway tours down by the river. When I ride my bike by the Minneapolis waterfront, I often encounter an annoying train of middle-aged tourists on the slow-moving devices. There are usually at least 20 of them, and they always take up the whole damn path. “Good Lord,” I think. “Can’t they walk?”

Segways seem so American to me. Instead of walking or riding a bike, activities that involve “exercise” and little to no expense, a Segway costs $5,000 and only requires that you stand there. I mean, it’s no secret that Americans are incredibly lazy. We have the highest rates of obesity in the entire world, but we have a plan to deal with it. Simply kick back and crack open a Diet Coke to offset the two liters of Dr. Pepper we just drank.

My point is that Segways seems to embody the great American compromise. We want to be thin and look hot, but we don’t have the time to cook healthy food and do a few crunches. We want to go on a walking tour of the historic Minneapolis waterfront…but we don’t want to walk.

My Segway-related disgust was so intense that I realized it probably wasn’t fair. Who was I to judge so harshly? Clearly, I needed to check it out for myself. So I found the local Segway tour website, and learned that it would cost $80 per person for a two-and-a-half hour “magical history tour.” What a bargain! Whittier Globe columnist Nurse Missy and I went to check it out.

We arrived at the little storefront down on Main Street half an hour before the tour began and sat down with our group to watch a safety video. Industrial video actors smilingly demonstrated the proper way to handle one’s Segway. Then they’d cut to scenes depicting irresponsible riders hot-rodding their way to terrifying crashes. Sometimes the crashes were so gnarly that they could only show animated reenactments. I can’t remember the last time I laughed so hard. Missy was crying. The other people who sat through it stoically made it all the funnier. It was better than those dated sex-ed videos from junior high.

After the video, the collegiate male tour guides set us up with our Segways. We choose our helmets (red for me; Missy brought her very own nurse-approved white one), and glided out onto Main Street. We “practiced” maneuvering our Segways for about 15 minutes, and then set off on our magical history tour. “What makes it magical?” muttered an older gentleman. “There’s nothing magical about it,” stated Josh, the good-natured, red-headed tour guide.

We stopped by the Pillsbury A Mill. Kipp, our knowledge broker for the day, gave a speech about the guy who built the A Mill. Apparently, he was a raging alcoholic who went on a “four-year bender” when he finished up with the mill. Although the delivery of the speech was a little rote, I appreciated that it was gossip-based.

We then crossed the Stone Arch Bridge. “I’m really embarrassed,” Missy said to me as we weaved through crowds of pedestrians. I rolled up alongside a middle-aged couple. The woman made eye contact. “If you don’t mind me asking, how much does it cost to do that?” she asked me. I admitted that it was $80 a person. “Wow,” she said.

Soon we stopped at the Stone Arch Bridge for another history lesson, this time about James J. Hill, the rich guy who built the bridge to show off his wealth. Kipp explained that Hill was a real eccentric—for example, he carried a key ring with 200 keys on it everywhere he went. His quirks, apparently, have led historians to believe that “something was wrong with him,” and that he was probably “obsessive-compulsive” or “had syphilis.” “Because they’re pretty much the same thing,” quipped Nurse Missy.

We moved on, going past an opening-day celebration for the new Guthrie. We passed a family of liberals. A little kid asked his mom what our deal was. “Oh, those people just don’t want to walk,” said Mom. It’s funny—that’s how I felt about it too, but I still wanted to punch that kale-eating, self-righteous soccer mom in the face. It’s like the minute you step onto one of these silly machines, you immediately lose your humanity. It’s like you’re in the circus, or an animal in the zoo. People point and laugh and wave and make editorial comments as if “they can’t hear us, they’re on Segways!”

All this was really starting to take a toll. Luckily our tour guides gave us an extended break at the Mill City Museum. We were offered our choice of “cookie, brownie or Rice Krispy bar” and a “fountain drink” or water. This break gave our tour guides an opportunity to conduct public relations on behalf of Magical History Tours in the Mill City courtyard. Finally, revived and ready for more, we re-mounted our rides.

This time we got to use the yellow key, which meant we could go eight miles an hour instead of just five. However, once we got out on the path, we were going as slow as ever. “Let’s pick up the pace!” Missy pestered Evan, the guide in front of her. Evan got his walkie-talkie out and suggested to Josh (the guide at the front of the line), that we speed things up. At this moment, an older gentleman from Texas toppled off his segway, flopping over into a bush.

Everyone stopped, choking back giggles and arranging looks of concern on their faces. Unable to dismount her Segway without it rolling away, Missy segwayed to the front of the line, offering her nursing services. “Are you okay?” she asked the man. “I’m fine!” he said. “No, I mean, I’m a nurse…maybe I can help you out?” He wasn’t having any of it, insisting he was fine. We moved on, but soon the man took Evan up on his suggestion to head back to the storefront. “I don’t give a rat’s a** about history,” he said to Evan. “I’m already an hour past drinking time.”

We had a final history lesson over on Boom Island. Kipp sat us down in the blazing sun, so I have no idea what he talked about—I was too distracted by thoughts of getting a horrible suntan. After what seemed like eight hours (I guess it was about three), we finished the tour.

Should you go on the magical history Segway tour? I tend to think no. Although Segways are the world’s laziest mode of transportation, they are also strangely excruciating. “I’m getting a blood clot!” Missy said to me as we slowly crossed the Stone Arch Bridge. Segway riding forces you to stand in a static position for hours, which is physically agonizing—but perhaps strangely comforting to anyone who works in a cubicle. For your money, I’d suggest walking the trails down by the Mississippi, and reading those little historical signposts if you want to make it educational.