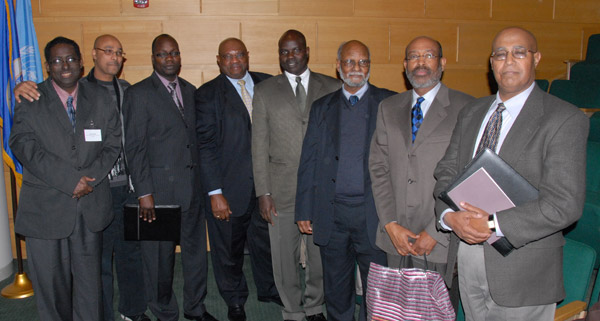 The Forum that won many nicknames before it even began left participants with hope.  It has been called an historic conference, never done before. Even coordinators won nicknames: risk takers, visionaries, concerned citizens, dreamers and so on.  What matters the most, after all, for organizers and the attendees was accomplishing one objective: bringing these communities together to talk about their common future.

“Well, if that was the case, it was accomplished,” said Ahmed Jaber, an Eritrean, former UN employee who came from New York for the meeting.  The conference brought together academics, human rights activists and intellectuals in the largest gathering of Horn of Africans ever in Minnesota.

The educators, clerics, and statesmen gathered Friday, December 5th at Hubert H. Humphrey Institute for Public Affairs to set the stage for intentional movement toward peace and reconciliation in the Horn of Africa.

Saeed Fahia of Somali Confederation, a member of the organizers, read the introduction speech and reminded the audience that for the past 50 years, governments and opposition groups have been brought together without any tangible results.  This time, he said, “we want to target and give opportunity to people, use the people power. The purpose of the conference today is to engage the Horn of Africans, Eritreans, Ethiopians, Somalis, Djiboutians and others, to engage peace- making efforts in their respective countries.”

“In this region, we have seen all kinds problems –famine, wars, droughts or even genocides and I think it is time for the Horn of Africans to take the matters into our own hands and try to find a last solution for our people. How can we stop the ongoing problems? One of the objectives among others of this conference is to open a genuine dialogue between us.  So, now we begin our long awaited discussion for the future of our people in the Horn of Africa and rest assure, it will not be the last one,” said Fahia.
Absence of peace: Can there be Progress toward Democracy & Development?

“Peace is the key for any development.” said Dr. Bereket Habte Selassie, Professor of African Studies & Law at the University of North Carolina. Bereket, who was the first speaker from four speakers of scholars and human rights activists, expressed that how in the Horn of Africa, the word peace is “a valued and hot commodity.”

Selassie argued the need of democracy in the region. “Democracy is a prerequisite for everything and development should follow, not vice versa. That is dictators arguments, they say development now and if you bear with  me, I will hold the elections later, sometimes, setting up fake dates for elections. That is lie. Democracy should be first.”

He said the whole world now embraces democracy including China, but what happened to the Horn of Africa. “I know and you know, the region is ailing and we can change that. The question is how?” said Selassie.

“This is the “People to People” initiative. That is crucial, because our governments failed us. It is common problem throughout the continent of Africa,” said Selassie. “Even though some are better than others, like Botoswana before and Ghana now, we still have a long way to go in all Africa before our governments become accountable to the people. What we need. at minimum is accountability and officials elected by the people for the people. Until we see that, we will not reach our goal of stability and development. Human security is important, my friends, for human development. Making secure anyone from any danger from violent and non-violent threats to their lives and well being is crucial, that is a human security. So, peace brings democracy and democracy vise versa, let us embrace all.”

Somalia experience: What the rest can learn

Dr. Ahmed Samatar, Dean of the Institute for Global Citizenship, Macalester College gave a stern warning to the Horn of Africans: “I am warning you, Horn of Africans, please, listen to me carefully, accept the principle of non-violence and you have a chance to survive in the Horn.”

He told the audience that Somalia currently have three scenario and in combination of all becomes  “Catastrophic”. The Somali people confront now these elements, some of the Somalis know while others don’t.  The elements are: Loss of Sense of Peoplehood (nothing else we have in common except we look alike, talk alike….etc. & meet places like coffee shops), the death of national institutions (lack the  rule of law) and the bad odor of leadership (the absence of a leader capable of facing the current challenges through legitimacy, with wisdom and skills). “With those scenarios, I think we are facing Catastrophic” Samatar  said speaking each scenario in detail at the Conference.
He said that “the other point I want to present in this forum, in somehow relates what I mentioned before: Can Somalis survive in their own political death ? Responding to himself said; I am not sure, if they can. One can’t give up human beings who are still alive.”

He said recent report show that Somali population in Somalia now are 45-50% malnuirated. “even the current president came to Minnesota recently and never even spoke about it.”

Somalia’s fate, he said, is currently in the hands  between legless, no capacity government and merciless militia that want to force onto the Somali people what he called a “Islamist Project.”
So, what are the lessons for the other people in the Horn of Africa can learn from this, the people in the region?

The answer is the flip side of  this. Despite the animosity between the Ethiopians and Eritreans, I think these communities should think bigger. He called  for triple identity, Eritrean should become Eritrean first, then Ethiopian and Pan-Africanist and Ethiopians vise versa. He warned that if you don’t do that and retreat to nationalism or your own comfort, it will not solve anything including the challenges we face in the Horn of  Africa.

“Triple identity concept with action not just talk can bring results and can make you survive from political death.” Dr. Samatar told the audience.

In the final analysis, Dr. Samatar concluded that the  people in Horn of Africa need: Freedom – respecting of individual liberty, equality – Everyone equal under law, democracy – accepting the differences and adopting principle of non-violence.

Obang Metho who travelled from Canada, where he currently resides, to this conference told the audience repeatedly that no one immune from abuse until we all embrace that all humanities are equal. Obang who came from the Gambela region, South West of Ethiopia said when he went back to his region after studying in Canada, he was shocked what he saw there. One hospital for half million people, one doctor for all, no access for clean water, less than 10% of the population have an access of clean. He said Gambela is the most marginalized region in Ethiopia.

Obang mentioned the massacre that took place in Gambela on Dec. 2003. He said Ethiopian forces from the Ethiopian government went from house to house killing civilians mostly educated, some of the people I was working with. The idea of the government was “kill the snake from the head and the rest of the body is nonsense no matter how big it is.” In that killing, the head of the Enuak people eliminated.

I think until we can come together and value the live of everyone, we will not be where we want. Governments abuse their power on to one group while others watch, then, what happen next, the abuse moves to another group, and another group.  Obang said the educators told us the academic solution but I will tell you humanely solution, put yourself under shoes of others and think. The only way we can stop any form of violence or injustice is to put our humanity first and ethnicity second or third. Let us respect the universal law of individual right is a human right.

Saving the Horn: The urgent need for Track-2- “The People Diplomacy”

“There are those who may question the very idea of a Diaspora community far away from the daily suffering and challenges of the people of the Horn of Africa trying to get involved in a civic effort that is intended to enhance the possibility of peace in a region desperately starving for lasting peace.” Begun his speech by Seyoum Tesfaye, Chairman of Eritrean Global Solidarity.

He said  “do we have a right or a duty to get involved in a very volatile region that we have left behind voluntarily or were forced to abandon it due the crisis that seems endemic to the region? It is a legitimate doubt presented by a way of question.”

Seyoum said that those of us who feel that we have a duty and a responsibility to do our share to contribute, to the extent that is possible, be it from the comfort zone of an air-conditioned American conference room, must take the doubt raised with all the seriousness we could master. The effort to add our modest voice to the expanding conversation on how best to give back to our former homeland while at the same time waging an all-out efforts to find our rightful place in the American quilt will not be an easy process.

Which comes first: the egg or the chicken?

Should the Diaspora first focus in finding a more accelerated way of becoming an integral part of the ongoing American grand experiment or stay confined within the margin while being consumed by cascading events in the country or region of origin? This is not counterpoising two possibilities but setting up the parameters of the challenge to stress the choice being faced by newly arriving immigrants from the Horn Region like all other previous immigrants that had finally blended in into the American society empowered and integrated into the very fiber of the political and economic system.
Then Mr. Tesfaye pose a question: Could a Diaspora community experimenting with its newly enshrined hyphenated existence be formidable enough to leverage its limited integration into the American civilization to help enhance the possibility of peace in a besieged region?
Responding to his question he said “the most optimistically simple and simplistic answer will be yes it could.”

He said that he is a firm believer that our duty to America, once we have voluntarily accepted US citizenship, comes ahead of our loyalty to our former country. Cultural ambiguity and sense of loss that most immigrants feel when giving up their original citizenship is understandable. But failing to grasp the full legal implication of being an American citizen and not deploying this new privilege in its correct and legitimate way has grave consequences.

dealing with our former homeland. We must stand for democracy, rule of law, justice, human rights and fairness.

Seyoum concluded by saying: “like all other immigrants who wish to do their best to help their country of origin we will slowly build our skill level and, whether we like it or not, be absorbed into the American system as Eritrean American, Ethiopian American and Somali American- with the hyphenation as a comforting concession to our African (ancestral) soul. We are citizens of the USA. We are Americans. We have to respect the American Constitution and present our concerns under the protection of the Bill of Rights.”

Sponsored by African News Journal, Eritrean Forum in Minnesota, and organized by Confederation of the Somali Community, Eritrean Forum and Gambella Relief Organization, The Horn of Africa Peace Forum examined pathways to peace in the Horn of Africa region and explored ways of empowering the grass root and civil society so that a lasting peace can be based on understanding and trust.