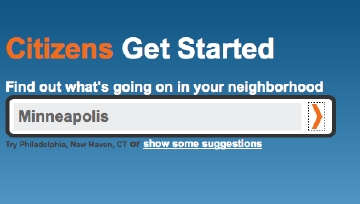 In late December, the TC Daily Planet began hosting a SeeClickFix widget. Based in New Haven, Connecticut, SeeClickFix has drawn nationwide attention by creating a platform for average citizens to air their concerns. According to Jeff Blasius, SeeClickFix co-founder, it is a “toolbox for social civic engagement.”

SeeClickFix encourages citizens to report non-emergency issues, like graffiti or potholes, in a public format. SeeClickFix hopes making these and similar nuisance issues public will make the appropriate agencies more likely to address the problems.

Issues reported are posted on the website. The word “open” next to an issue indicates that it is active. Resolved issues are marked “closed” and remain visible for three weeks. Then they are archived. Anyone can read posted issues, make comments and even close an issue. An issue can be closed one day and reopened the next if someone is not satisfied with its resolution.

Posts and comments are not prescreened. This unregulated discussion is one of the website’s fundamental principles, according to Ben Berkowitz, co-founder and chief executive director of SeeClickFix, who said the system is “open and transparent.”

SeeClickFix’s openness is popular with social network users and bloggers. In addition, local businesses, media outlets and neighborhood organizations use the site to monitor their communities.

Anyone can sign up on the SeeClickFix site to “watch” any area they choose. “Watchers” receive email alerts from SeeClickFix whenever an issue in that community is reported. They are also notified when comments are posted regarding the issue.

Last year, both Minneapolis and Saint Paul signed up to watch for issues pertaining to their cities. Thus far, reports have been few. City officials in both cities prefer that residents use their designated hotline numbers to report non-emergency issues.

Minneapolis residents can dial 311 to report an issue. Don Stickney, director of 311, stated Minneapolis is part of a consortium of cities (including New York and Chicago) using the service. Minneapolis began using 311 four years ago.

Since December 1, 2009, SeeClickFix has referred 14 emails to 311; however less than half were 311 issues. According to Matt Laible, spokesperson for Minneapolis, those cases were processed the same as other 311 calls.

“A request for services goes to 311 and gets routed into our system,” Laible said.

Like all 311 calls, they are assigned a tracking number and are required to be resolved within 14 days. After the case has been resolved, 311 staff inform the complainant of the outcome. Minneapolis residents can also reach 311 by email at Minneapolis311@ci.minneapolis.mn.us.

Saint Paul residents can call 651-266-8989 to report problems. The city receives between 400-500 complaints daily. According to Angie Wiese, Saint Paul Public Information Officer, the city has received over 2,000 complaints this winter just on snow shoveling.

“The complaint line is how we know about these issues,” Wiese said. “Not that this [SeeClickFix] can’t be utilized more.”

Wiese commented they like complainants to provide contact information because sometimes talking directly to the complainant helps to clarify the problem. However, complainants can choose to be anonymous.

“Though we like people to give their information, we understand there are situations where the person fears retaliation,” Wiese said. “All of our complainant contact information is confidential.”

SeeClickFix also allows complainants to remain anonymous. They believe anonymity encourages more people to report issues. Emails will not be shared nor will user names be verified.

Another post questions why “a union-busting, farmer-mistreating chain business like Starbucks was given a permit to operate in Minneapolis.” According to comments posted, two people closed this case because they thought it was inappropriate for the venue. However, it was reopened, apparently by the initial complainant.

On the Saint Paul site, a post that was flagged and subsequently removed referred to the Ramsey County Sheriff’s Department as being “responsible for criminalization of an entire generation of people of color” and called for its immediate demolition

Some of these problems might be eliminated if SeeClickFix conducted a perfunctory prescreening of posts. Berkowitz stated he is opposed to prescreening.

“We will not advance screen,” Berkowitz said. “There are over 12,000 issues in the system and very few are inappropriate. We will always respond to issues flagged as inappropriate in a timely fashion.”

Wiese stated approximately 20 percent of Saint Paul’s complaints filed are non-ordinance issues. Stickney thinks the number of non-city related issues is smaller. These calls just need to be routed to the proper agency.

Minneapolis and Saint Paul recognize many residents consider the Internet as a viable way of airing their concerns. Both cities have Facebook and Twitter accounts and encourage residents to post comments.