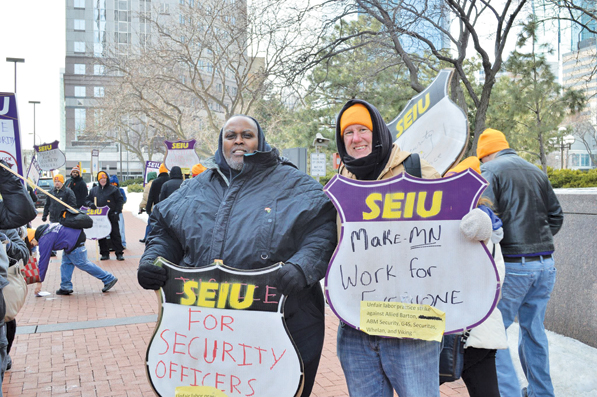 After going on a one-day strike, security officers from SEIU Local 26 came to a contract agreement with local security companies. “We were striking for better healthcare benefits, job security and better pay. You could say we were fighting to move our members out of poverty,” said Harrison Bullard, executive vice president of SEIU local 26.

Bullard’s union also participated in a “week of actions” designed to show the connections between his union, the fight for better wages, and the office cleaners’ fight for dignity and higher wages. It also sought to unite those workers’ struggle with that of workers who are being discriminated against because of their past criminal records and workers who have been wrongfully foreclosed on by the major banks. Minnesotans for a Fair Economy was the driving force behind the effort.

One worker who participated in the strike but wished to remain anonymous commented, “Despite protecting the offices of some of the nation’s highest paid CEOs, many of us are forced to take out payday loans just to cover the basics: food to feed a family, a tank of gas to go to work, or even supplies for the first day of school.”

SEIU members seemed to direct much of their protest at the major banks in town, primarily US Bank and Wells Fargo, as well as Target, one of the larger and more successful retailers in the Twin Cities metro area.

“We’re bargaining with an entire industry, not just one company” said a worker who identified himself only as Paul. “There are seven security companies. These are guys that compete against each other. They’re always trying to get more market share. They’re trying to stab each other in the back, and at the same time they’re trying to figure out ways to come together to stab us in the back.

“Out fight is the fight not just of our members, but of our community,” said Bullard. “We have to be aware of what the community is struggling with. We need to be a part of all aspects of our members’ lives. We had two members that we know of that have gone through foreclosure. We have one member who has been living in a motel. That’s why we joined the week of action and participated in the anti-foreclosure work of Occupy Homes.”