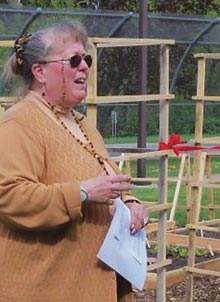 "You have been given a second chance, and it would be a shame to waste it."-Christine Aquino

“Be the change that you want to see in the world” is inscribed on a pendant that Christine Aquino wears around her neck. She has taken the words’ meaning to heart.

Born in St. Paul, Aquino was a self-described bored, young housewife in California, she said, when she began to take classes in horticulture.

She worked installing plants in malls and offices, and soon was doing interior and exterior landscapes for celebrities, including Dustin Hoffman, Stephen Spielberg and Sidney Poitier.

Years later, when Aquino’s father died, she decided to pack up and move with her 21-year-old son, Gabriel, back to Minnesota and her roots. “I wanted my son to get to know what was left of my small family,” Aquino said.

After some online searching, she selected Red Wing, Minn., as their future home because it had vineyards and was near water.

The two moved in December 2008. She attributed not feeling well to losing her father and making a major life change and move. By April 2009, she was diagnosed with stage 3 colon cancer.

“I really kind of took my diagnosis in stride,” Aquino said. “There had been a lot of cancer in my family, so it was not as much of a surprise as it might have been.

“I can do this,” Aquino remembered thinking. “I can put one foot in front of the other and do what my doctor tells me.”

She underwent major surgery, radiation and chemo, followed by a second major surgery and 10 months of recovery.

“I lost my insurance and had to spend down my bank accounts,” Aquino said. “I could only keep my car and house. I had no job, no future and no money. My son and I didn’t know how to relate to each other. It was pretty grim.”

About that time, a neighbor came over and dug up a little garden plot for her. And a seed of an idea started to form in her mind.

“I was thinking of people being released from prison,” she said. “They’re happy they are going home, but at the same time they are scared to death, much like I was.” She thought that gardening could give them a chance to start conversations, work with their kids, and feel the warm sun on their backs and hands.

“This idea kept growing,” Aquino said. She had been at home for a while and decided it was time to crawl out from under the covers. She applied for a job at the local senior center and was soon working as a receptionist and teaching classes to elders. She talked to one senior about her thoughts of gardening for the offenders, and her idea was passed on to the volunteer coordinator at the Minnesota Correctional Facility-Red Wing.

In May 2011, Aquino began working with six offenders. She drew a plan for a vegetable and flower garden, and a 1,000-square-foot plot was planted near the correctional facility.

By harvest time, that plot yielded not only food for the offenders to share, but more than 6,000 servings to give to local food shelves. In addition to gardening, the offenders learned about nutrition, cooking and teamwork, Aquino added.

“As some offenders were released, others took their place,” Aquino said. “I never once felt threatened. I never asked them about the reasons for their incarceration, but we talked about their families and goals. I can’t begin to tell you how deeply meaningful some of those conversations were.”

Aquino recalled one offender who told her that after the first day he participated, he lay in bed that night thinking about how his mother had struggled to feed him and his siblings.

“He said he felt so good that day, because he had helped kids not to go hungry,” Aquino said.

Reflecting on her experience, she said that when one is faced with a life-threatening illness, little things like listening to beautiful music or hugging a child become very important. In the same way, an offender who has lost his freedom cherishes the small gifts life has to offer.

“You have been given a second chance, and it would be a shame to waste it,” Aquino said.

The garden has doubled to well over 2,000 square feet this spring, and Aquino said she is hoping to provide much more for the food shelves. “After 30 years of baby-sitting celebrities whose gardens are novelties to show off,” Aquino said, “to use these skills to help offenders make this garden happen-it just can’t get any better than this.”