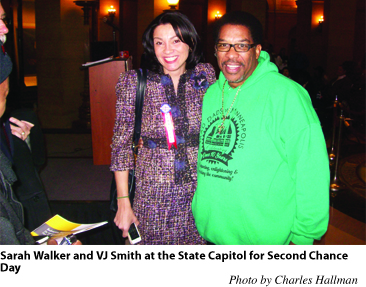 When Sarah Walker first lobbied the Minnesota Legislature on behalf of former offenders, she didn’t see it going over very well. “The first time I organized this, I was concerned that this would be received very poorly,” recalls Walker, the COO of 180 Degrees, Inc.

“Since then we have gotten more legislative leaders interested in this issue. I think we really fundamentally changed the dialogue about the issue at the Capitol. We passed three bills in 2009, and we’re hopeful again this year for another good year,” continued Walker.

“We need to be making some noise around here if we want a second chance,” said MAD DADS CEO/President VJ Smith last Wednesday, January 16, as he led the nearly 200 participants in a call and response exercise at the 2013 Second Chance Day at the State Capitol rotunda.

Nelima Sitati of Brooklyn Park said last week that it was her first Day on the Hill event. “I’m excited to be here,” she admitted, adding that persons with criminal records have “a huge obstacle” to deal with in securing employment and housing.

As in previous years, the attendees heard short speeches from lawmakers and others then visited legislators in small groups to discuss Second Chance issues.

These issues include fair hiring practices like “Ban the Box” — not asking initial questions about criminal history until later in the employment application process. Juvenile records privacy, voting restoration, and clearing former offenders’ records after they’ve served their sentences are also on the list of desirable reforms.

“We are extremely positive about the outlook of passing Ban the Box in the private sector in this legislative session,” noted Walker. “Mark Hasse [of Council on Crime and Justice] and I have been meeting with legislators from the first day of [the 2013 session], and we are very positive.”

Goodwill/Easter Seals Minnesota CEO Michael Wirth Davis said, “We have many new freshmen [legislators], so part of our job as the coalition is to orient them to what the issues are and talk to them on how they feel about that.”

Many legislators on both sides of the aisle understand the importance of “redemption” for former offenders, believes first-term State Representative Raymond Dehn (DFL). “I’d like to see some change in the election laws to allow people who are out from behind bars the opportunity to vote,” he said.

Sen. Jeff Hayden (DFL) pledged that he will fight for former offenders to get their voting rights restored. “I think it’s time for us to take a real critical look at those folk that have been in the criminal justice system and are trying to find a better place to raise and take care of their family,” he said.

“We are talking about justice for all of our families,” added LGBT Community Leader Nicque Mabrey.

Minnesota Human Rights Commissioner Kevin Lindsay said his department has been meeting with “various business leaders…educating employers” on not discriminating against applicants simply because they may have criminal records.

EMERGE Villages Director Marvin Clark pointed out that even lawmakers get second chances. “There are a lot of people in power that make mistakes and are able to pay their way out. But we as middle class or low income can’t buy our way out.”

However, Walker said the Minnesota Chamber of Commerce has been a “major opposition” to Second Chance issues. “You look at their agenda, and they say we don’t have enough workforce, particularly from communities of color.

“Part of the reason why they can’t find qualified applicants is because they exclude them if they have an arrest record or a conviction that is 10 years old. We have to look beyond that, and we have to make sure that we produce taxpaying citizens and not create a system of perpetual punishment,” Walker said.

“If we are [serious] about giving people a second chance, they contribute to our economy and boost our communities,” surmised Sen. John Marty (DFL).

Clark strongly suggested that one day is not nearly enough to speak on Second Chance issues. “The only way any action is ever going to happen is that you continue to speak out on a regular and constant basis. A lot of people are going to speak today and won’t speak again until next year at the same time.”

“Let it be Second Chance Day at the Capitol every day,” said Mabrey. “We really need to push the needle, stay persistent, and be persistent,”