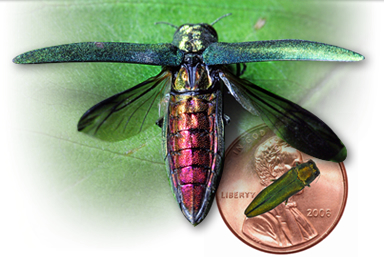 So the day has come.  The pest that has destroyed millions of trees in Michigan and Ohio since its discovery in 2002 is here in the Twin Cities.  The emerald ash borer, an exotic, iridescent beetle was imported (inadvertently) from Asia, where it is a native beetle.  The beetle, as destructive as it is beautiful, attacks and kills only ash trees (Fraxinus spp) by laying its eggs just beneath the bark where the larvae feed on the food and nutrients created by the tree’s leaves, essentially starving the tree. The emerald ash borer can kill a tree in as little as three to five years, and is very difficult to detect.

FULL DISCLOSURE: Karen Zumach is the Community Forestry Manager for Tree Trust, a 501(c)(3) Minnesota nonprofit that has served the Twin Cities since 1976. She is an ISA certified arborist and holds two degrees from the University of Connecticut in geology and horticulture.

The trees discovered in the South St. Anthony Park neighborhood of St. Paul last year are said to have been infected for at least three years.  In areas of Michigan and Ohio where the pest has devastated their urban forests, initial estimates point to at least six years of infestation prior to discovery. The delayed discovery is largely responsible for the widespread devastation in that area.

The Twin Cities, however, are a bit ahead of the curve. We have a large pool of informed citizenry and tree care professionals who have been aware of this threat to our urban forest for several years.  Plans were created and people have been on the lookout.  These reasons alone may spare us from the devastation seen in other parts of the country where time was not on their side.

The Twin Cities are well known for being appreciative and respectful of their urban forest.  Urban greening is a part of life here, more so than other places in the country.  In 2004, the tree canopy cover of Minneapolis was around 26 percent, compared to 16 percent in Milwaukee and 26.4 percent in Kansas City. The number will be updated this year, since the city has contracted Marvin Bauer from the University of Minnesota to complete a canopy cover assessment.

Trees provide a multitude of benefits, such as energy conservation (three 25′ trees strategically placed around your home can provide up to eight percent energy cost saving), stormwater abatement (mature trees can use 40 or more gallons of water per day), increased property values (3-7 percent) and air cleaning benefits (100 trees remove up to 130 pounds of air pollutants per year).

What can you do to help our urban forest? Two short answers: plant trees now and whatever you do, DO NOT MOVE FIREWOOD! Studies have shown that the movement of firewood is one of the biggest dangers not only to our urban forest, but also to the wild places of our great state, which happen to be home to nearly 900 million ash trees.  The loss of these trees would have tremendous impacts on our ecosystem and our economy.

Many municipalities in the Twin Cities offer trees to residents for very little cost.  Through a partnership with Tree Trust, a local nonprofit, the City of Minneapolis offers trees to residents for $25.00 each.  While only one tree is allowed per residence, this program goes a long way to increasing the city’s canopy cover without increasing maintenance costs borne by the city. The City of St. Louis Park also partners with Tree Trust to offer a similar program to its residents.  Friends of the Parks offers trees as their yearly fundraiser for residents of Ramsey County.  Other municipalities around the metro offer tree sales each year, so even if you missed it this year, mark your calendar to seek out low cost trees next March.  Especially if you have an ash tree in your yard,  planting a replacement tree now will allow the new tree time to grow and will provide the benefits you would otherwise lose without your stately ash tree.

So, you’re up at the lake doing some clean up after the winter, or, you have some leftover firewood from this uncharacteristically “short” winter.  The dead wood from the property up north seems like a perfectly good solution for burning at your home in the Cities.  Or, the leftover firewood would make for a great opening weekend bonfire.  Forget it.  Not only is moving firewood a terrible idea, it also could get you in big trouble if you are caught (up to $7,500/day of violation).  The Minnesota Department of Agriculture currently has quarantines in place in Ramsey, Hennepin and Houston counties, which essentially means, no wood goes out and any wood that comes in cannot go back out again. Not to mention, do you really want to be the person responsible for spreading a pest to the northern part of Minnesota, home to millions of native black ash?

The Minnesota Department of Agriculture website has many resources to inform residents about the emerald ash borer, what to look out for and what you can do protect our urban forest.  Refer to it often, especially if your normally healthy ash tree looks a bit sparse this year.  Be informed.  Ask questions.  Plant trees. Don’t move firewood.  If each of us takes these small steps, we may be able to effectively mitigate the loss of ash trees in our urban forest and spare ourselves from the kind of devastation we saw not too long ago as our cities battled Dutch elm disease.