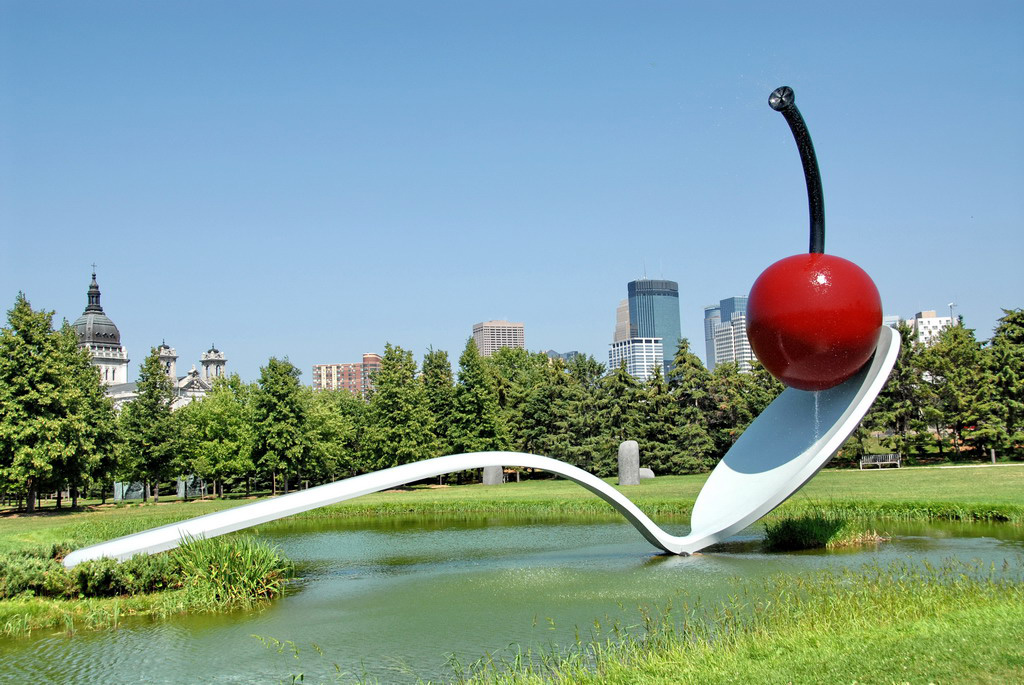 Everyone recognizes Spoonbridge and Cherry, by Claes Oldenberg and Coosje van Bruggen: it’s become one of the Twin Cities’ visual trademarks. It sits across from the Walker Art Center in the Minneapolis Sculpture Garden, the sculpture park everyone in the Twin Cities knows if they know a sculpture park.

But that’s not the only game in town: depending on how you define “notable,” there are at least four notable sculpture parks in the Twin Cities area, and this is the do-or-die season to see them.

You have to go to a few sculpture parks to realize just how world-class this place is. On 11 beautifully manicured acres are arrayed dozens of works by the world’s greatest contemporary sculptors: besides Oldenberg and van Bruggen, the artists represented include Richard Serra, Sol LeWitt, Alexander Calder, Mark di Suvero, Dan Graham, Jenny Holzer, Ellsworth Kelly, Frank Gehry, and a host of others. You can return to this bounty again and again, and reap new rewards every time. Quite probably, if you’ve read this far, you’re already familiar with this park, so let’s move on. 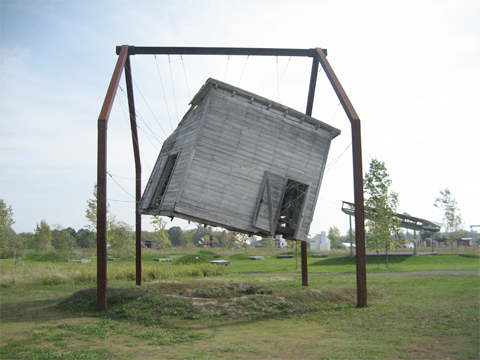 This is the other local sculpture park you’re likely to have heard of, but it’s not quite as local as the others: it’s near Taylors Falls, about an hour’s drive north of the Twin Cities. As you might guess, they have lots of space up there, and you get a decent little workout traipsing around looking for art. Some of the art here is very obvious—a house-sized house suspended in the air by cables—and some of it is very subtle, as subtle as a TV monitor half-buried in a hillock hidden by tall grass. Franconia is alive with artists in residence creating new work, educational and recreational programs, and a constant turnover that means that even if you visit Franconia frequently, you’ll never step in the same park twice.

This park is hidden in plain sight, just shouting distance from the State Capitol. A signature di Suvero towers over the park, but the focus here is on community rather than big names. Some may regard the up-with-people collection as aesthetically undistinguished, but others may find these pieces to be more accessible than the head-scratchers at the Walker (How much are those giant sheets of weatherproof steel worth?!) or the willfully bizarre hodgepodge at Franconia. It’s certainly worth a visit; everyone will find something to appreciate, but the best thing about this park is its integration into its urban setting, with local residents significantly outnumbering rubbernecking arthounds. 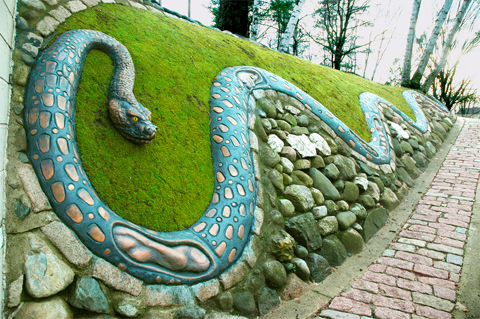 And now for something entirely different: Caponi is home to plenty of sculpture, but more significantly, the entire park is itself a sculpture. The whole shebang is the creation of Anthony Caponi, a longtime teacher at Macalester who wrought this wonder out of a pretty piece of lakeside land in Eagan. Caponi still lives on the land, but it’s managed as a nonprofit public park, with strong and diverse programming ranging from Shakespeare to the Sinfonia. If you’re not acquainted with this unique and beautiful place, you’re missing out. Of course, the same could be said of any of these four museums al fresco.

Correction: This post originally stated, incorrectly, that Caponi Art Park is managed by the City of Eagan.