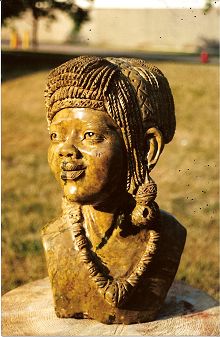 “Woman” by John Chihowa is a verdite on display at Mhiripiri gallery.

As people often turn to music to center themselves, so too might they turn to visual art as a means of seeking escape from the busyness of life. Judging from the overflowing showroom of Mhiripiri Gallery in Bloomington, Rex Mhiripiri has a place where he can regroup any time he needs it. Correspondingly, his steady demeanor confirms the idea that art often provides a refuge from the chaos of our everyday world.

Arriving at his store the other day, I find Mhiripiri outside talking to the landscaping crew, describing what he’d like to see in the dirt bedding as the group of workers completes the final phase of the new Mhiripiri Gallery. The gallery has relocated from Butler Square and before that Nicollet Mall in Minneapolis. With shovel in hand, Mhiripiri scrapes at the soil, indicating the optimum level of dirt for the bed. He turns to me, smiles and immediately switches from gardener to proprietor role.

Mhiripiri began a career in art as a painter. Throughout his gallery today hangs his many acrylics, oils, and watercolors of straightforward wild African animals, portraits and landscapes, some hinting at the influence of French impressionist painter, Monet. Some of the canvases hang heavy with thick paint only suggesting the animal they portray. But the paintings are dwarfed both in size and significance by stone sculpture.

“Okay, in Africa, only Zimbabwe does stone sculpture. The others do wood. Zimbabwe stone sculpture was kept hidden and under the lid,” says Mhiripiri, as he moves his historical account from Europe to Africa. “Zimbabwe was colonized by England, but declared their independence, becoming a black-ruled country in 1980. The lid was taken off and now there are books, remarkable books showing Shona sculpture,” he concludes.

When I was a child, I loved to dig up rocks and hammer them open to see what was inside. Mostly, I remember hurting myself and often being disappointed with the rock, too. Despite the bandages I required, I still made display cases out of shoeboxes and carefully arranged my rocks for others to see. Sitting in Mhiripiri’s gallery, I discovered how truly incredible the inside of a rock can be.

Stone sculptors uncover what lies clandestinely beneath the surface of rough, gritty rock, but not by bashing them open with all their might. Rather the treasure under the rock, both powerful and beautiful, is revealed with sometimes delicate hammering, chiseling and filing. The seasoned hand of the sculptor evinces any political or social commentary.

Mhiripiri Gallery accommodates the work of many world-renown sculptors. The work of Colleen Madamombe, Henry Munyaradzi, and Bernard Matemera all grace Rex and wife Julie Mhiripiri’s displays. Having never seen so many stone sculptures in one place, I find that the gallery resplendent with sculpture. As Mhiripiri takes my hand and walks me down the aisle, he demonstrates that there is enough room for a couple to peruse the gallery side-by-side, or for a wheelchair to navigate between the huge serpentine and verdite carvings.

“People come in here four, five or six times. Because what can you do with art? You can’t eat it. You can’t take it home and feed it to your kids. You can’t sleep in it. You can’t drive to work in art. All you can truly do with art is look at it. So art is all looks. But in art, that’s the most important thing. I tell myself that I should not be offended by people who just want to come and look and not want to buy because what do you expect to do with art? Look! And if so, then all must be welcome,” says Mhiripiri.

Juggling the interests of both business owner and artist could prove demanding. “This is a business. We’re not a charitable organization. We make money, end of story,” he asserts. “But we are civic minded, so there’s more to the story. We have a responsibility to the community, schools, students. Groups of students are welcome. We encourage people who are coming to look,” he says.

Now at home in Bloomington, Mhiripiri hopes the Gallery will become a destination place, rather than stumbling upon the store, as many did when the gallery was located in downtown Minneapolis. Now, he hopes, people will plan their day to include a trip to his gallery.

“My intended audience is Mr. and Mrs. John Q. Public. Everybody. But everybody is not from Minnesota. When people come to Minnesota for some business, they will combine the trip with a visit to our gallery. Our hope and prayer and conviction is that this will become a destination place, that you hear about it because we are on the Internet, in gallery magazines, in reviews and you come here knowing that you are coming to the building,” he says.

By intension, the parking lot is small. There is room for six, maybe seven cars. “I want people to come one or two at a time, so that when you come, just come by yourself, it allows us to visit one-on-one instead of contending with ten other people in here. I need to attend to you,” Mhiripiri says, explaining how he’s managed to build Mhiripiri Gallery into a lucrative business.

Recently, St. Paul hosted an International Stone Carving Symposium. Bringing stone sculptors from across the globe as well as a few from Minnesota, 14 artists exhibited their work and demonstrated for the public the magic of stone carving. One of these artists, Lazarus Takawira, makes his home in Zimbabwe. Mhiripiri was instrumental in bringing Lazarus to this symposium.

“I selected a world-class artist who could stand on his own in a group of 14 international artists, who would be at the top. But I also knew that for him to come here, it would benefit us,” says Mhiripiri, who also donated money for the symposium.

He expounds on his view of art in relationship to the world. “There’s no white art and there’s no black art. There is just art. (Segregating art) is a tiresome way of looking at society. It would be great if we could see that real art is an equal opportunity employer,” Mhiripiri says.

“I would like to see young, black people, people of color, if you like, more children look at what’s going on in the world of art. My concern with children is that they are exposed to art, especially the underprivileged whose exposure has been scant. It’s a fine way of taking our minds off the differences in peoples. What better way to improve understanding than to look at art?”