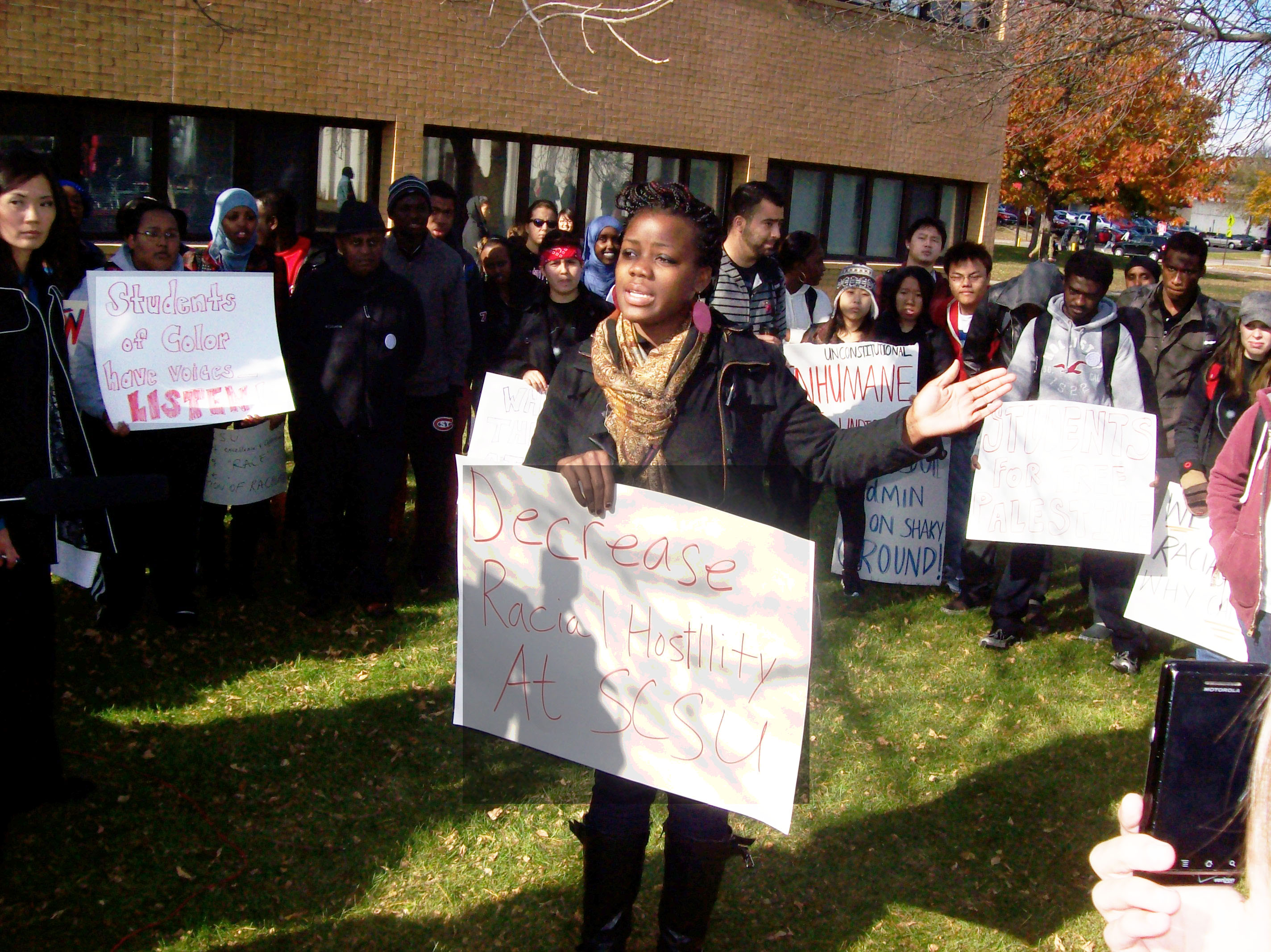 Some say that since Mahmoud Saffari’s firing in September as St. Cloud State University (SCSU) admissions director, a “climate of fear” now exists among faculty and staff of color.

Some students believe that since Saffari’s dismissal the campus environment has been tense. An October 27 noontime demonstration by Black students, other students of color and others during a scheduled groundbreaking ceremony for a new on-campus science and engineering lab got Minnesota Governor Mark Dayton’s attention. The governor, who was among the invited dignitaries, said he’d listen to them afterwards if they’d respect the festivities.

“We are asking will you listen to us and help us in our struggle,” requested SCSU Professor Semya Hakim during the nearly half-hour unscheduled meeting with Gov. Dayton. “We want [Saffari] back.”

Senior Sonchie Davies told Dayton, “We are students, and we have been trying to send [SCSU President Earl Potter] a message for weeks now. All we want are answers. He is failing to acknowledge us.”

Veronica Mora, a fourth-year SCSU student also told the governor, “I feel increasing racial hostility on this campus” since Dr. Saffari’s firing. “I don’t feel it is the same campus that it was when I first came here.”

Gov. Dayton then responded, “I will use my moral authority that I have” and promised the crowd that he’d look into the matter this week. “I will find out the facts when I meet with [MnSCU officials] and share your concerns with them directly. That’s what I’ll promise to do,” said the governor.

Afterwards when asked if he was previously aware of Saffari’s firing, or have spoken with Potter, Dayton told the MSR, “I haven’t talked to President Potter about it. I know very few of the facts, the situation and other concerns. It is not my purpose to take sides in this matter. There are always two or three or five sides to every story.”

Tamra Tademe, a SCSU professor for 22 years, says he believes that the Saffari firing is typical at a school where students, faculty or staff, Blacks and other people of color “always have a situation” to deal with.

On a one-to-10 scale, SCSU Professor Michael Davis rates the current situation at SCSU at a “minus-one. That’s how bad it is.”

“The greatest fear is [for] those folk [working] in the admissions office,” believes Professor Luke Tripp. He measured the level of concern on three levels: “Among students of color in terms of awareness and anger, it is very high… Among staff, in terms of the admissions staff of color, they are very upset. Among the typical White faculty, I don’t think it is on the front burner at all.”

Mark Jaede, a White SCSU professor said, “I have had conversations with a number of faculty and staff of color, and some students have indeed expressed anxiety about what this means for the future, and have seen this as a divisive action. And there are other people of color I’ve spoken to who have not expressed that opinion.”

“Our issues are important,” reaffirmed Tademe.

Jaede, who also is president of the SCSU faculty association, introduced a resolution at the group’s last meeting for school President Earl Potter to reconsider his decision to fire Saffari. However, he doesn’t believe that it was intended to create a “hostile climate” at the school.

“Every time you turn around, it’s something…and it is always bad,” said Davis, a longtime SCSU professor. “It’s going to get worse.”

In a phone interview last week with the MSR, Potter said that he sympathizes with those concerned over the issue, especially students.

The SCSU president also said that he is aware that the Saffari issue has caused some unrest on campus. “I acknowledge their sense of loss, their pain and their distress,” he admitted.

He also respects that the SCSU Faculty and Staff of Color Caucus “has a strong and important voice” on campus “but they are not the whole community over this issue,” believes Potter, who firmly disagrees with those who suggest that he is “seeking to divide” the group.

“I am not creating the differences of opinion,” added the school president. “I think it is shortsighted to suggest that one personnel decision suggests that all the other hard work, all the other commitments, all the other sacrifices to support our community of color, our students of color, and faculty and staff of color don’t mean anything.

“This is a disagreement over one personnel decision. Unfortunately, I can’t share with critics all of the reasons [but] I believe that this is the right decision for the university as a whole,” said Potter.

“Part of our campus is trying to move forward, and part of our campus seems to be stuck,” said SCSU Professor Debra Leigh, who is a member of the school’s anti-racism committee that met with Potter last week. “One of the things the leadership team asked the president was is there a way how systemic racism plays out in the lives of administrators,” she reported.

Leigh, a 22-year SCSU dance professor, recalled when two top Black administrators were dismissed during her first five years at the school. She believes now that “a much broader discussion” on how administrators of color are treated as compared to their White counterparts is needed rather “than [just] talking about Dr. Saffari.”

Potter said that no matter what he says, “I’m certain that confidence in my judgment among certain folk has been damaged by my decision. I understand that [but] it is not the whole community of color.”

However in light of budget cuts and the current economic conditions statewide and nationally, he admitted this fact poses additional challenges for him.

“As times change, expectations change,” surmised Potter, “I am charged with building the team that will lead the university through difficult times. We have to build a community that is a good place for students of color to be educated. In order to do that, it has to be a safe place for faculty and staff to work.
“The majority will work with us to build a strong multi-cultural community that is essential for our future and the future of Minnesota. That’s what I was hired to do and I am committed to do.”