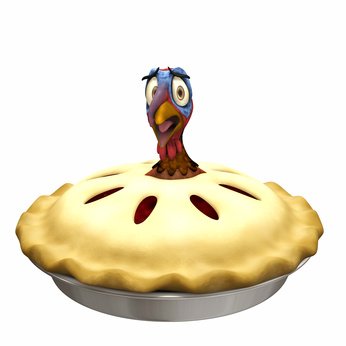 Thanksgiving is an all-American holiday but people around the world love the bird and sometimes, they have to deal with lots of leftover turkey, too. I reached out to a couple of on-line friends (I know them because we all have bulldogs.) TC Bergin Azer, from Istanbul, Turkey and Chin Aw-Yeong (HuiLeng), from Melbourne, Australia were happy to share with me their turkey traditions and recipes for leftovers.

“We do eat turkey here, but it’s not a traditional thing,” said Azer. “Until a decade ago, turkeys could be found at supermarkets only at the end of December. The turkey is the dinner for the 31st of December, along with Santa and the X-mas tree. The same goes for street light decorations.”

“The current (conservative) Turkish government is very against these, of course,” she said.

In Turkey, the bird is called hindi, from Hindustan – India – because somehow, people in the Middle East got the idea it was from the Indian subcontinent. (The Hebrew word for the bird is hodu, which also translates as Indian. In Egyptian, the word for Turkey is ‘misir’ which means corn.)

“I have no idea why, as both are from the new continent – America,” she said.

She passed along a recipe handed down from her grandmother, through her mother, who called it an ‘almost Turkish recipe.’

Leftover rice pilaf http://www.food.com/recipe/rice-pilaf-with-cinnamon-and-golden-raisins-198781 (it must be the kind with herbs, cinnamon, onions allspice, raisins, etc. This is the key to this dish.)

1) Preheat the oven to 375º. Lightly grease a shallow (2” or under) ovenproof casserole or baking dish. Layer with puff pastry or several layers of filo. If you use filo, brush melted butter between each layer. Dough should hang over the sides of the baking dish. You’ll be folding the dough back over the turkey/rice layers.

2) Spread a layer of the rice pilaf over the dough. Top with the shredded turkey.

3) Fold the pastry over the layers of meat and rice and seal, pinching the dough at the center of the dish.

4) Brush with the beaten egg yolks and place in a medium oven until the crust is golden, about 20 to 30 minutes. Serve.

Down Under Chinese Turkey Leftovers

Chin serves turkey at Christmas. “I usually stuff my turkeys with mangoes and cashews to roast. It’s a little more tropical,” she said. “We stir fry the meat with veggies. We use the carcass to flavor the stock and have it with congee (rice porridge) for days and days after. We’d be turkey’d out after that.”

Part One – the turkey stock and congee

Break up the turkey carcass and add it to the pot of salted water. Cover the pot and bring to a boil then lower to a simmer. Let simmer on low and keep it simmering, skimming any scum and adding water if needed. When the broth tastes rich, about three hours, turn off the heat and cool. Strain, discarding everything except the broth. Refrigerate the broth then skim off the fat that rises to the top. If the broth is cloudy, no harm done, but it’s because you didn’t skim it enough.  The broth will keep in the refrigerator for up to a week.

Use the broth instead of water to make the congee.

“It takes at least 15 minutes for the rice grain to mush and then you have to stir and add water occasionally so it doesn’t burn or stick. You choose how mushy you want,” Chin said. “The congee is separate and plain, served on the side. Salted duck eggs are lovely with the congee.”

Ingredients (use as much or as little as you like)

2 Tb (or so) peanut or other frying oil

Garlic to taste (more is good)

Chopped onions, carrots, asparagus, now peas, celery or any other vegetables you like

Soy sauce OR hoisin sauce OR shiao hsing wine to taste. (Don’t use all of these, as it will overpower the rest of the dish.

Cornstarch mixed with water to make a paste

1) Heat the oil in a wok and throw in the onions. Fry for a couple of minutes then add the garlic and vegetables that take a bit longer to cook (like carrots.) Fry a couple more minutes.

2) Add the rest of the vegetables and the nuts. If you are using turkey meat, add it now.

3) Fry a couple of minutes then drop the heat to medium and add the sauce. Stir. Add a little of the cornstarch paste at a time, stir and let it thicken.

4) Serve with the congee.