I decided I had to see the Guthrie Theater’s production of The Scottsboro Boys for myself when our reviewer Sheila Regan turned in a verdict that was 180 degrees from the opinion of most other local critics. Quinton Skinner at City Pages called the show “a deeply satisfying piece of art, one that burrows into the textures of the fearful and returns with bleak humor, macabre textures, and an engaging, finely crafted sense of presentation.” Sheila, on the other hand, wrote that the show “is so offensively bad it took all my powers not to walk out,” going on to say that “it scares me to think that The Scottsboro Boys will somehow be a hit.” What kind of show could be so divisive?

A minstrel show. The musical, by legendary Broadway duo John Kander and Fred Ebb with book by David Thompson, tells the true story of the Scottsboro Boys—nine black males (including a 13-year-old boy) who were accused of raping two white women in Alabama in 1931 and spent years fighting for their lives in a drawn-out legal process—in the form of a minstrel show, a form of shockingly exploitative vaudeville entertainment that perpetuated the hoariest stereotypes of African-Americans in the divided, dangerous America of the 19th century.

I walked in to The Scottsboro Boys sympathetic to Sheila’s concerns. To revive minstrelsy for 21st-century entertainment means treading between two gaping chasms of risk. On the one hand, a postmodern approach that treated the form with too much ironic remove would be offensive. On the other hand, an overly cautious production that treated the form as a museum piece, like a Klan hood hanging in the Smithsonian, would have a hard time justifying its own existence. Why revive racist entertainment just to tell us what we already know about it? Historians of minstrelsy have observed complex and sometimes even subversive relationships among its performers, producers, and audiences, and it continues to influence theater to this day—but how could that academic subtlety be communicated on stage?

One of Sheila’s criticisms of The Scottsboro Boys is that it makes minstrelsy too entertaining. “No matter how sarcastic and satirical the creative team tried to make the minstrel show tunes and clowning gags, the audience just couldn’t resist being entertained by it all…the audience laughed at the racist jokes. They applauded at the rousing tap dance number and they cheered at the end of the show tunes. I’m serious. They did. I was horrified.”

In my view, though, filling the show with dazzling song and dance is exactly what makes the show work. It’s that decision that makes The Scottsboro Boys not only about the Scottsboro Boys, but about the telling of stories on stage, opening up a hornet’s nest of questions that it doesn’t pretend to answer, but takes seriously enough to be, I think, a very important show. 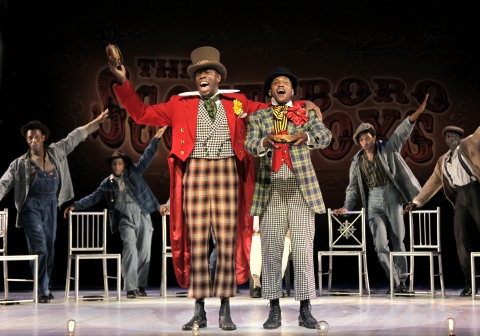 In its polished production on the McGuire Proscenium Stage, though, The Scottsboro Boys has a weight and impact it could not possibly have had at a smaller venue. The fact that it’s a major production written by two giants of Broadway and staged at a premier venue—with $65 tickets—forces you to take the show seriously. You can’t dismiss The Scottsboro Boys as just some clever idea dreamed up by a starving artist to make a name for himself. Usually those are the shows I like most, but this subject matter changes the game.

At the performance I saw, as at the performance Sheila saw, the audience was very predominantly white—and as at the performance Sheila saw, they laughed and allowed themselves to be entertained by the show. That horrified Sheila, but I didn’t share her interpretation of what was going on. I think the audience was exactly what the show’s creators likely expected it would be: 21st-century Americans who may harbor some racial bias (as Avenue Q riotously acknowledges, we all do) but who are consciously of the best intentions and who are reacting to a challenging production as intelligently and sensitively as possible.

The Scottsboro Boys is a musical spectacular, and it is entertaining—that’s the point, and it’s appropriate to appreciate that. I heard many almost awkwardly loud murmurs of assent and agreement when developments and dialogue were favorable to the show’s horribly abused central characters. When the characters emerged in blackface at the show’s shocking conclusion, though, there was neither laughter nor murmuring—just stone silence. The audience didn’t know how to react, and my guess is that’s exactly the situation the show’s creators were trying to put them in.

So what’s the point? Why the minstrelsy? Why not just tell the story straight? The show supplies one reason, quite explicitly: it argues that the case of the Scottsboro Boys functioned as entertainment for millions of 1930s Americans who may or may not have been theoretically sympathetic but couldn’t really relate to the boys’ plight and weren’t really going to do anything about it—in that way, it was akin to a minstrel show. That’s a provocative argument, and The Scottsboro Boys makes it searingly. That would be enough of an achievement…but the show pushes even harder, and farther.

In the best, most disturbing scene of The Scottsboro Boys, the corpses of two electrocuted black men stand up and perform a deft softshoe with the young boy who’s been brought in to see what his cruel jailkeepers hope will be his own fate. To turn such a gruesome, horrible scene into a buoyant song-and-dance sounds like something Mel Brooks would do—but this is no joke. By forcing you to question why you’re watching it, The Scottsboro Boys begs larger questions. Whose story is this to tell? Who should hear it, and what, if anything, should they do with that experience? What’s the difference between tap-dancing victims of unjust execution and Caroline, or Change, in which a black woman who’s endured a lifetime of mistreatment and discrimination shares a number with her sexy dancing household appliances? 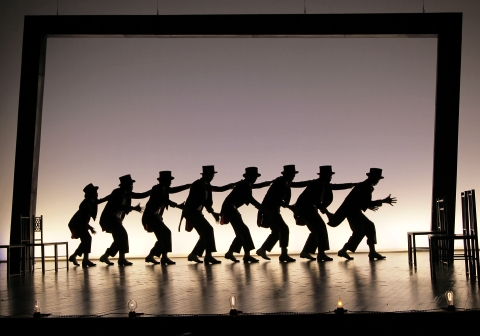 I don’t know what was in the heads of all those other white people at The Scottsboro Boys on Saturday night. Surely, many of them left thinking, “Well, thank God that awful era is over!” The Scottsboro Boys provokes and educates, and that’s good. But I also wonder whether anyone else in the audience was reminded of other, more contemporary, forms of entertainment in which performers who are predominantly black share harrowing, caricatured stories about their experiences for large audiences of white people who are looking for a little scandal and a lot of entertainment.

I wonder whether that middle-aged white couple who sat next to me at the Guthrie will think of The Scottsboro Boys next time they’re sitting on the patio of the Olive Garden in Maple Grove and an SUV of young white guys in backwards baseball caps drives by en route to the local bar, with a track by T.I. or Snoop Dogg bumping on the stereo. What’s going on there? Are those famously thuggish black rappers bridging the racial divide by voicing feelings of alienation and frustration that are part of the universal human experience? Are they telling true stories of inner-city life that need to be heard? Are they exaggerating their experiences for the benefit of their listeners (of all races, including white) and laughing their way to the bank? Are they busting some stereotypes while perpetuating others? Are they participating in a vital form of art that’s alternately offensive and impressive? Yes, yes, yes, yes, and yes.

Gangsta rap is complex, and so—appropriately—is The Scottsboro Boys. What’s past, and what’s present? What’s right, and what’s wrong? Who should tell stories, and who should listen? The answers to those questions are not black and white.