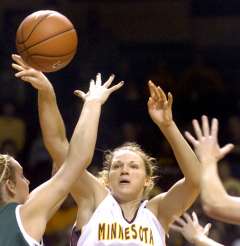 Junior forward Liz Podominick passes out of a double team earlier this season. Even though Podominick and her frontcourt running mate Jamie Broback played limited minutes Sunday against Michigan State, the Gophers frontcourt depth allowed Minnesota to beat the Spartans. Tonight the Gophers play at Michigan. The Wolverines are winless in five Big Ten games.

Minnesota’s women’s basketball coach Pam Borton has stressed all season that scoring this year would have to be by committee, instead of a one-person show.

And so far, that has been just the case.

It seems like almost everyone on the team has starred in point production at some point, as 10 different Gophers have scored double figures in a game this season.

“It’s not necessarily going to be one of those teams where you can lock down on one player and expect the team not to show up,” senior guard April Calhoun said.

The Gophers (11-4, 4-1 Big Ten) will get another chance to show off their deep bench and go for their third Big Ten road win as they take on Michigan in Ann Arbor, Mich., at 6 tonight.

Depth was a key in Minnesota’s huge win over Michigan State on Sunday, as bench players accounted for 55 of the team’s 71 points.

That type of team success is something Borton said she hopes to build on for the rest of the season.

“This much talent on our team could be the best thing that’s ever happened to this program,” Borton said. “We could have the best team that we’ve ever had here if we do this together as a basketball team.

“Whenever you have kids coming off the bench that probably don’t make the opponent’s scouting report, I think we’re extremely dangerous.”

The balanced scoring has allowed Borton to have plenty of backup options if somebody has an off night, which was most evident Sunday.

Junior forwards Jamie Broback and Liz Podominick have been among Minnesota’s most consistent players. They are the only players averaging double figures in points per game, with 12 and 10.5, respectively.

But during the Gophers’ victory over Michigan State, both struggled.

They combined for just six points and were replaced for much of the game with sophomores Lauren Lacey and Natasha Williams, who were dominant in the post and scored 16 and 13 points, respectively.

“It wasn’t Jamie and Liz’s night (Sunday),” Borton said. “I think that’s the great thing about our team. If it’s not their night, it’s going to be somebody else’s night.”

Broback and Podominick, as well as the rest of the starting lineup, will have a chance to redeem themselves today when they face a Michigan team much weaker than Wolverine state compatriots Michigan State.

Borton said Tuesday she did not plan to make any lineup changes as a result of Sunday’s performances, but hopes the game will spark her starters.

“Hopefully this will light a fire and make them step up and be ready to go right from the beginning,” Borton said. “We do have other people waiting in the wings to get an opportunity.”

Senior guard Katie Alsdurf, who has seen her minutes fluctuate all season, said the bench players are accustomed to their roles switching from game to game and won’t be flustered if they don’t see many minutes today.

“We’ve kind of done it all year,” Alsdurf said. “You play 15 minutes and then you play nine. It’s kind of whatever the team needs that night and whatever role they need, we’re willing to fill.”