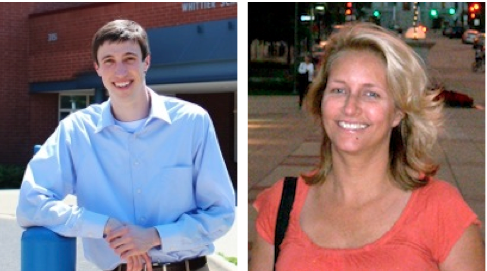 The Minneapolis School Board race in District 4 has been narrowed down to Patty Wycoff, a parent, former substitute teacher and community leader and Josh Reimnitz, co-executive director of the nonprofit organization Students Today Leaders Forever, who spent two years teaching in Atlanta through Teach for America and who is a Big Brothers Big Sisters mentor.

Wycoff was a last minute candidate. She filed when the candidate she supported, Darrell Washington, dropped out because he is an employee of the City of Minneapolis, and therefore is ineligible to hold elective public office. She filed on Tuesday, June 5, the very last day candidates could file.

Wycoff liked Washington because, like her, he is a parent and is involved with his community in Whittier. “He seemed like an intelligent man, who looked at things from all angles,” she said. “He was not a one-sided guy. He makes his decisions based on the input of many. He’s also a great listener.”

Though Wycoff’s decision to run came at the last minute, running for school board is something that has been suggested to her several times in the last four years, she said.

“There were times I thought, ‘Man! I would like to be a part of that board,’” she said. When Washington dropped out of the race, her phone started ringing. She told those who were asking her to run that she needed some time to talk to her husband. After some reflection, she decided: “I want someone similar to myself [on the board.]”

Josh Reimnitz, meanwhile, said he decided in mid-April to run for the seat, based on the suggestion of a friend. One of his main reasons for running is that “we need a sense of urgency that doesn’t exist on the board level.”

What each candidate brings to the table

Wycoff is 43 years old and has lived in the fourth district for 20 years. She has a degree in elementary education and was a substitute teacher for MPS in the 1990s. Her daughter attends Southwest High School, and her son attends FAIR Crystal.

Wycoff has been an active member of PTO since 2003, and has had various leadership roles with the Bryn Mawr Neighborhood Association since 2001.

She was very involved with her community’s response to the Changing School Options program, which caused controversy in 2009. “When Minneapolis posted the plan in July of that summer, the plan had listed Bryn Mawr Elementary to go from a K-5 to K-8 school, close Anwatin Middle School, and cut off our tie to Southwest High School,” Wycoff said. Members of the neighborhood association’s schools committee as well as other stakeholders began to meet in order to put together a proposal highlighting the things that they wanted to change in the MPS plan. Wycoff said she was instrumental in planning the meetings, and hand-delivered the group’s proposal to the superintendent. The proposal was also sent to the school board members.

Reimnitz is 26 years old and moved to Minneapolis in 2010. He is a co-executive director of Students Today, Leaders Tomorrow, a nonprofit organization that builds leadership through service experiences for young people. He also taught fourth grade for two years through Teach for America in Atlanta, Georgia, and did a fellowship in policy and advocacy through TFA’s sister organization, Leadership for Educational Equity (LEE). LEE was formed to support TFA alumni to pursue careers in fields related to education. Reimnitz said that though he wholly supports TFA and their mission, neither TFA nor LEE  have contributed to his campaign. “Because Teach for America is a 501(c)(3), they have to be really careful about how they operate, in what they encourage and how they get politically involved, so they haven’t been in my campaign at all,” he said, “And even LEE, because of the really strict standards in Minnesota — they are a 501(c)(4) — they have not done anything at all for my campaign.”

When Reimnitz was a senior in high school, he took a spring break trip with an organization called Students Today Leaders Forever (STLF) which was formed in 2003 at the University of Minnesota. “I had an amazing time,” he said, with a “phenomenal group of people.” He started a chapter of the group at North Dakota State, and continued to go on STLF each year he was in college. He graduated, moved to Atlanta for two years in TFA program, and returned to STLF when he was offered a position here in Minnesota.

The two candidates agree that class sizes need to be reduced, and that the district needs to be better at communication.

“The communication between the district and communities and families needs to improve,” Wycoff said. “That would be my biggest struggle with the district has been their poor communication. I could cite so many examples but I won’t even go there. It needs to change.”

Wycoff believes there needs to be a communication policy that the district has to abide by when they make changes, “instead of making changes and then communicating afterward, that we’ve made this change and this is what you’re going to do now, because that’s when people get hostile.”

Reimnitz also believes the district needs to improve on communication, especially in regard to the way the administration communicates its policy to teachers, staff, families and students. When he was teaching through Teach for America in Atlanta, he said, he would become very frustrated by the edicts from the administration that he didn’t understand.

Reimnitz says that the “culture” of the district needs to change. “When I say culture, I mean organizational culture, And, you know, the feel of the school when you walk in. I feel the culture within and outside of MPS is fairly toxic. The dialogue around our schools is not very positive right now.”

Where the candidates differ

One major difference between Wycoff and Reimnitz is the way that each of them view the way that the school district hires and fires teachers. “I feel like we could have made some different gains with the contract this year,” Reimnitz said. “The four instructional days are fantastic, but I think we need to go a bit farther. We need to make sure our schools that need it the most are getting the most resources. Our achievement gap is the second worst in the country. We need to start making some changes faster.”

Reimnitz applauded the changes already happening in the evaluation process for teachers. “Something I really support is continuing to have administrators observe, but more than just once, or five or ten minutes, including a peer review process, including parent feedback as well so you get a more well rounded approach of teaching,” he said.

He also thinks we need a stronger administrative pipeline. “We have wonderful administrators and teachers in the district, but we’re not quite where we need to be. Like any large organization, you have some folks who are not quite performing as well.”

Reimnitz would like to see the role of teacher seniority less as compared to an evaluation process. “I think seniority can continue to play a part in personnel decisions, but I think it needs to be based on performance primarily,” Reimnitz said.

Wycoff, by contrast, doesn’t believe that seniority is the cause of the achievement gap. “Show me where seniority, and taking that right away, taking that piece out of the contract, show me how that benefits students. Where does that prove to be the solution to students achieving?” Wycoff said. “I don’t think our teachers having the seniority right is why we have the achievement gap that we do.” At the same time, she does believe the district needs to have better policy in order to keep teachers of color in the district.

Another difference between the two candidates is their views on busing policy. “Our schools are more segregated than they have been in 20 years,” Wycoff said. She believes that the increased segregation leads to lower performance. “I think the zones they created with the CSO are so divisive by income and color and culture — it’s unfortunate,” she said.

Reimnitiz said that integration “starts with the quality of education that we offer,” he said, “making sure that our students are performing at a high level of achievement, that there’s a rigorous curriculum for all students, no matter the color of their skin or how prepared they come in.” Also, Minneapolis needs to do better at recognizing its most positive aspects. “The arts programs at several of our schools are phenomenal — really world class,” he said. “Those types of things that add value even beyond academics — that’s how we can start attracting primarily white students, white families, back into Minneapolis Public Schools. Right now our transportation issue is not to transport students of color and students on free and reduced lunch to other schools. It’s more to allow our white affluent students to transport elsewhere and out of the district, and I don’t think that’s healthy for us as a city, and I don’t think that’s healthy for the students as they enter adulthood in a global world.”