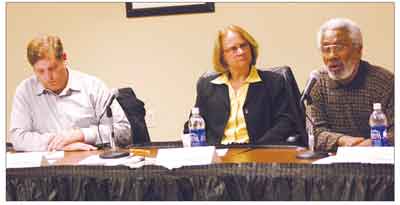 One of the most important items appearing on the November 7 election ballot for Minneapolis residents will be the choosing of new school board members. Parents and students will be affected by the election choices for several years.

That importance was evident in the collaboration of a wide and diverse group of community-based organizations, led by the Minneapolis Urban League, to sponsor a forum on Thursday, September 21, inviting all of the candidates.

The upcoming school board election is very important to the entire city, but to the communities of color it is crucial. It is common knowledge that Minneapolis Public Schools (MPS) is at a crossroad. Some refer to it as being in a crisis situation.

To be sure, the MPS is at a pivotal stage that will require some fundamental changes that must be made by the new school board. Indirectly, changes within Minneapolis Public School District #1, the largest district in the state and the one with the largest population of students of color, could impact the entire state.


Formidable tasks ahead
Among the many urgent fundamentals that the new school board members will have to face are:

• selecting a new superintendent (the district has had five superintendents since 2003);
• slowing the rapid exit of students (student enrollment has declined 20 percent in the past five years);
• clarifying the role of charter schools;
• addressing budgetary considerations;
• retaining quality teachers;
• addressing the continuing achievement racial disparity gap (latest figures indicate that African American students still have a graduation rate of 50 percent compared with Whites at 77 percent); and
• addressing disparities in school suspensions (African American students are suspended at six times the rate of Whites).

Those are just a few of the challenges that face the new school board members who will be elected November 7. A disproportionate burden will be placed on the four newly elected board members, for they as a group will constitute a majority of the seven-member board and could be pivotal in mapping out a new direction for the district.

The candidates
Five of the candidates appeared at the September 21 Urban League community forum: Tom Madden, a marketing specialist; Pam Costain, a director with the Wellstone Alliance; T. Williams, a long-time community activist and planner; Chris Stewart, a business consultant for the state; and Doug Mann, a certified nurse.

Two African Americans were among the candidates, Chris Stewart and T. Williams. The other three candidates all claim organizational ties or other relations with communities of color.

The panel moderator was an articulate young woman named Tene Wells who insisted that panelists stick to the planned format. The questions of the primary discussion were prepared in advance, and each panelist was required to answer the same question before moving to the next one.

The format was non-adversarial. There was no back-and-forth, give-and-take between candidates. Yet, the answers to questions asked provided a clear picture of each candidate’s views on the subjects. The audience had been given cards to write down their questions, and after completion of the prepared questions, the moderator directed a few audience members’ questions to the candidates.

It’s safe to say that, for the most part, all five candidates were in general agreement on most of the questions. The evening gave little evidence of becoming a hotly contested or controversial debate session, yet the answers and individual elaborations projected a shared sincerity and concern for making necessary changes in the Minneapolis Public Schools system.

There was one glaring exception to the unanimity of the contenders in answering the questions, and that was in regard to charter schools. Tom Madden expressed strong opposition to them, implying they are an additional strain on the district budget. Other panelists supported them to varying degrees.

Costain, the only woman on stage, stated, “Charter schools are here to stay, so we may as well learn how to live with them.” Williams saw them as a valuable and innovative tool when properly used and administrated.

Another bit of dissent arose over the question of recruiting more African American teachers. While all agreed on the need, the methods recommended for recruiting differed. Stewart was adamant in his advocacy for a different approach altogether. He stated that we cannot continue to rely upon importing African American teachers from the South: “We are going to have to start growing our own.”

Another question that evoked disparate responses concerned surplus school buildings — what should be done with the boarded-up buildings? One person suggested private sales, but T. Williams, the senior member of the panel, vigorously dissented, stating that if and when the population expands again, new facilities would be twice as expensive. He suggested that these facilities be retained for nonprofit usage. Other panelists seemed to agree.

A follow-up to the empty building question was the problem of the continued loss of students from the system. It was noted that students of color were leaving the district at a higher rate proportionately than White students.

One panelist suggested that exit polling be done to find out why they are leaving and what changes would be necessary to maintain them in the district. It was also noted that a loss of students also affects the overall district budget, inasmuch as state and federal funds are allocated on a per-pupil basis.

Another important question that received unanimous agreement was the matter of all-day, every-day kindergarten. It was noted that Minnesota is one of just 18 states that provide only half-day kindergarten.

Doug Mann, a former Minneapolis NAACP activist, injected the matter of school desegregation into most of his answers. He attributed much of the present problems of the district to segregation.

The two African American candidates
T. Williams is the veteran and perhaps the most formidable candidate. He presently is employed as a senior project associate with Rainbow Research, Inc., but his community involvement and monitoring spans more than four decades. It dates back to the unrest of the 1960s when he and Larry Harris did the research leading to the establishment of the Urban Coalition.

Williams later became executive director of Phyllis Wheatley Community Center and an ombudsman for the state corrections department under three different governors. He then became a fellow at the Humphrey Institute, from which he did research for the initiation of projects in Chicago and Kansas City, among others.

Williams also did a stint as public housing director for the city. When asked why he chose to run for the MPS Board at this stage in his life, he replied, “I feel that my extensive experience in community building is sorely needed at this time.”

Chris Stewart is an articulate, determined young man who has strong ideas on remedying the ills of the system. His basic tenet regarding education is that the schools must prepare students for the world in which we live.

Stewart contends that secondary schools must place more emphasis on preparing students for career pathways leading directly to college or to the rapidly expanding technical world. He maintains that college preparation should not be the only option, inasmuch as fewer than 25 percent will end up with four-year degrees.

On the other hand, our highly technical society demands other marketable skills. As a business consultant with the government, Stewart indicates that he sees too many of those quality jobs unfilled. He also agrees with candidate Mann that the ultimate racial solution in America is integration, and feels that the Civil Rights Movement should not abandon integration as an aim.

Listening to the five candidates vying for the four vacant seats on the Minneapolis School Board for a couple of hours left this observer convinced that each has the capacity and determination to add meaningful contributions. One sad commentary to the whole evening was the dismally small audience turnout. With so many sponsors and soul food provided for attendees, it is unfortunate that so few of our people seem concerned enough to come.