Years ago a college classmate of mine from New York visited a mutual friend of ours who owns a ranch in southern Arizona. Enchanted by the beauty of the place, Mark went for a walk by himself. Finding himself in a peaceful valley, he laid down on his back and closed his eyes so that he could listen to the sounds of nature. He may have dozed. In time he became aware that there was someone standing over him. When he opened his eyes he faced a gun cocked and pointed at this head. It was a border officer, who took Mark (who had no identification) into custody. There they grilled him about whether he was a drug dealer or a smuggler. Mark is a light-skinned African American with Native American blood. He is also an extremely well-spoken lawyer who was able to talk himself out of his predicament. Many other brown-skinned Americans in Arizona aren’t so lucky:

What do all of the above people have in common? They are Latinos. They are Americans or permanent residents, lawfully present in the U.S. And, according to a 32 page complaint filed by the Department of Justice this week, they are victims of racial profiling and discrimination by Sheriff Joe Arpaio of Maricopa County, Arizona. 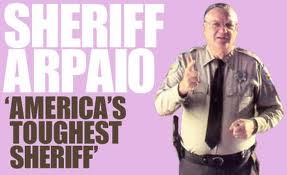 Maricopa County, which includes Phoenix, is the 4th largest county in the U.S. It covers more than 9,200 square miles and according to the 2010 census, is 59 percent White and getting less so. In fact, the Hispanic population in the county nearly doubled during the decade between the 2000 census and the 2010 census.

Following years of investigation into the discriminatory practices of the MCSO, the Justice Department did something according to the Assistant Attorney General that it has done only once before in its 18-year history of police reform work. It filed a contested lawsuit to stop discriminatory and unconstitutional law enforcement practices. The complaint sets out three categories of unlawful conduct: (1) a pattern or practice of discriminatory and otherwise unconstitutional law enforcement actions against Latinos in Maricopa County; (2) discriminatory jail practices against Latino prisoners with limited English language skills; and (3) a pattern or practice of retaliatory actions against perceived critics of MCSO activities. These activities violate the Fourth Amendment and the Due Process and Equal Protection Clauses of the Fourteenth Amendment.

According to the complaint, the Justice Department investigation found numerous examples of discriminatory conduct by MCSO, including that Latino drivers in the Phoenix area are nearly nine times more likely to be stopped by MCSO officers than non-Latino drivers engaged in similar conduct. In addition to engaging in discrimination in determining whom to stop, officers have been illegally detaining Latino passengers to determine immigration status. Once officers stop drivers whose passengers appear to be Latino, they will typically question the passengers regarding their immigration status and ask for identification. When asked about an American Latina who was taken into custody for four hours to determine whether she was lawfully in the United States, Arpaio was quoted as saying: “That’s just normal police work. You sometimes take people in for probable cause for questioning and they’re released.”

The complaint also reports that in making immigration enforcement its primary focus, the MCSO has failed (among other things) to adequately respond to reports of sexual violence, including allegations of rape, sexual assault, and sexual abuse of girls. This has exposed women and girls, who constitute the majority of victims of crimes of sexual violence in Maricopa County, to a disproportionate risk of physical and psychological harm. The complaint points out that a law enforcement agency ordinarily would be expected to prioritize more serious offenses, such as crimes of sexual violence, over less serious offenses, such as low-level immigration offenses.

An excellent editorial by Andrew Cohen in the Atlantic points out that while the allegations in the complaint are appalling, “it’s hard to get through them without at least thinking about what the enforcement of SB 1070 might be like if the Court permits the state to expand its power to arrest its resident Latino population. What is the value of Arizona’s in-court assurances that it will respect the constitutional rights of these people when the federal government itself is alleging such risible proof of how bad things are today?”

Last month, two years after Arizona enacted the immigration law known as SB1070, the U.S. Supreme Court heard arguments regarding the law’s validity. The law includes a provision (which has been temporarily halted through an injunction) that requires police to check the immigration status of all persons they stop or arrest if “reasonable suspicion” exists that they are in the country illegally. The U.S. government argued that requiring such status checks would disrupt the federal government’s focus on noncitizens convicted of serious crimes because it shifts the allocation of resources to non-serious offenders. While the questioning from the Justices suggests that it may lift the injunction, a number of Justices asked how the provision would be applied in practice.

Depite the fact that Arizona Governor Jan Brewer continues to insist that SB1070 is not about race, we don’t have to look too far to get our answer. Sheriff Joe and his “boys” have been taking matters into their own hands despite the injunction. As a result, Justice Department complaint clearly spells out numerous examples of discriminatory conduct. If anyone thinks it is just a necessary coincidence of immigration enforcement that Latinos are being targeted, check this out. On the very same day that the Supreme Court heard its arguments, Michael Hethmon, general counsel for the Immigration Reform Law Institute and one of the legal minds behind SB1070 shamelessly acknowledged the real concerns underlying SB1070, “Immigration is on track to change the demographic makeup of the entire country. You know, what they call ‘minority-majority.’ How many countries have gone through a transition like that — peacefully, carefully? It’s theoretically possible, but we don’t have any examples…”

He went on to explain how a Supreme Court victory in SB1070 would pave the way for similar laws to be passed in other states, particularly those where “nativist sentiment” runs high:

copycat legislation will explode. This is the classic environment for, if you will, sort of nativist-type sentiment. . . . It should explode at the states or — even better — [Congress] will be provoked to take action.

“Even better?” Have we honestly reached the point in America where our highest court will let the nativists (also known as “white supremacists”) take over?