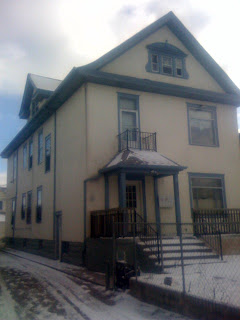 Bulldoze the house and make it a parking lot or designate it as a historic landmark and restore it as livable space — that’s the choice, and dilemma, for neighbors of the Fjelde House at 3009 Park Avenue in Minneapolis and James and Kristen Schoffman, who bought the building, planning to tear it down.

On Saturday, the Housing Committee of the Central Area Neighborhood Development Organization (CANDO) held a special neighborhood meeting at La Vina restaurant to discuss the future of a home that once belonged to Pauline Fjelde, an artisan most known for embroidering the first Minnesota State flag along with her sister Thomane. The home was designed in 1907 by architects Boehme and Cordella who also designed—among other notable structures—the Swan J. Turnblad Mansion (current home of the American Swedish Institute) at 2600 Park Avenue, just four blocks north of the Fjelde home.

Fjelde lived in the house on 3009 Park Avenue between 1908 and 1918, which according to Brian Finstad, a CANDO committee member, was “a period of significance” in her artistic life.

The current owners of the property, James and Kristen Schoffman, bought the building for $130,000 in order to raze it and create a parking lot for their other property in the area, according to Dan Kelly, Schoffman’s lawyer, who spoke at Saturday’s meeting.

Dan Kelly said that the building, originally designed as a duplex, has over the years been used as a 5-plex, and that in order to legally use the house now, it would have to be converted back into a duplex.

Todd Elkins, an architect, said that it would cost a half million dollars to convert the building back into a duplex.

Kelly said that the house sat vacant for 419 days before the Schoffmans bought it, and that it was in extreme disrepair. According to Kelly, frozen pipes that make the building’s plumbing no longer operable and flooding have caused damage to the house.

Kristen Schoffman, who also spoke at the meeting, said her most immediate concern is safety from vagrants, theft, and possible fires. She said she feels “the safest, most economical solution is to raze the building and make it an empty lot.”

Brian Finstad, who spoke in favor of preserving the home as a historic building, said it could be turned into a monument. Finstad said that he had called the police and found that there had been no 911 calls about the property.

Finstad said that he was concerned about keeping a boundary between the commercial and residential districts. “I feel bad that there was money invested,” Finstad said, “but it was bought under speculation that was not its intended use.”

Ryan Knoke, who led the first historic walking tour in CANDO, and who owns a home on 37th St and Park Ave, said the neighborhood needs to “preserve, maintain, and market our history.”

Near the end of the meeting, James Schoffman reminded the attendees that he would lead a tour of the interior of the Fjelde house.

Bob Glancy, a historical researcher, said that in terms of historical designation, the house’s exterior is more important than its interior. Glancy said that there are few rules, once a house has been designated as a historical landmark, about its inside. The building’s outside appearance is what is preserved for the benefit of the general public.

Corrine Zala, a real estate agent who lives in the neighborhood, made a motion that CANDO request Minneapolis Councilmember Elizabeth Gliddon propose a designation study from the Minneapolis Heritage Preservation Commission (MHPC). The motion was passed, (all residents of the neighborhood had a vote) and now will be put to a vote by the CANDO board of directors.

Sheila Regan is a theater artist based in Minneapolis. When not performing or writing, she serves as educational coordinator for Teatro del Pueblo.