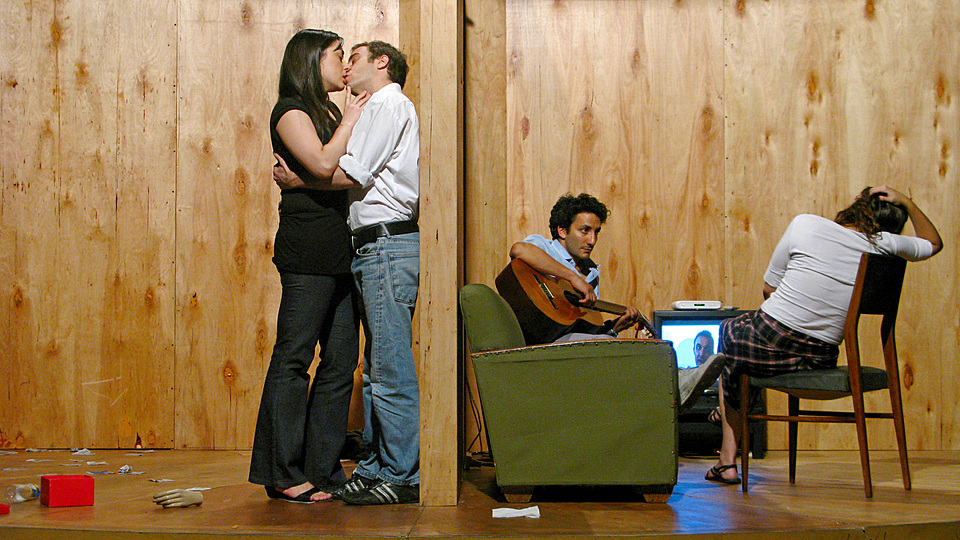 The Walker Art Center saved the best for last in this year’s Out There Series, presenting Mariano Pensotti’s El Pasado Es Un Animal Grotesco (The Past is a Grotesque Animal) from January 26-29 at the McGuire Theater. The play, which had a successful year-long run in Argentina and is now on tour, is a riveting study of the lives of characters in four different stories that interconnect in coincidental ways near the end.

The set for the play is a large rotating circular structure, with four sectioned-off playing spaces. At the beginning each of the stories have their own section, but as the stories progress, and the characters travel from place to place, props and set pieces are used for more than one storyline, adding to the chaos of the characters’ lives.

Each of the stories begins with protagonists in their 20s, at the start of the Argentinean economic collapse that lasted from 1999-2002. While the play isn’t about the collapse, that serves as the backdrop for the majority of the play, as the characters—who come from different socio-economic backgrounds—deal with love, loss, and in some cases some pretty bizarre situations.

The play is told mostly in voiceover. Actors rotate between being a narrator with a microphone and joining the players, who sometimes speak but generally are restricted to using body language. The narrators sometimes face the audience, but each narrator often becomes a kind of extra character, as if speaking to one of the characters but actually filling the audience in on what has happened. This allows the actors to show their abilities to demonstrate their characters physically—and they are all very good.

The voiceover technique makes the play documentary-like. In the program notes, it says that the writer drew in part from stories from his own experience. So the whole thing rings as a particially true historical piece. Whether the stories are true or not (I’m guessing the one about the man that finds a severed hand in the mail is not) doesn’t matter so much, because the actors are so gifted at creating truth on stage.

The voiceover also allows for Pensotti’s clever style to come through. The one bummer about the show is that if you don’t speak Spanish, your attention is divided between the cleverly written supertitles and the wonderful acting done on stage. I almost felt like this would be one case where I would have liked to have an earpiece with spoken translations, so I wouldn’t have to veer my eyesight from the wonderful performers.

It was a great end to the Out There Series. But I’m left with a question. Why call it “Out There”? The title conjures up images of work that is pushing boundaries in some way, or that is weird or new or different. The Walker’s website says it is “the region’s premier platform for alternative theater and new performance.”

I wouldn’t say that the four pieces in this year’s series—Young Jean Lee’s Untitled Feminist Show, Rabih Mroué’s Looking for a Missing Employee, chelfitsch/Toshiki Okada’s Hot Pepper, Air Conditioner, and The Farewell Speech, or this last piece—are conventional, but none of them blew my mind in terms of their “out-there”-ness. Certainly there are lots of “alternative” things about them: the nudity in the Young Jean Lee piece, the live drawing structure of Mroué’s work, Okada’s use of stream of consciousness and bizarre dancey movement, and Pensotti’s interconnected storylines. Of the four works, Toshiki Okada and Rabih Mroué were doing something new. Young Jean Lee might be on to something, but honestly her piece didn’t quite seem ready for performance yet. Nudity isn’t shocking any more, and the content of the show seemed to come from a Feminism 101 class. El Pasado Es Un Animal Grotesco was the least “Out-There”-ish, and yet it was the most successful if you take that criterion away.

Sometimes, you don’t need to be “Out There”. Every piece is going to necessitate a different form and a different approach, and each artist needs to be free to make the best work they can. It almost seems like “Out There” is a limitation—not that the artists were trying to fit into that mold, but that curatorially, pieces that weren’t necessarily “groundbreaking” but were still good, were being labeled/marketed in a certain way contrary to their actual content.

In any case, El Pasado Es Un Animal Grotesco (The Past Is A Grotesque Animal) was completely worth an evening’s attention.