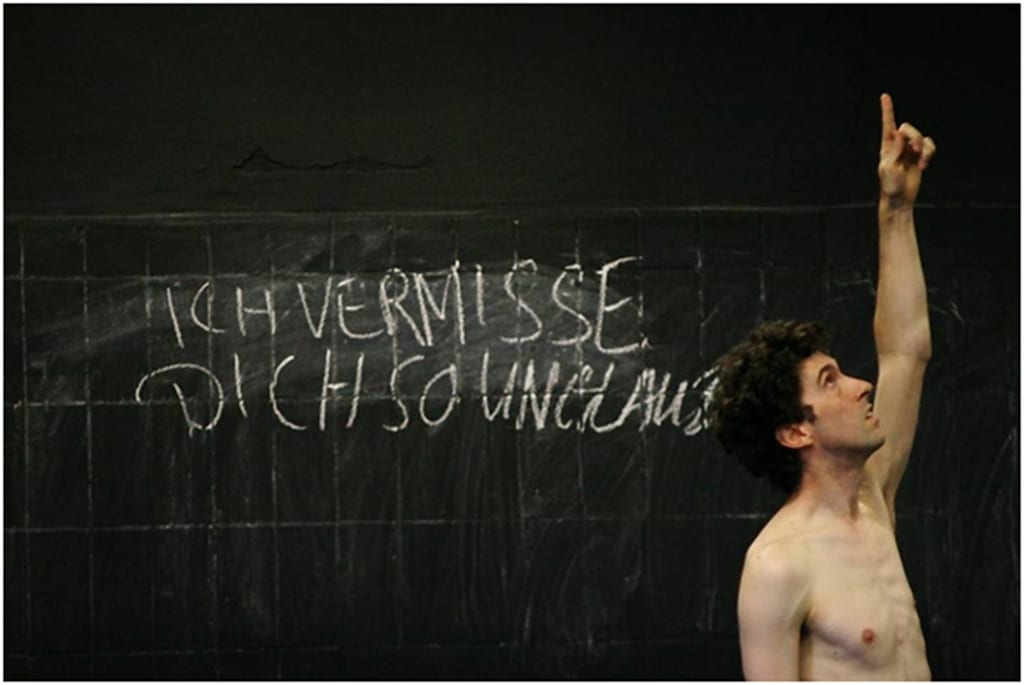 What goes up must come down. Photo courtesy Walker Art Center.

Our sixth-grade music teacher would occasionally have talent-show days, when we’d be invited to take turns standing before the class and demonstrating whatever talent we chose to muster. With no false modesty, I’ll say that I was a big hit with my memorized Bill Cosby standup routines. One of my classmates didn’t go over so well, though: when she performed her original interpretive dance to some pop hit of 1986, the kids laughed and she ran from the room crying, thus living the nightmare of many performing artists: you put your soul nakedly on display, and everyone else thinks you look ridiculous.

The performers seen and heard in Devotion—the Sarah Michelson piece being presented this weekend at the Walker Art Center, a co-commission involving no fewer than 28 sponsors and presenters (I counted)—do not look ridiculous. They’re extraordinary creatures, moving with power and precision. However, they’re put to the service of a piece that, while technically accomplished and clearly very personal, is ridiculously pretentious and becomes ridiculously boring.

Devotion comprises three principal sections. In the first, dancer Rebecca Warner, in white shirt, shorts, and sneakers, moves about the stage with a cycling and slowly developing vocabulary of movements that include a good deal of jogging in circles. As she dances, Michelson, sitting at a table planted in the middle of the audience, reads a Richard Maxwell text that elliptically traces connections between the Biblical creation story and a present-day life.

This yields to an interlude in which Mary (Non Griffiths) and Jesus (James Tyson) dance about to Philip Glass’s epic Dance IX, interspersed with selections of original music by Pete Drungle. The original music becomes more Glass-ish for the final section, in which Adam (Jim Fletcher) and Eve (Eleanor Hullihan) duet, outfitted in track pants and a tennis skirt and jogging in patterns as if they’re training for the Eden Olympic Team. (Psst! You made the cut, guys.)

Finally, Warner returns (“Oh, God,” groaned the man sitting next to me, in what did not sound like a devotional exclamation) for a jazzy spin while Michelson tells us about how life is complex and confusing and frustrating, but that’s just how life is and it’s okay because we are all perfectly ourselves. In a concluding coup of faux-modest pretension, the performers do not return for a curtain call.

The angular choreography is often impressive and even pleasing to look at, but it builds almost no sense of momentum, emotional or otherwise. Some would say the same thing about Glass’s music, but at least Glass had the decency to let everyone at his loft concerts get high on the substances of their choice and to tell the audience—famously, for his acclaimed opera Einstein on the Beach—that they could feel free to get up and leave for a while, because pretty much the same thing would still be going on when they got back.

Dance IX—a piece matched in tone by Drungle’s original music—is from Glass’s superstar moment in the mid-80s, and it’s one continuous climax, bass throbbing and vocalist chortling. It’s played in the McGuire Theater at high volume, and the clusters of bright lights suspended low above the stage, combined with lights turned to the audience, heat the theater to a broil. So we sit there, being buffeted by heat and by noise, as dancers stand in the corner of the stage, or change their shoes, or wander confusedly back to the cables suspending the rigging. If the dramatic sensory experience is meant to enhance the impact of the dance, it doesn’t. If it’s meant to stand in ironic contrast to the dance, it’s a cruel irony indeed.

It’s not that the themes of Devotion are entirely opaque—note the title, note Jesus’s immobility while Mary exhorts herself running backwards, note the several times Eve falls into Adam’s arms—it’s that they’re presented in a manner that’s not moving, it’s just annoying.

Michelson’s biography in the program is telling: instead of actually saying anything about herself, she uses the space to list a few dozen “artists among whom she works.” Personal? Clearly. Meaningful to her, and to those close to her? Sure. Repetitive? Yes. Pretentious? Yes, in the guise of generosity. Meaningful to the uninitiated? Nope. Does she care? Seemingly not.

Postscript: After writing this review, I read Theresa Madeus’s blog post about the show and was unsurprised to learn that “buzz…skittered around facebook when Charles Campbell quoted a bit from an interview with Sarah Michelson (as quoted on the Walker blog) on his status- ‘I’m trying to make dance that’s inaccessible, because the more you make it accessible the more it seems unnecessary.'” Touché?